After plenty of time, effort and negotiation, the American feels like a full-bodied conference with a promising future. Finally.

With the addition of the Naval Academy, which is ending more than a century of independence, the American has a dozen teams, two divisions and a championship game.

Yeah, it’ll always be an imperfect situation, with teams situated in multiple time zones and separated by as many as 1,700 miles. But it beats the days when the old Big East was losing members to the ACC, Big Ten and Big 12 on a semi-regular basis.

For the first time, the American will be broken into an East and West half. The East is comprised of Cincinnati, Connecticut, East Carolina, Temple, UCF and South Florida. Navy will operate out of the West, where Houston,
Memphis, SMU, Tulane and Tulsa join it. There’s an unmistakable Conference USA flavor, since all but the Owls, Huskies and Midshipmen were one-time members of the league. Still, the American isn’t feeling fussy these days. It’s just thrilled that the spinning carousel of realignment has been replaced by a degree of stability.

Out of the East, everyone is looking up at Cincinnati, at least as far as preseason projections go. The Bearcats are home to the league’s best quarterback, Gunner Kiel, and the most potent offense. UCF and Temple, though, could provide an antidote with two of the league’s best defenses. The Owls, in particular, are rock solid from front to back. However, both contenders must visit Nippert Stadium, which has undergone an $86 million facelift.

Based on history, it’d be silly to dismiss East Carolina, which has won at least eight games in three straight years, including four versus ACC opponents. However, no team in the league is enduring more big-name turnover than the Pirates, who’ll be without three offensive stalwarts, QB Shane Carden, WR Justin Hardy and coordinator Lincoln Riley.

Rounding out the East are UConn and South Florida, offensively handicapped programs led by young coaches with a lot to prove. Bull Willie Taggart, in particular, is under the gun after his first two seasons produced just six wins and a mere 15 points per game.

The American’s influx of coaching talent is concentrated in the West bracket. In Tom Herman, Chad Morris and Philip Montgomery, Houston, SMU and Tulsa, respectively, upgraded with three of the most celebrated offensive coordinators in the game. Herman is in the best position to deliver immediate dividends, though Montgomery inherited a roster flush in vets, so the Hurricane shouldn’t be overlooked. The Mustangs have a long journey ahead, but the right Sherpa to gradually build a winner and change a culture.

Memphis is the ECU of the West Division. The Tigers are coming off a remarkable 10-win season, and keeping Justin Fuente on staff was a coup. But can they keep rolling after losing so many defensive starters to graduation? It’ll be very interesting to see how Navy fares as a member of a league. Houston has more talent, and Memphis earned a share of the 2015 crown, but it would be misguided to think the Mids can’t compete, especially with record-setting senior Keenan Reynolds at the controls for one more year.

Tulane is a dichotomy entering 2015. While the Green Wave was dreadful throughout last season, it did use a lot of young kids who now have a foundation on which to build. The staff needs this team to rebound, because a third losing season in four years could result in a trigger-happy administration by December.

Buh-bye, tri-champs, which Memphis, UCF and Cincinnati claimed in 2014. Hello, clarity. And with that clarity comes a better a chance that the title game winner will represent the Group of Five in a New Year’s Six bowl game. The American is still the hunted on college football’s food chain. But if it can ward off poachers, this conference has a chance to build some momentum, foster new rivalries and challenge the Mountain West as the premier non-Power Five league.

– Herman won’t waste much time showing why it was so important to can Tony Levine, even after back-to-back eight-win seasons. Houston finally has a coach capable of maximizing the school’s talent and facilities.

– Temple will rank among the top 5 nationally in most defensive statistical categories.

– American defenses, who’ve spent years readying for the perennial onslaught of up-tempo spread offenses, will have no clue how to contain Navy’s triple-option attack.

– Cincinnati will lose a game this season in which it scores six touchdowns. Gunner Kiel and the offense will be dynamite, but the D will once again be a liability.

– There’s a changing of the guard at UCF, which will help turn LB Chequan Burkett, CB Chris Williams, WR Jordan Akins, DT Jamiyus Pittman and OT Chavis Dickey into some of the league’s budding young stars.

– Tulsa has enough talent to win the conference. It’ll settle for its first bowl game in three years in Montgomery’s head coaching debut.

– Led by CB William Jackson and SS Adrian McDonald, Houston will have a better secondary than more than half of the Big 12 teams.

– Bob Diaco will privately wonder why he ever left Notre Dame for UConn, a team that’s had offensive rigor mortis for five years. Everyone else will wonder how Randy Edsall had success in Storrs for so long.

– Sophomore QB Kurt Benkert won’t be Shane Carden at East Carolina, but he’ll do a decent impression after serving as the backup in 2015. The Pirates still have weapons and the desire to air it out.

– Memphis QB Paxton Lynch won’t explode into a superstar, as so many seem to expect. He still has issues with his mechanics and decision making, and there’s no legit No. 1 receiver on the roster.

– After serving as a career complement, Navy FB Chris Swain will deliver a monster final season in Annapolis. Someone other than QB Keenan Reynolds will pile up numbers in this offense, and Swain is at the head of the line.

– NFL scouts will begin flocking to Dallas to check out Shakiel Randolph. He’s a long and athletic defender who’ll flourish in the new linebacker-safety hybrid now being employed at SMU.

– The new up-tempo offense at South Florida will bear little fruit. All of the schematic differences in the world don’t make a difference if the right quarterback isn’t at the controls of the system.

– Tulane will be an improved special teams unit away from being sneaky-good in 2015. There’s ample untapped potential in New Orleans, though QB Tanner Lee must stay healthy and take the next step.

Tulsa – Temple deserves some love here as well, but the Owl defense has already generated a healthy number of bandwagon jumpers this offseason. The Golden Hurricane, though, is liable to catch everyone off guard in the fall. New head coach Philip Montgomery inherits a team that’s won just five games over the past two seasons. But he and his staff also inherit a fair amount of talent and experience, including his predecessor’s starting quarterback, entire O-line and leading back, receiver, tackler and sacker. If veteran coordinator Bill Young can get more from the defense, Tulsa isn’t as far as it might seem from contending for the West Division.

Team That’ll Disappoint
Memphis – The coach, Justin Fuente, and the quarterback, Paxton Lynch, are still in the Bluff City, so the Tigers will remain on a positive trajectory. But this program lost far too much talent to duplicate last year’s 10-win, co-champ team. Memphis was especially hard hit on defense, the underrated unit that initially fueled a revival beginning in 2013. Not only have eight starters graduated, but linchpin coordinator Barry Odom also left for a better gig. Sure, the Lynch-led offense is in a better position to pick up more slack, but without the salty, blue-collar D, the Tigers are destined to take a step in reverse in 2015.

Game of the Year …
Cincinnati at Houston, Nov. 7 – There are a handful of teams capable of competing for an American crown in 2015. The Cougars and the Bearcats are two of them. Houston hosts Cincy at TDECU Stadium in the middle of a pivotal three-game homestand that starts with Vanderbilt and concludes with a visit from Memphis. This will be an intriguing and consequential matchup that pits Cincinnati QB Gunner Kiel and his deep receiving corps versus Houston’s ball-hawking defensive backfield. It’ll also be the first meeting between one of the league’s old hands, Cincy coach Tommy Tuberville, and one of its rising stars, Tom Herman.

Coach on the Hot Seat

Willie Taggart, South Florida – Up-and-coming young coach meets Sunshine State program with untapped potential. Sure seemed like a college football love story that would have a happy ending. Taggart’s first two seasons in Tampa have not gone as planned. The Bulls have won just six games, hamstrung by a feeble offense and a general lack of talent compared to the rest of the American Athletic Conference. Taggart responded by shaking up his staff after the regular season, a telltale sign of desperation, but he could be next if USF doesn’t take a quantum leap in 2015. The Bulls continue being compared to rival UCF, which is making Taggart’s quest for progress and respect that much harder. 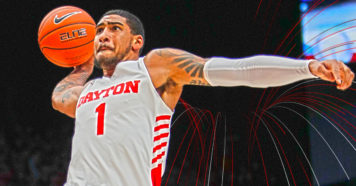 We knew Obi Toppin was good… but this good?