After weeks of uncertainty surrounding the upcoming college football season, 99 percent of the Football Bowl Subdivision (FBS) athletic directors polled by Stadium believe a season will be played in one form or another. 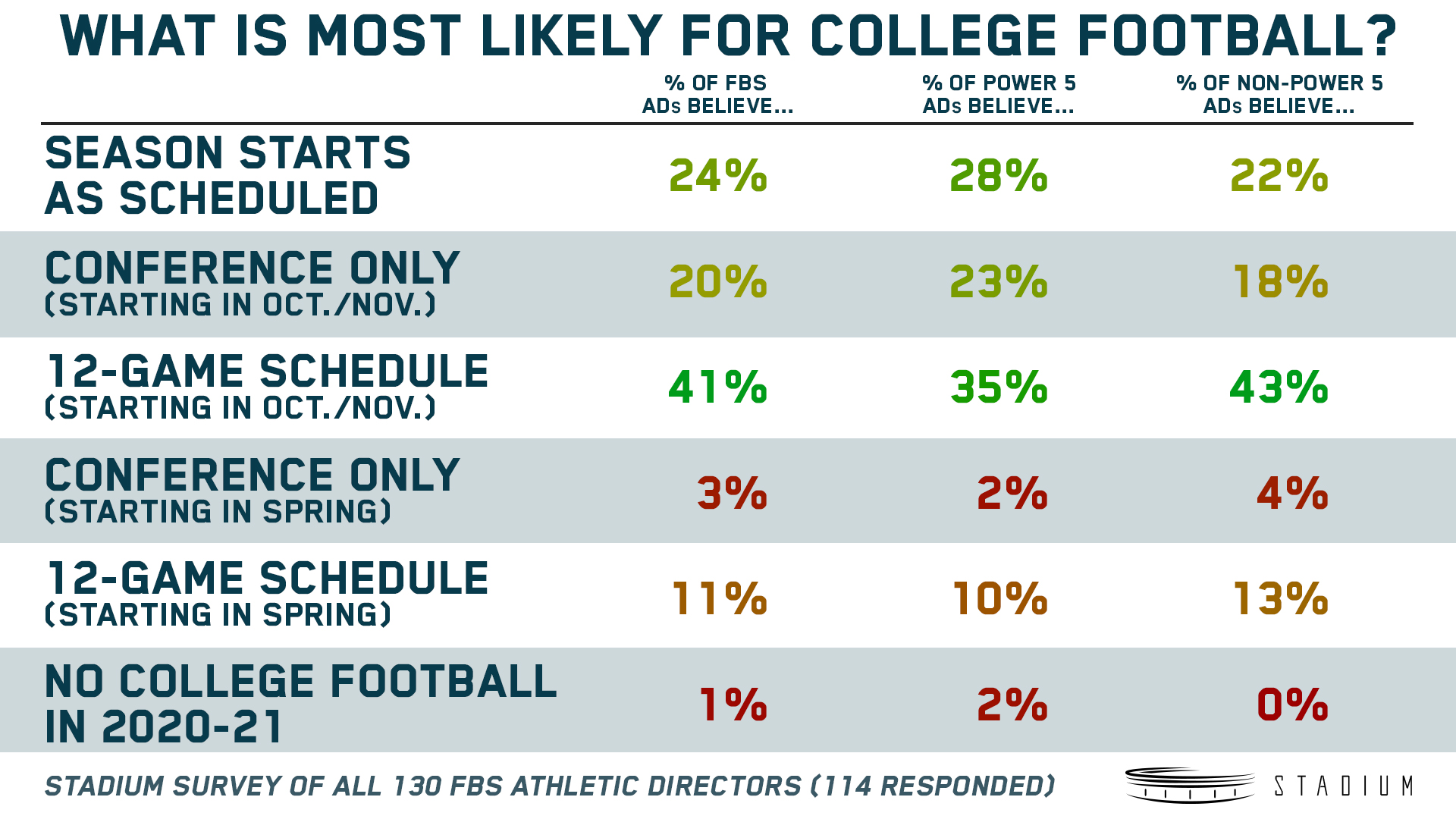 When exactly the season begins is the biggest question. Even though the start of college football is still four months away, 75 percent of the athletic directors believe the season will be delayed.

“Given the medical and governmental leadership opinions, it is reasonable to believe some compromise to the start of the season lies ahead,” a Power Five AD said.

Sixty-one percent of the ADs predict the season won’t start until October or November, while 14 percent think the season won’t begin until the spring semester in January or February. One Power Five athletic director doesn’t expect the season to be played at all because of the impact of COVID-19.

The athletic directors, who were initially surveyed a month ago by Stadium, also were asked how optimistic they are for a 12-game season in the fall compared to last month. Eighteen percent were less optimistic, 14 percent more optimistic and 68 percent had the same optimism as a month ago. 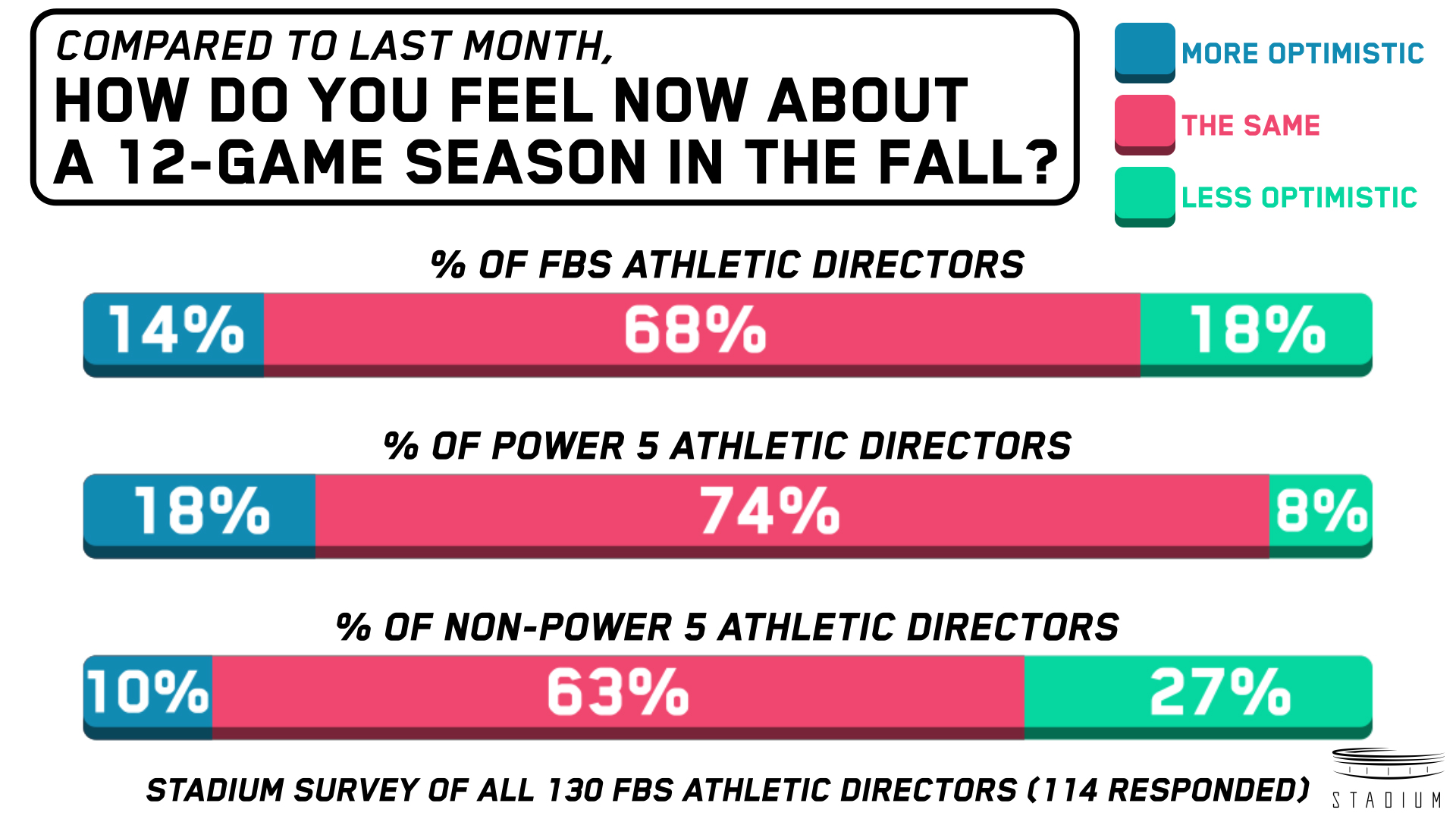 Of the 130 ADs contacted by Stadium last week, 114 participated in the anonymous survey.

On Aug. 29, the 151st season of college football is scheduled to kick off with seven FBS games, starting with Navy and Notre Dame in Ireland. However, only 24 percent of the ADs believe it begins on time.

What if the worst-case scenario comes true and the college football season doesn’t get played during the 2020-21 academic year?

“There’s too much money at stake, it impacts too many people,” a Power Five AD said. “If there’s no football, we will have bigger issues. This will be worse than the Great Depression and make the 1930s look like a cakewalk.”

If not Aug. 29, then when would the season start?

Everyone is waiting for the all-clear message from federal and state government officials, health officials and society as a whole regarding when everything can return to as close to normal as possible. But until then, university presidents, conference commissioners and athletic directors continue planning for that day. There is one certainty: Multiple conference commissioners have indicated that college athletics will not be held until students can return to campus.

With a number of universities, including Oklahoma and Ohio State, having already canceled on-campus summer classes, and anywhere from a four- to eight-week period needed for student-athletes to get fully conditioned to be prepared to play, it seems virtually impossible that the season could start Aug. 29.

If the season is delayed, 61 percent of the athletic directors think it would start in October or November, with 41 percent believing it would be a 12-game season, and 20 percent predicting an eight- or nine-game conference-only schedule.

Also, 14 percent of the athletic directors believe the season will not start until after the Christmas holiday break, beginning in either late January or February during the spring semester.

“Spring gives us the best chance to have a full season,” a Power Five AD said. “It’s been hard for many to process this, but the longer this goes, the more this will become the best option.”

There would be many challenges with a spring season, including:

But those problems can — and will — be dealt with in order to get football played.

“We have to do everything we can to get 12 games in,” a Group of Five AD said.

A spring season could mean the College Football Playoff semifinals or title game could be played around Memorial Day. With only about 90 days until the start of the 2021 season in that scenario, would that actually reduce the number of coaches being fired/hired? Imagine that, a world in which no one is on college football’s hot seat.

“We should take the earliest window that would allow us to play 8-10 games and go with it,” a Group of Five AD said.

Split the season between the fall and spring semesters?

This was the athletic directors’ most popular response – at least for now, anyway. There are some obvious challenges for starting in October or November and ending in February or March.

“It seems there’s a concern for weather in certain regions by running the season through February,” a Group of Five AD said. “Shortening the schedule to conference-only [games] would effectively have the national championship and Super Bowl on top of each other.”

Another Group of Five AD said it’s imperative to play a 12-game season “no matter when you start.”

“That’s a lot of revenue for anyone to give up,” the AD said, “especially if you play in a 100,000-seat stadium and 80 percent of your revenue is tied to football. I’m not sure how Power Five schools afford losing three or four non-conference games. It would be a major impact for the Group of Five schools too.”

Several ADs suggested in the two-semester model that the College Football Playoff games could lead up to college basketball’s NCAA Tournament in March. They also recognize how important it would be for basketball’s March Madness not to conflict with college football.

“A split season would not be ideal, and we would probably be sacrificing some bowls, but we could get the College Football Playoff in,” a Power Five AD said.

How would coaches and players deal with a break in the middle of the season, and how long would the break last? Well, it depends on who you ask.

“Christmas is on Friday, so take that entire week off and Saturday [the 26th], and then get the season done after that,” a Group of Five AD said.

Added a Power Five AD: “The academic faculty will never tolerate less than a two- or three-week [holiday] break.”

An eight- or nine-game conference schedule, or a 12-game season?

Although this would be the trickiest option to pull off, 20 percent of the athletic directors believe a conference-only schedule in the fall could be played, starting in October or November.

Last month, Big 12 commissioner Bob Bowlsby said that any decisions on the number of conference games played in this scenario would be agreed upon by all the Power Five leagues.

Then there are the seven independents to consider — most notably Notre Dame.

The Fighting Irish would probably be included as an ACC opponent to get their eight or nine games in this scenario, but several Power Five and Group of Five athletic directors wondered how buyouts would be interpreted by schools involved with canceled non-conference games, specifically the independents?

Would an independent program be compensated if a school from one of the 10 FBS conferences canceled their matchup to add a game against another conference member on that same date? Would those schools seek the monetary penalties as stated in the game contracts or would rescheduling games in subsequent years be acceptable?

Also, contracts usually allow the canceling of games without penalty for extreme weather-related issues or an “Act of God,” but I’m guessing there aren’t many game contracts with language regarding a worldwide pandemic.

If the television networks have any influence on the schedules, they would clearly prefer a 12-game season in the spring over a nine-game conference-only schedule in the fall, an industry source said.

“It has to be a 12-game schedule,” a Group of Five AD said. “Power Five coaches and teams need the wins and games to make up the revenues in television, tickets, donations and sponsorships, and Group of Five schools need the [big-money] guarantee [road] games.”

“The better question might have been, what isn’t being considered,” Thompson said. “It’s amazing. We’re talking about a [possible] Labor Day start, conversations about [an] October [start], conversations about spring football in 2021, which would coincide with basketball and other sports.

“Then you get into facilities, logistics of can you play a football game in March in Colorado? Those types of conversations, and then lastly, how does all that blend into the academic calendar?”

The cancellation of the NCAA men’s basketball tournament and impact of COVID-19 already has seen some programs take some extreme financial measures.

A Group of Five athletic director said as much as he hates to admit it, he predicts that men’s soccer and wrestling programs will soon be on the “extinct list.” And it could get even worse without a football season.

One Power Five AD revealed his athletic program could lose up to $50 million in revenue, while USA Today estimated Power Five public universities would lose an average of $78 million without football being played.

“No one has a clue what will happen,” said another Power Five AD. “But students are our No. 1 priority, and they will be the only group not getting cut. No sports will be eliminated [here]. Beyond that, all options are on the table to deal with the revenue shortfall.”

“I’m not thinking of eliminating some of my Olympic sports,” a Group of Five AD said, “but I’m definitely thinking about suspending seasons. If football revenue is drastically cut, it may be inevitable.”

Another Group of Five AD had a much bleaker outlook.

“The Power Five budgets are larger and much more fragile [and] dependent on its conference television deal,” the AD said. “It’s a ‘house of cards’-type setup. But the Group of Five’s [budget] is front-loaded, backed by institutional support such as student fees and enrollment. The Group of Five knows the cuts are already here, and we can’t stop it.

“The Power Fives have only one play, and that’s to make sure football happens at ALL costs or it is doomsday! As long as football happens in some way, the Power Five schools have hope. There is no hope for Group of Fives because enrollment is affected, thus the cuts are already here.”

No matter when the season starts, the athletic directors are all in agreement on one thing.

“We must play football, or college athletics will shrink before our eyes,” a Power Five AD said. “The reality is, no matter what we end up with, there will not be a perfect solution.”