San Diego State senior forward Monique Terry was running errands with her mother, Elizabeth, on Saturday afternoon in Sacramento, California. Her mom’s cell phone wouldn’t stop buzzing. A bunch of her friends were concerned about whether her family was safe.

“Why wouldn’t they be?” she wondered.

Elizabeth would quickly learn about the mass shooting that had just occurred in her hometown of El Paso, Texas – the one in which 21-year-old Patrick Crusius walked into a Walmart with a high-powered rifle and claimed the lives of 22 innocent victims.

Elizabeth texted her sister-in-law. She then called her father in El Paso and got terrifying news: Monique’s first cousin, 24-year-old Jordan Anchondo, was at the Walmart at the time of the shooting shopping for school supplies and party decorations.

“We stopped our errands and went home with my dad and watched CNN,” Monique said.

They hung on every word, praying that Anchondo and her family would call or text a loved one to confirm she was safe. Instead, a little more than an hour later, they received the dreaded call that Anchondo was, in fact, one of the victims.

The next day, they received official confirmation that Jordan’s husband, 23-year-old Andre Anchondo, was also one of the 22 who were killed. Their two-month-old son Paul survived in large part due to his parents, who shielded him from the gunman’s bullets. Andre put himself in-between the shooter and his family while Jordan protected her son from the gunfire by covering him with her own body.

According to her sister, Leta Jamrowski, Jordan was holding the baby in her arms when she died. She fell on him as she collapsed onto the floor, breaking two of Paul’s fingers.

“He lived because she gave her life,” Jamrowski told the Associated Press.

“We never expected us as a family to be the headline of a massacre, of an incident like this,” Monique said. “When you hear and watch these incidents on TV, you just don’t ever expect it to happen to your family.”

And now the three children of Jordan and Andre Anchondo – 5-year-old Skylin, 2-year-old Victoria and 2-month-old Paul – will grow up without their parents.

“I don’t have any political stance, but I just know that this wasn’t right and it could have been avoided,” Monique said. “What she did for Paul, in saving his life, speaks volumes for who she was. She’d do anything for her children. She was such a caring person, her laugh was so contagious.” 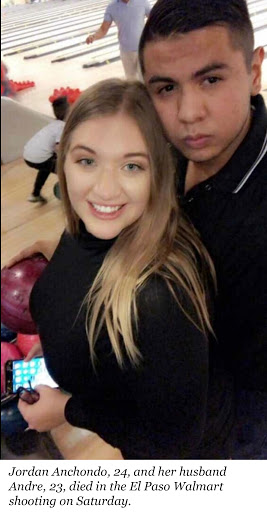 “Jordan was all about peace,” she added. “She always treated people the way she wanted to be treated. Gun violence shouldn’t be something that takes away a family member like this.”

Monique was born and raised in San Antonio, but would spend Christmas and other holidays with Jordan and her family in El Paso. Jordan, named because of her father’s love of former NBA star Michael Jordan, was closer in age to Monique’s older brother, Michael. Monique vividly recalls all of them playing outside on the trampoline, jumping up and down with eggs in their hands to see which one cracked first.

“No one ever won,” she laughed. “We’d all end up in the middle with our eggs cracked.”

In recent years, Jordan and her family would make the four-hour drive from El Paso to New Mexico to watch Monique when the San Diego State women’s basketball team played the Lobos.

Monique is still trying to come to grips with the fact that her cousin won’t see her play on Feb. 12 in Albuquerque, that this attack forever changed her family, and that three young kids will grow up without their parents. Monique’s mother, Elizabeth, created a Gofundme page for the three children that has already raised more than $20,000.

Monique honored her late aunt by changing her number from 40 to 4 this past season, and she will do something to honor her cousin during her final season at San Diego State. But she doesn’t know what it will be – it’s too early for her to come up with a tribute that will honor Jordan in the right manner.

“I haven’t really thought about it yet, but I’ll do something,” she said. “We’re still dealing with the family and how we’re going to get through it all.”

Monique, who had recently returned home to Sacramento after finishing summer classes, will remain in El Paso with her family for the funeral and provide support to the three children.

“We’re still in shock,” Monique added. “We’re just all trying to comfort the kids and be there for them. The kids are too young; they just don’t understand what happened.”