This is the second in Stadium’s “Conference Chain of Command” series in which we polled a handful of veteran coaches in every league to determine the best JOBS in each league, all the way down to the ones that are the most difficult.

This is how polling in the American Athletic Conference shook out among coaches who voted, with one being the best and 12 being the worst: 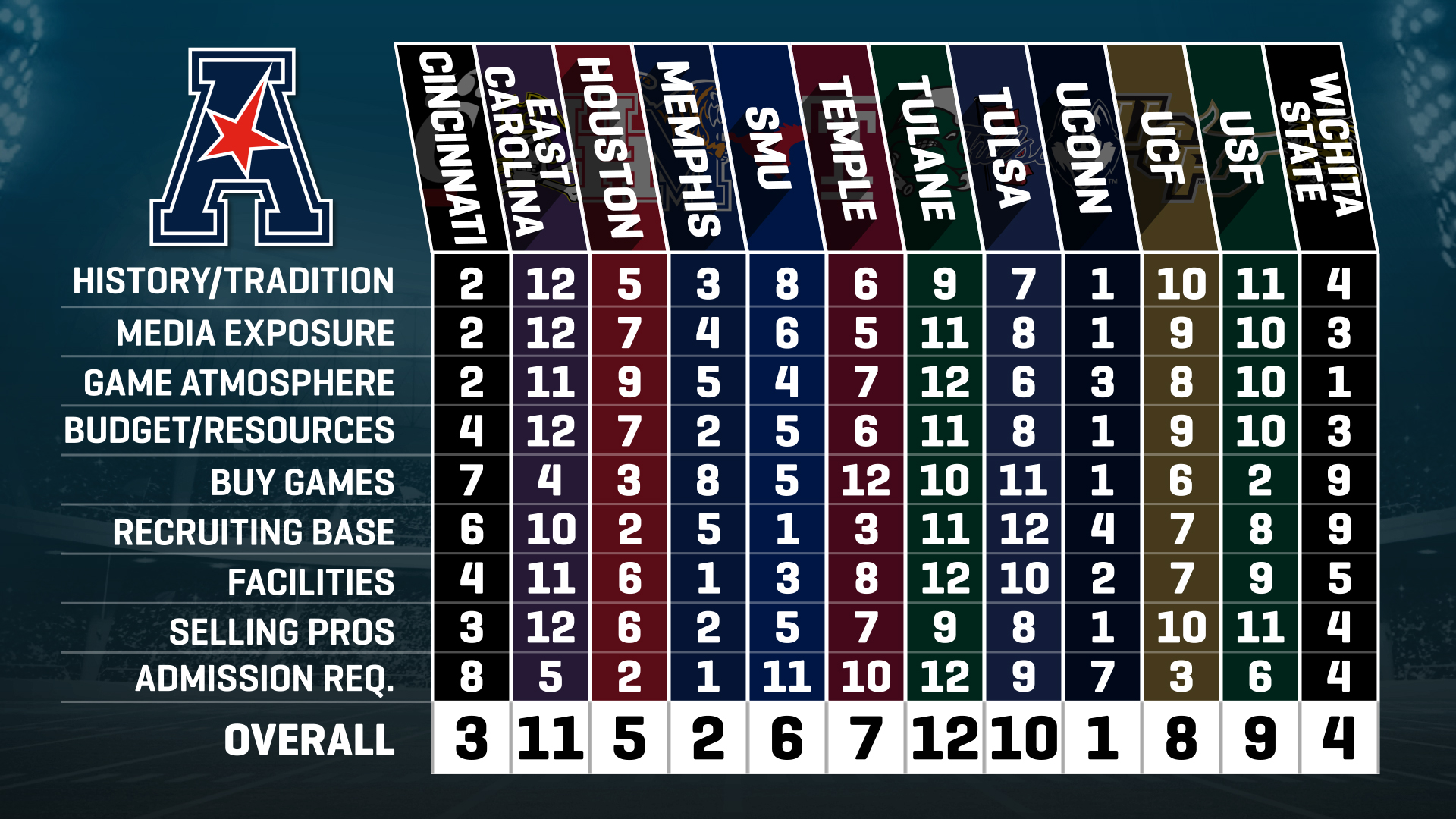 1. UConn (96) – The Huskies have won national titles in 1999, 2004, 2011 and 2014, they have had a seemingly endless supply of NBA guys come through Gampel Pavilion, and the program ranks in the top four of the league in eight of the nine categories.

Where they win: Sure, the tradition the last four years has taken a hit, but it’s still UConn. Four national titles in the last two decades. No other program can say that. That gets them in the door with just about any top-100 recruit.

The knock: “Storrs, Connecticut. Have you ever been? It’s in the middle of nowhere. Makes it a little more difficult to close the deal with recruits.” – AAC head coach

2. Memphis (86) – Great facilities, you have a good chance to land any kid from the city of Memphis, you can get just about anyone into school, and the fan base is rabid – when you are winning. Memphis ranks in the top five in the league in everything except spending money on buy games.

Where they win: “Kids from Memphis don’t leave Memphis. There’s just nowhere else where a program has this type of pull on the local kids.” – AAC assistant coach

The knock: Unrealistic expectations from the fan base. Just getting to the NCAA Tournament isn’t enough. Ask Josh Pastner.

3. Cincinnati (79) – Mick Cronin has taken the Bearcats to eight straight NCAA Tournaments. This is a program with history and tradition, winning national titles in 1961 and 1962 and also making four other Final Four appearances. It’s a brand, and the atmosphere is among the best in the league.

Where they win: The commitment to the program is strong. They have the tradition and resources and are located in a fertile recruiting ground with plenty of players within a drive.

4. Wichita State (75) – They have the best game atmosphere in the AAC, and the resources aren’t far behind UConn and Memphis. Gregg Marshall has taken the Shockers to six consecutive NCAA tourney appearances, including a Final Four in 2013. However, while it was clearly the elite program in the Missouri Valley; now it’s still got some work to do to catch up in the AAC.

Where they win: Incredible support, tremendous game-day atmosphere and it’s the only game in town.

The knock: “The recruiting base. Wichita is one of the worst cities in the league. They could go national when they were in the Missouri Valley, but they can’t do that and win the American.” – AAC assistant coach

5. Houston (70) – The program is best known for Phi Slamma Jama in the mid 1980s, and it hasn’t been nationally relevant much since that time. They’ve been to just two NCAA tournaments since 1992. But a huge renovation to the arena has helped, and so has the hire of Kelvin Sampson.

Where they win: “Elite practice facility, huge upgrade to the arena and a ton of players in the area – both high school and junior college.” – AAC assistant coach

The knock: Fan support has been lacking. The weather is nice, and there’s a lot of other things to do in Houston. The Astros and Rockets are playing well, and the Texans are still an NFL ticket.

6. SMU (69) – Mike Dement didn’t take the Mustangs to the NCAA tourney from 1996-2004, Jimmy Tubbs failed to do so in his brief tenure, Matt Doherty came up well short, and Larry Brown did it – but had his usual off-court NCAA issues. Tim Jankovich took SMU to the tourney two years ago and has plenty to work with, including the best recruiting base of anyone in the league.

Where they win: Tremendous recruiting base, beautiful campus, very good facilities and when they are rolling, the stars come out to watch.

The knock: “There’s just so much else going on in Dallas, it’s tough for them to get people in the arena if they aren’t winning.” – AAC assistant coach

7. Temple (53) – The program has a strong tradition dating back to the 1950s when the Owls made a couple of Final Four appearances. John Chaney went to 17 NCAA Tournaments in 24 years as the head coach, and current coach Fran Dunphy — who will step down after next season — has gone to seven tourneys in 12 years (but only one in the last five years since joining the AAC).

Where they win: “They are solid in every single way. They don’t blow you away in anything, but aren’t towards the bottom of the league in anything, either.” – Administrator

The knock: It’s not quite as easy as it used to be to get kids into school, and it’s also an urban campus – which is a selling point for some, but not for others.

Where they win: “I think it’s a gold mine. Massive student body, great campus and can recruit nationally because people want to go to Orlando.” – Administrator

The knock: They need a practice facility, and the resources aren’t up to par with the top half of the league. At least not yet.

9. USF (40) – South Florida has only three NCAA tourney appearances on its resume, with two of them coming courtesy of Bobby Paschal (1990, 1992) and one from Stan Heath while the program was in the Big East in 2012. Seth Greenberg came up empty in seven years, Robert McCullum couldn’t do it in his four years in Tampa and the Orlando Antigua Era was forgettable. They are towards the bottom in just about every category.

Where they win: “It’s a potential gold mine. Great city in Tampa, big budget coming from the Big East and you can throw a rock and hit a ton of 6-foot-7, long-armed dudes.” – AAC coach

The knock: No tradition, campus is considered mediocre by league standards and football overshadows the hoops program.

Where they win: Beautiful campus, nice practice facility and it’s the only show in town. Also tradition with guys like Nolan Richardson, Bill Self, Tubby Smith and Danny Manning all succeeding.

11. ECU (28) – No one has been able to get it going at ECU, from Tom Quinn in the 1960’s and 1970’s while the program was in the SoCon to Dave Odom, Charlie Harrison, Mike Steele, Joe Dooley and Bill Herrion when the program was in the CAA and C-USA. Jeff Lebo came up short. There are only two NCAA tourney appearances (1972, 1993), and now Dooley gets another shot — and it won’t be easy with bottom-of-the-league resources and tradition.

Where they win: “This is a tough one, but I guess it’s a positive that you are in a hoops-crazed state. You aren’t far from Raleigh or even Charlotte.” – AAC head coach

The knock: Not enough resources, a tough location to get to, and there are a bunch of programs in the state that have more pop than ECU.

12. Tulane (20) – Twenty-two years without an NCAA Tournament appearance. The only time the program has been truly relevant was under Perry Clark in the 1990s when the Green Wave went to the NCAA tourney three times (1992, ’93 and ’95), and also for the point shaving scandal in the 1980s involving John “Hot Rod” Williams. Tulane can sell academics and New Orleans, but has no real tradition and poor resources and facilities.

Where they win: There’s only one big-time school in the state, LSU, which means they should have a chance to get a bunch of quality home-grown kids. It’s a great city and place to visit, and they also can sell the academics to some.

The knock: “There are a ton of big-time athletes in the state, but most of them can’t get into Tulane. Also have less resources than just about everyone except for ECU.” – AAC coach