In Week 10’s SEC East showdown between Georgia and Florida in Jacksonville, Florida Head Coach Dan Mullen called two timeouts on the Gators’ opening drive — one with 13:13 left in the first quarter and another with 11:42 remaining. You’d be hard-pressed to find a team, especially one with the ranking and aspirations of the Gators, that takes two early timeouts in quick succession like that this season.

In fact, the rest of the top 10 teams in the country, according to the College Football Playoff selection committee’s first rankings of the season, have combined to take just three timeouts earlier in the game than when Mullen called his second timeout against the Bulldogs.

It got us wondering: Which of the country’s top coaches take the most timeouts? In which situations do they call timeout? And how productive are their teams coming out of a timeout?

Here are the coaches of the top 10 teams in the country, listed in descending order of how many timeouts they’ve called this season.

A few quick takeaways: We’ve seen how a coach’s background — meaning an offensive background vs. a defensive one — can impact his aggressiveness on going for it on fourth down, and it can also affect which side of the ball your team’s head coach tends to use his timeouts.

Six of the 10 head coaches have had a balanced timeout usage this season, meaning there’s no more than a three-timeout disparity between how many they’ve called on offense versus defense.

Penn State’s James Franklin has used two-thirds of the 15 timeouts he’s called this season on offense.

The one exception among these 10 head coaches, however, is Utah’s Kyle Whittingham, a former linebacker whose resume is filled with defensive assistant and coordinator roles. He has called 13 timeouts when the Utes have been on offense this season, compared to eight when they’re on defense.

If you had to guess when head coaches typically use their timeouts, you’d probably answer that they save them for the end of a half, especially late in the second and fourth quarters if they’re trying to manage the clock to get their offense one more possession or if they’re trying to ice the opposing team’s kicker.

Your guess would be accurate.

Of the 200 timeouts analyzed — we swear we had no intention of getting a sample size of such a round number — 106 were taken in the second quarter and 51 were used in the fourth quarter.

Here’s a visual breakdown of when coaches of the College Football Playoff selection committee’s top 10 teams have called timeout this season, based on the quarter and time elapsed in the game. 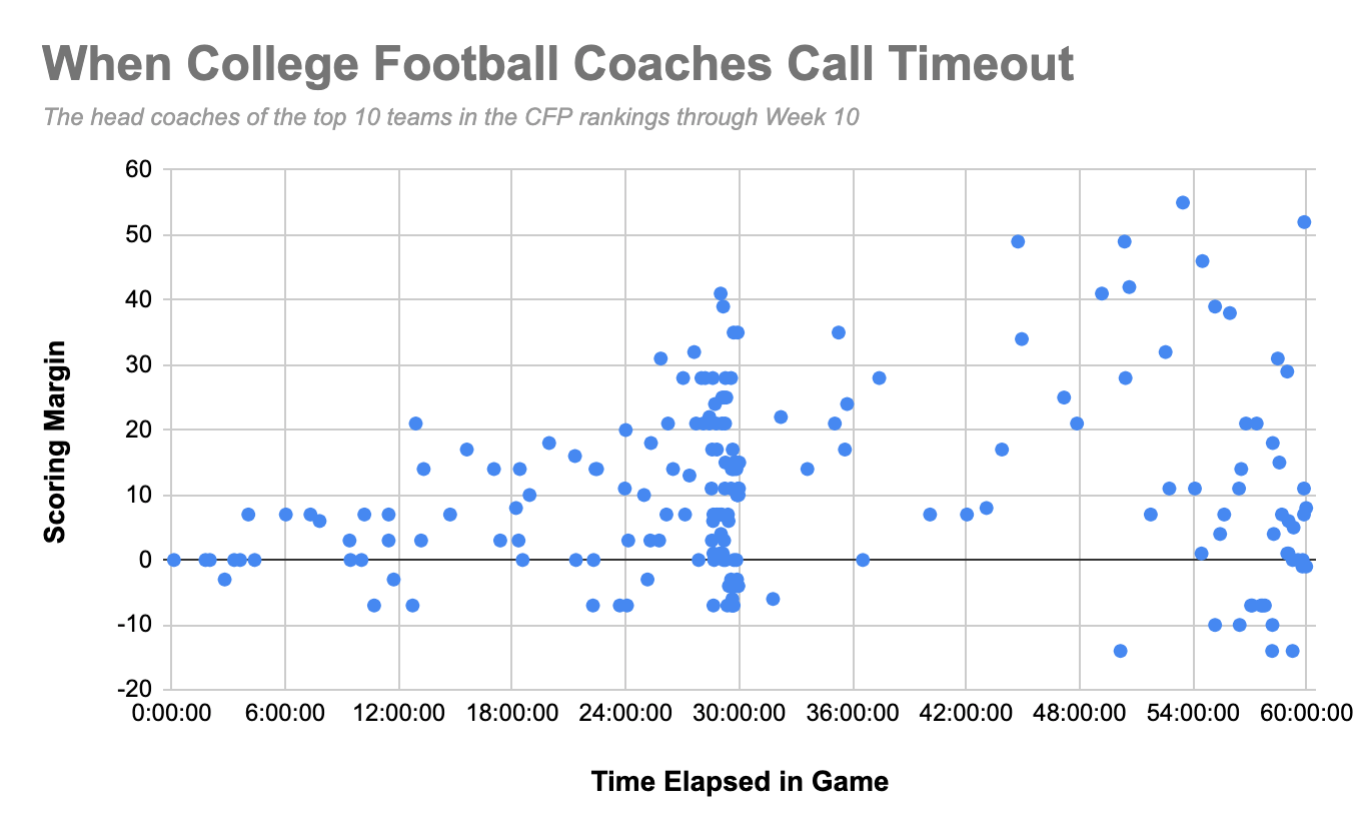 As you can see in the graph above, there are few gaps between dots late in the second and fourth quarters, meaning that’s where the highest concentration of timeouts are called. It shouldn’t be a surprise that few timeouts, at least on a percentage basis, are called early in a quarter, especially in the first and fourth quarters.

The following table shows when the 10 coaches examined have used their timeouts this season.

Clemson’s Dabo Swinney and Alabama’s Nick Saban are the most extreme in their usage by quarter in that both coaches have exclusively used their timeouts in the second and fourth quarters this season.

Penn State’s James Franklin has also not used any timeouts in the third quarter.

During our data analysis, we wondered: what happens on the play immediately following a timeout?

Well, it turns out that roughly a quarter of the time it’s some kind of kick.

Fifty-three of the 200 timeouts immediately preceded a punt or field goal attempt.

Penn State, Georgia, Oklahoma and Florida have each taken seven timeouts this season right before a punt or field goal attempt, which means that almost half of Penn State’s 15 timeouts have been used before a kicking situation.

Within this pre-kick category of timeout, the most common situation is when a team is on defense, just got a stop on third down and the opponent is about to punt. These are often situations in which the team on defense is trying to stop the clock because it knows it’s about to get the ball back and it wants to give its offense as much time as possible to try to put together a scoring drive.

One of the more incredible stats we discovered is that of the eight timeouts Ohio State has called this season when the Buckeyes were on defense, three of them led to a turnover on the next play — a pick-six against Indiana, an interception late in the first quarter against Nebraska and a strip sack by Chase Young on Wisconsin quarterback Jack Coan, following a false start penalty against the Badgers.

That’s a pretty incredible — and unsustainable — success rate on timeouts taken on defense.

Likewise, the Buckeyes have a really high success rate on offense on the plays immediately following a timeout in which they called.

Six of the 10 teams examined have scored a touchdown on a play immediately following an offensive timeout this season, led by Ohio State with three on seven opportunities, when ignoring plays in which the team on offense punted or attempted a field goal on the next play.

Not every play is going to be a 60-yard touchdown run on 2nd & 9, like Ohio State running back J.K. Dobbins pulled off against Cincinnati after the Buckeyes called a timeout in the middle of the second quarter.

A better measuring stick of the effectiveness of a timeout — at least in a one-play analysis — is what percentage of the time an offense picked up a first down (or scored a touchdown) on the next play after it called timeout, and conversely, how often a defense prevented the opposing offense from picking up a first down or scoring a touchdown.

Here are how the 10 teams we examined stack up in that regard. Plays in which the team on offense punted or attempted a field goal on the first play after a timeout were not included in the percentages.

Game management, which certainly includes how often and in what situations a head coach uses his timeouts, is one of the biggest complaints you’ll hear fans mention after their team loses a big game or gets upset.

Well, here’s some objective data that can be used to support, or dismiss, the raw emotions after a frustrating loss.

MORE: This Is How Much It Costs to Land One of College Football’s Top Recruiting Classes