College basketball coaches will hit the recruiting trail on Friday for the start of a six-day recruiting period in which they’re allowed to evaluate prospects and make in-person, off-campus contact with recruits.

The final day of the official NCAA “recruiting period” for the 2018-19 recruiting calendar is Thursday, May 2, which means the next two-plus weeks are critical for coaches as they put the finishing touches on their 2019 recruiting classes and continue building their rosters for 2020 and beyond.

In light of a 2019 Final Four, in which just 16 former top-100 recruits played in Minneapolis, it’s fair to wonder how strong the correlation is between success on the recruiting trail, at least in the eyes of recruiting services who assign star ratings to prospects, and winning.

Using the data available from the 247Sports Composite rankings, which take into account all of the major recruiting services, we compared the win totals for every program in one of college basketball’s top seven conferences – the AAC, ACC, Big 12, Big East, Big Ten, Pac-12 and SEC – plus other notable programs like Gonzaga, Nevada, Buffalo and VCU, among others, over the course of the last four seasons to determine each school’s average recruiting class ranking during that time span. In total, 104 schools were examined.

The goal was to measure recruiting efficiency, which would help answer the following questions.

Duke and Kentucky have landed the top two recruiting classes, in some order, for each of the last five seasons. Their average national recruiting class rankings in the last four seasons are a minuscule 1.25 and 1.75, respectively. The next best is Arizona at 9.25.

[RELATED: These Are Reasonable Expectations When Your School Lands a Top-10 Recruit]

The Blue Devils and Wildcats have won at an extremely high level since the start of the 2016 season, but there are other programs that have won at a higher level – in the regular season and the NCAA Tournament – with inferior talent from a recruiting rankings perspective. 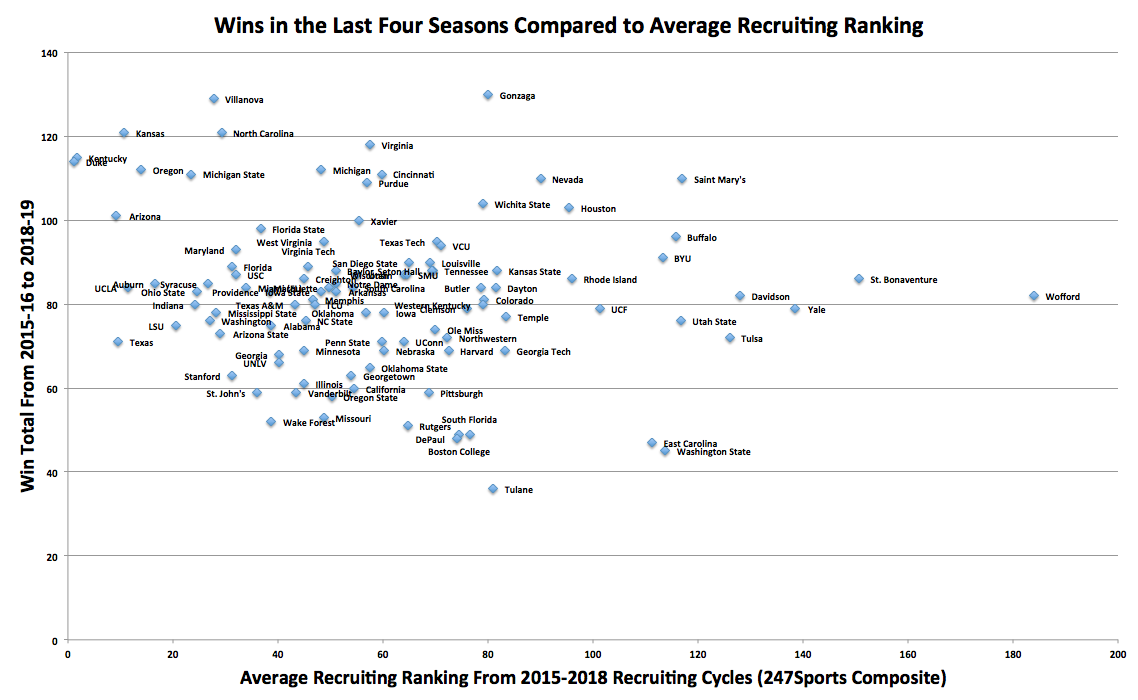 In the last four recruiting cycles, only seven schools landed a top-25 class every year, according to the 247Sports Composite rankings. They are Duke, Kentucky, Arizona, Texas, Kansas, UCLA and Oregon.

As referenced earlier, Duke and Kentucky are in a tier of their own when it comes to recruiting.

To add further context to the graph above, we added a trend line, which shows the average win totals based on the average recruiting class rankings in the last four seasons of the 104 schools examined. 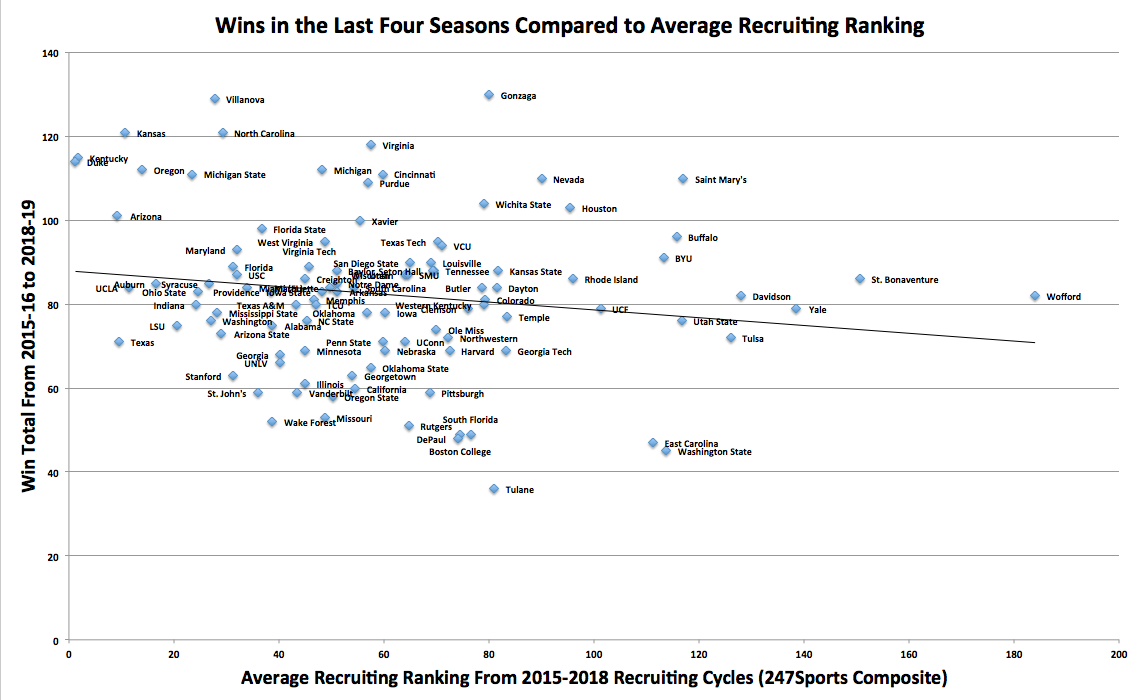 To simplify the trend line concept, a team that falls above the trend line has maximized the talent it has enrolled more so than the average power conference program or top-level mid-major in the last four years.

Teams that fall below the trend line have underperformed with the talent they’ve enrolled in the last four seasons based on the averages of their peers.

Given that the bulk of power conference teams have had an average recruiting class ranking between 30 and 80, and have won between 60 and 90 games in the last four seasons, here’s a closer look at that group of teams. 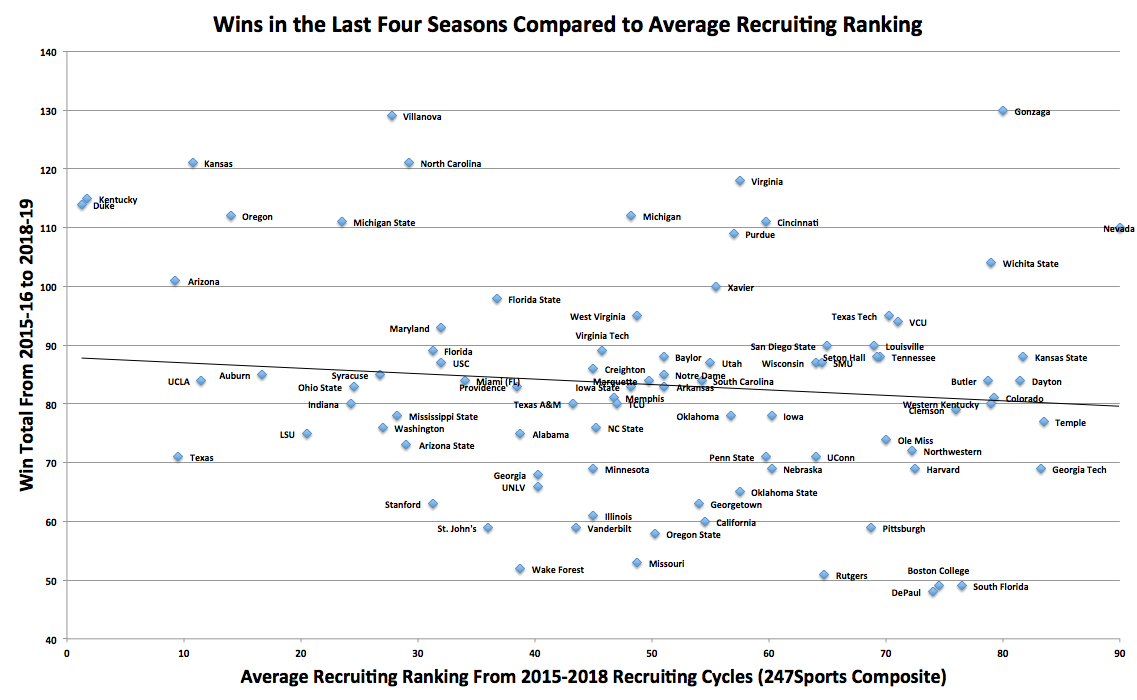 Of course, this concept isn’t perfect. It doesn’t take into account transfers (inbound or outbound), early NBA Draft departures, coaching changes or veteran-laden teams in the 2016 and ’17 seasons that may have benefited from recruits from the 2012 and ’13 recruiting classes.

But at the very least, it provides a surface-level lens of how much college basketball’s best programs have won recently in regard to the level of recruits they’ve enrolled. It also shows that while Duke and Kentucky have won at a high level while annually enrolling the two best recruiting classes in the country, Texas and UCLA have been relatively disappointing given their nationally elite recruiting efforts.

Villanova, North Carolina and Virginia have won national championships with three and four-year players, with the former and latter making use of redshirt seasons and tapping into the transfer market.

Speaking of transfers, Gonzaga and Nevada have had two of the best winning percentages in the country over the last four seasons while relying heavily on transfers.

In an attempt to quantify which schools have maximized their recruiting efforts in terms of wins, using the trend line that is based upon the average recruiting class rankings in the last four years of the schools examined, we measured the distance between a school’s data point and the trend line.

The larger the distance between a data point and the trend line, at least in a positive direction, the more a school maximized the talent of its recruits.

The top five schools are listed below, followed by the distance between their data points and the trend line.

They’ve won at a nationally elite level while many of the high school recruits they’ve enrolled were three- or mid-to-low-level four-star recruits. On the other hand, Gonzaga is also a program that’s benefited significantly from transfers like Brandon Clarke, Nigel Williams-Goss, Kyle Wiltjer, Johnathan Williams, Jordan Mathews and Geno Crandall in recent years, so its roster has been more talented than recruiting rankings alone would suggest.

Sure, Gonzaga’s win total is also slightly inflated based upon their West Coast Conference competition but the ‘Zags have advanced to the national championship game, the Elite Eight and the Sweet 16 (twice) in the last four seasons, so they have absolutely earned their place among the college basketball programs that are currently operating at the highest level in the country.

To be more democratic and to weigh NCAA Tournament success more heavily, we graphed the same 104 college basketball programs over the last four seasons, but this time we compared each school’s average recruiting class ranking to the number of NCAA Tournament games they’ve played in the last four years.

However, we did count First Four games for the losing team to acknowledge their participation in the tournament. 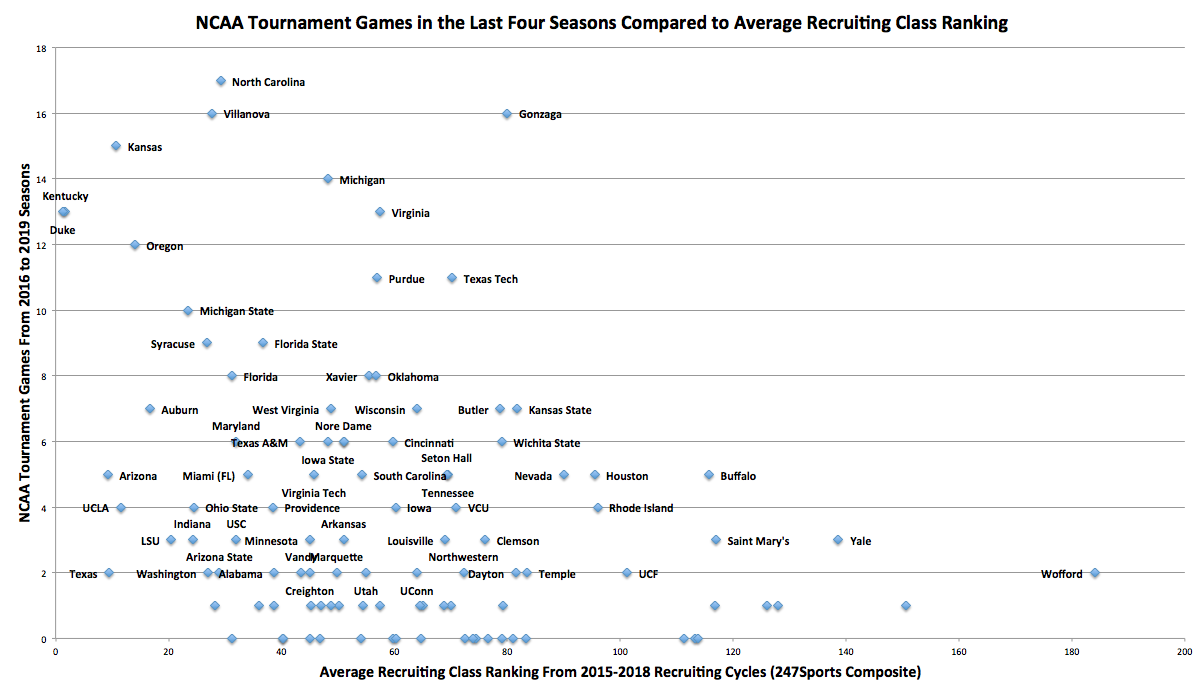 Once again, we added a trend line to show how teams’ NCAA Tournament participation and advancement has compared to the “average” performance in the last four years for power conference and top mid-major teams. 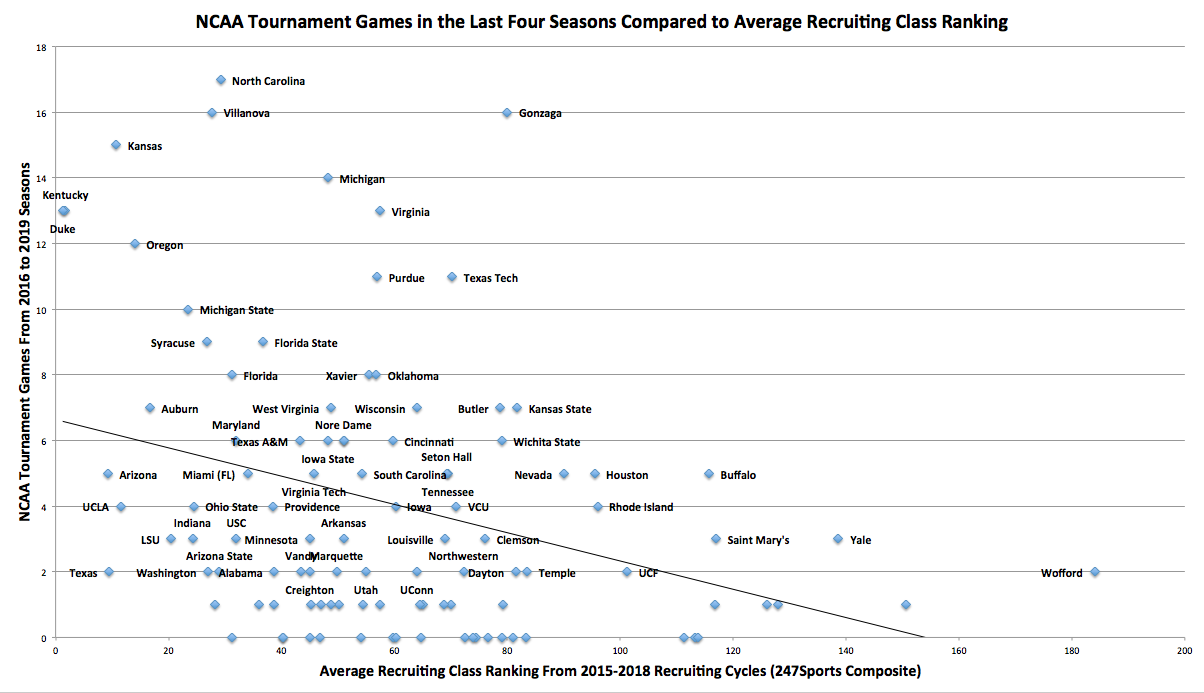 Here’s a look at the schools examined that have won at least 100 games in the last four seasons and how their last four recruiting classes ranked nationally.

So it’s not as if consistently landing top high school talent is a bad thing.

But the roster makeup of last season’s Final Four teams and recent national champions, combined with the possibility that the NBPA lowers its age minimum to 18 by the 2022 NBA Draft suggest there’s value in recruiting players who will be in school for two, three or four years, even if they need to redshirt their freshman year or even if they started their college career at another school and are looking for a new home.

Virginia, Villanova and Gonzaga are proof of that.