That group is largely a who’s who of many of the best college football programs this decade — one that has combined for 15 of the 20 College Football Playoff appearances during the playoff era.

It shouldn’t be a surprise that with the exception of Wisconsin, those programs have recruited at a nationally elite level. From 2015 to 2018, Alabama had an average national recruiting class ranking of 2.0, according to the 247Sports Composite rankings, thanks to three consecutive top-ranked classes.

Ohio State (3.8) and Georgia (4.0) also had an average ranking inside the top five, while the average recruiting classes at Clemson (10.8) and Oklahoma (12.8) ranked just outside the top 10 in the country.

Here’s a scatter plot of the relationship between wins in the last four seasons and the average recruiting class ranking from 2015-18 for every Power Five college football program, plus Notre Dame.

The win totals are not adjusted for NCAA violations. 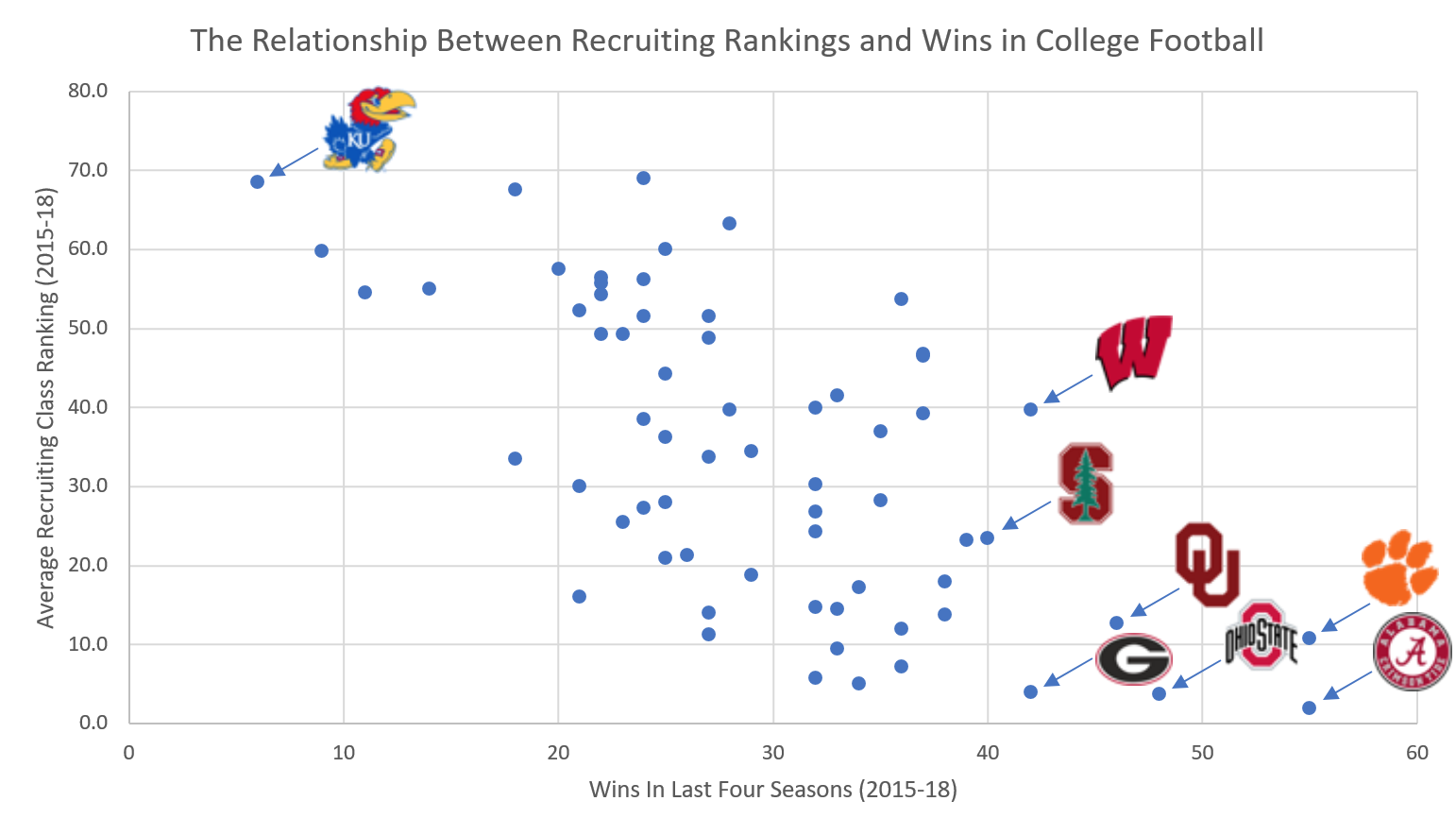 It’s fair to say this recruiting-to-win-total relationship is stronger in football than it is in men’s basketball, where many programs have won at a high level in recent seasons thanks to veteran cores rather than one-and-done talent, transfers and players who redshirted.

But like college basketball, there’s no shortage of programs that have over and underachieved on the field based upon their annual recruiting class rankings in relation to the rest of the Power Five schools.

With an average recruiting class ranking of 39.8 from 2015-18, Wisconsin is certainly an overachiever.

Across their four recruiting classes from 2015 to 2018, the Badgers signed a combined seven 4-star prospects and zero 5-star prospects, building their roster around 3-star recruits.

Instead, Wisconsin won 42 games in the last four years, including a 13-1 season in 2017 and a pair of Big Ten West titles.

Programs above the line have overachieved on the field based on the talent they’ve enrolled, compared to the rest of the Power Five schools, while schools below the line have underachieved.

Schools on the line or very close to it have generally met expectations in terms of their win totals compared to their Power Five peers.

The scatter plot below shows some schools that have overachieved the most, relative to the rest of the Power Five. 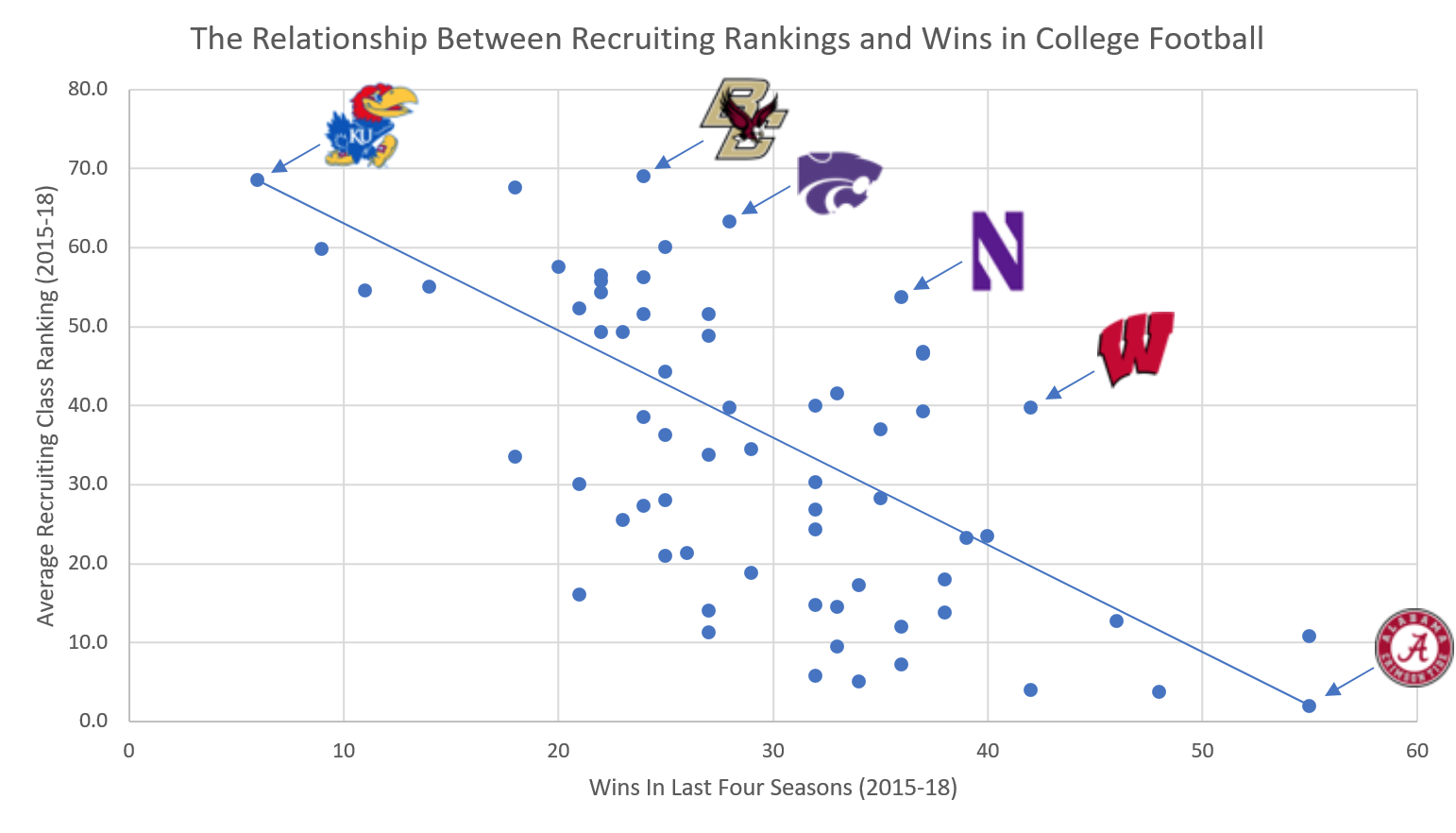 The scatter plot below shows several notable schools that have recruited at a high level, but have failed to win at the level you would expect for a program that enrolls classes that rank in the top 10 to 20.

It’s worth noting that UCLA and Texas fall in a similar category in both football and men’s basketball as schools that recruit at a high level, but have struggled in recent years to win at a level that’s commensurate with their recruiting rankings. 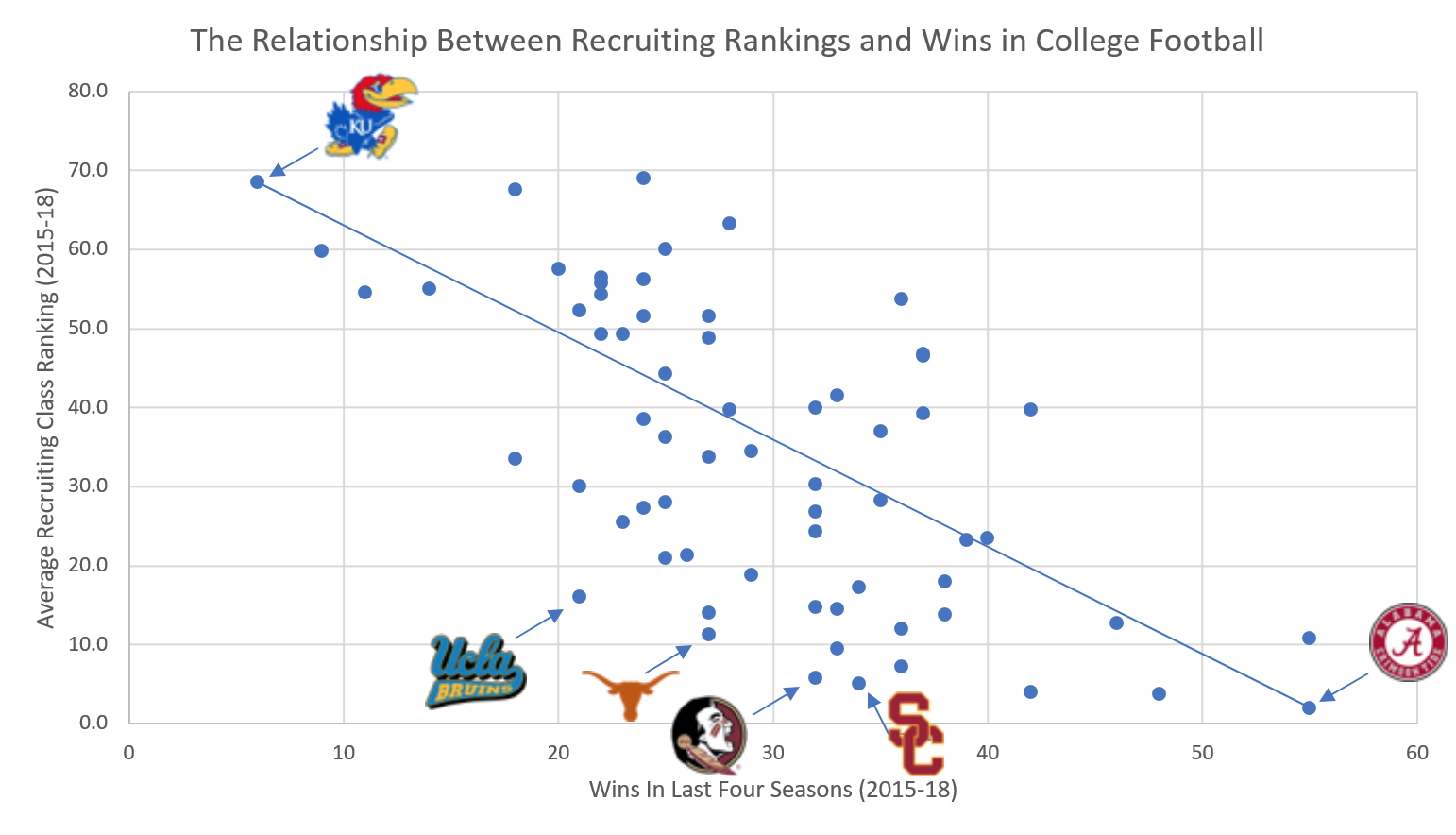 Below is a conference-by-conference breakdown for each school’s win total and average recruiting class ranking from 2015 to 2018. They’re listed in descending order of wins.

The last column, labeled “Difference,” shows the difference between where a school ranks in its conference in win total in the last four seasons compared to its average recruiting class ranking in the conference during that span.

MORE: Here’s What Power 5 Programs Have Accomplished Since 2020 Recruits Were Born