That year also marked the end of college football as we know it. It was the calm before the realignment storm.

Because in 2011, Nebraska did the Texas two-step from the Big 12 to the Big Ten, Big 12 member Colorado went west to the Pac-12 and Utah left the Mountain West for the Pac-12.

Among the non-Power conferences, it felt like dozens of schools were shuffling to different leagues by the second. TCU, Boise State and San Diego State even joined the Big East for a few days, before changing their minds and never playing a game in the conference.

And as we near a decade since those tectonic realignment plates shifted, let’s look at the institutions that rode college football’s realignment merry-go-round between the years of 2011 and 2014. 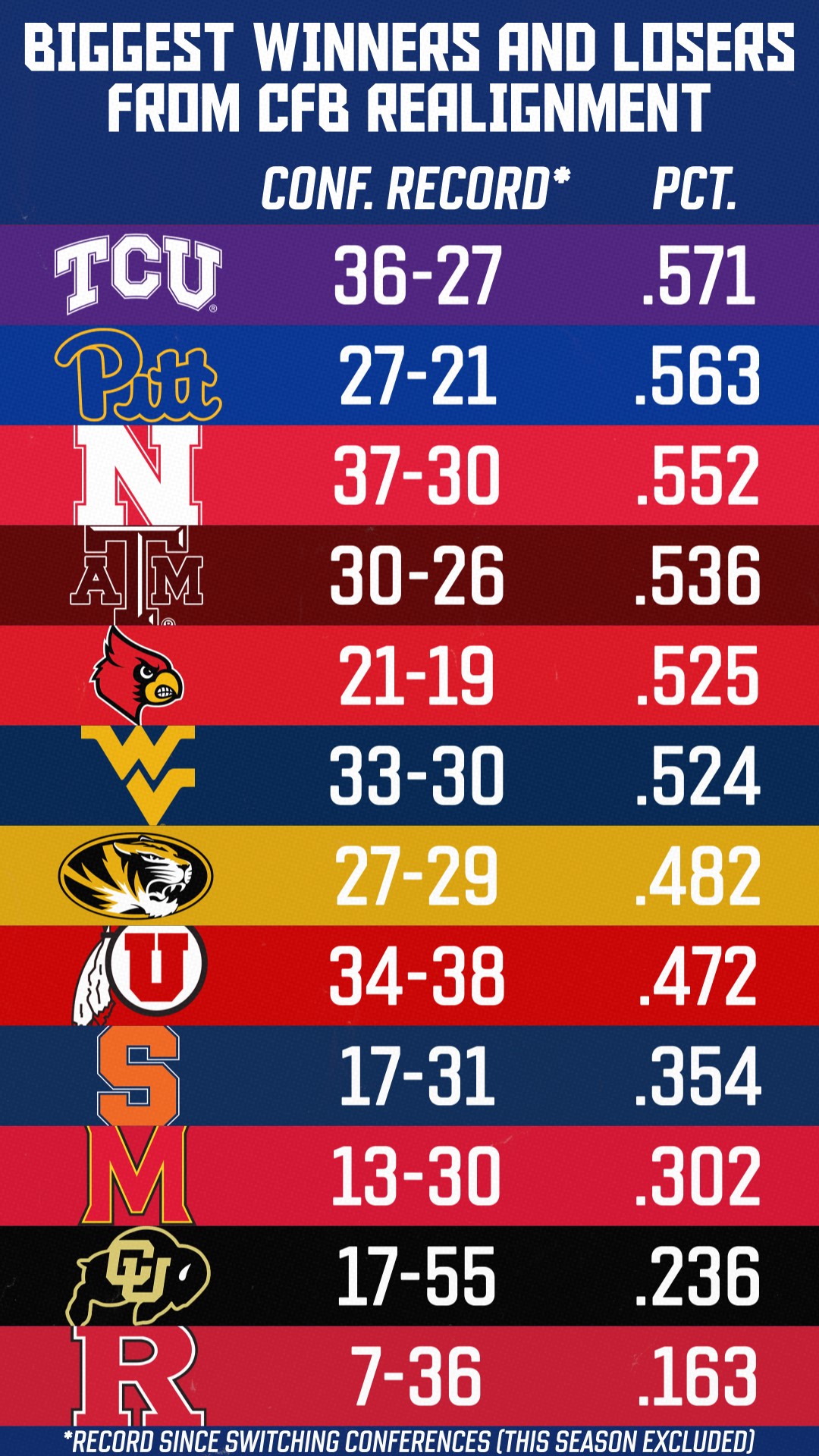 Now, let’s rank the 12 schools based on their conference winning percentage since they changed leagues:

The Big 12 is the only Power Five league without divisions, so while TCU doesn’t have any division titles, the Horned Frogs could have/should have made the inaugural 2014 College Football Playoff as Big 12 co-champions. Of the 12 realignment schools, only two still have the same head coach as before realignment: TCU (Gary Patterson) and Utah (Kyle Whittingham). Ironically, both moved up to the Power Five level from the Mountain West, although TCU made a very, very brief stop in the Big East. Of the dozen schools, TCU has the highest conference winning percentage (.571 percent) and is the only one that reached a New Year’s Six bowl. In the past five seasons, TCU’s 30-15 conference record is second among Big 12 schools.

Of the four schools on this list that escaped the Big East, Pitt has had the best winning percentage in its new conference. While the Panthers remarkably have never managed an undefeated non-conference record in the 29 years they’ve been in a conference, the Panthers are coming off their first ACC Coastal Division title. They have been very consistent in league play since joining the ACC in 2013. Of their six seasons in the ACC, only two were below .500 (3-5 in 2013 and 2017), with one .500 season and three seasons above .500. In the past four years, only Clemson (30) and Miami (21) have more ACC wins than Pitt (20).

After leaving the Big 12 for the Big Ten, the Cornhuskers went 12-4 in conference play in their first two Big Ten seasons, including a Legends Division title and Big Ten title game appearance in 2012. Nebraska’s 12-4 record was also the best among the realignment schools in the first two seasons in their new league. The Cornhuskers were 22-10 in league play in their first four seasons, compared to 15-20 in their last four seasons under Mike Riley and Scott Frost.

The Aggies are only fourth in conference winning percentage among the 12 schools — arguably playing in the nation’s toughest conference — but they are the only program that has gone to a bowl game every year since moving. Texas A&M is also one of two schools of the 12 with a Heisman Trophy winner since changing conferences (Johnny Manziel, 2012). Texas A&M has finished higher than fourth in the SEC West only twice in seven seasons.

I’d argue that Louisville — who gets to tout Lamar Jackson’s 2016 Heisman Trophy campaign — has experienced the biggest benefit of any of these schools for one simple reason: they were lucky enough to avoid Connecticut’s fate. UL and UConn were once the finalists for the last spot to join the ACC, and the ACC chose Louisville, which did wonders for the university’s entire athletics program. Meanwhile, UConn is leaving the American Athletic Conference for the Big East in all sports but football as that program ventures into the treacherous waters of trying to compete as an FBS independent.

Since leaving the Big East, the Mountaineers managed to rack up six bowl appearances in seven seasons under Dana Holgorsen. West Virginia, which won five of its last seven bowl games as members of the Big East (including a 70-33 victory against Clemson in the Orange Bowl), has struggled in bowl games since joining the Big 12, dropping five of six. The Mountaineers, however, are three games over .500 in Big 12 play.

Since joining the Pac-12 in 2011, the Utes are four games under .500 in conference play. However, they entered this year with five consecutive winning seasons overall and had won five straight bowl games until last year’s Holiday Bowl loss to Northwestern. Of the 12 realignment schools, Utah is the highest ranked in this week’s Associated Press poll at No. 10. Don’t forget that Utah was the media’s preseason pick to win the Pac-12 this season.

Since joining the ACC in 2013, Syracuse only has one winning record in ACC play — last year’s 6-2 mark under Dino Babers. Prior to 2018, the Orange was 11-29 (27.5 percent) with four consecutive seasons in ACC play where they won two or fewer league games. Syracuse also joins Pitt as the only current Power Five schools that have never had a perfect non-conference season within the last 29 years.

Of the 12 schools, Maryland has had the most head coaching changes. New coach Mike Locksley is the Terps’ fourth different head coach since Maryland joined the Big Ten in 2014. The Terps were 4-4 in their debut Big Ten season, but now have four consecutive losing seasons in league play. Since joining the Big Ten, the Terps have had twice as many coaches as bowl appearances (two) and are 17 games under .500 in league play.

If not for the Buffaloes’ magical season in 2016 — 8-1 in conference play, winning the Pac-12 South — Colorado would be neck-and-neck with Rutgers for dead last on this list. Other than 2016, Colorado hasn’t been competitive in the Pac-12. Excluding 2016, Colorado has never won more than two Pac-12 games in any season and is just 9-54 in Pac-12 play.

Hello, Rutgers! Big Ten Commissioner Jim Delany added Rutgers because of the New York TV market and… the New York TV market. The Scarlet Knights have seven Big Ten wins in the last five years, with Rutgers’ most successful year in the Big Ten coming during its 2014 debut (3-5). Since that season, Rutgers is 4-32 in league games, including this year’s 0-1 start.