Atlantic 10 Basketball Coaches Rank the Best Jobs in the Conference

This is the fifth in Stadium’s “Conference Chain of Command” series in which we polled a handful of veteran coaches in every league to determine the best JOBS in each league, all the way down to the ones that are the most difficult.

This is how polling in the A-10 shook out among coaches who voted, with one being the best and 14 being the worst: 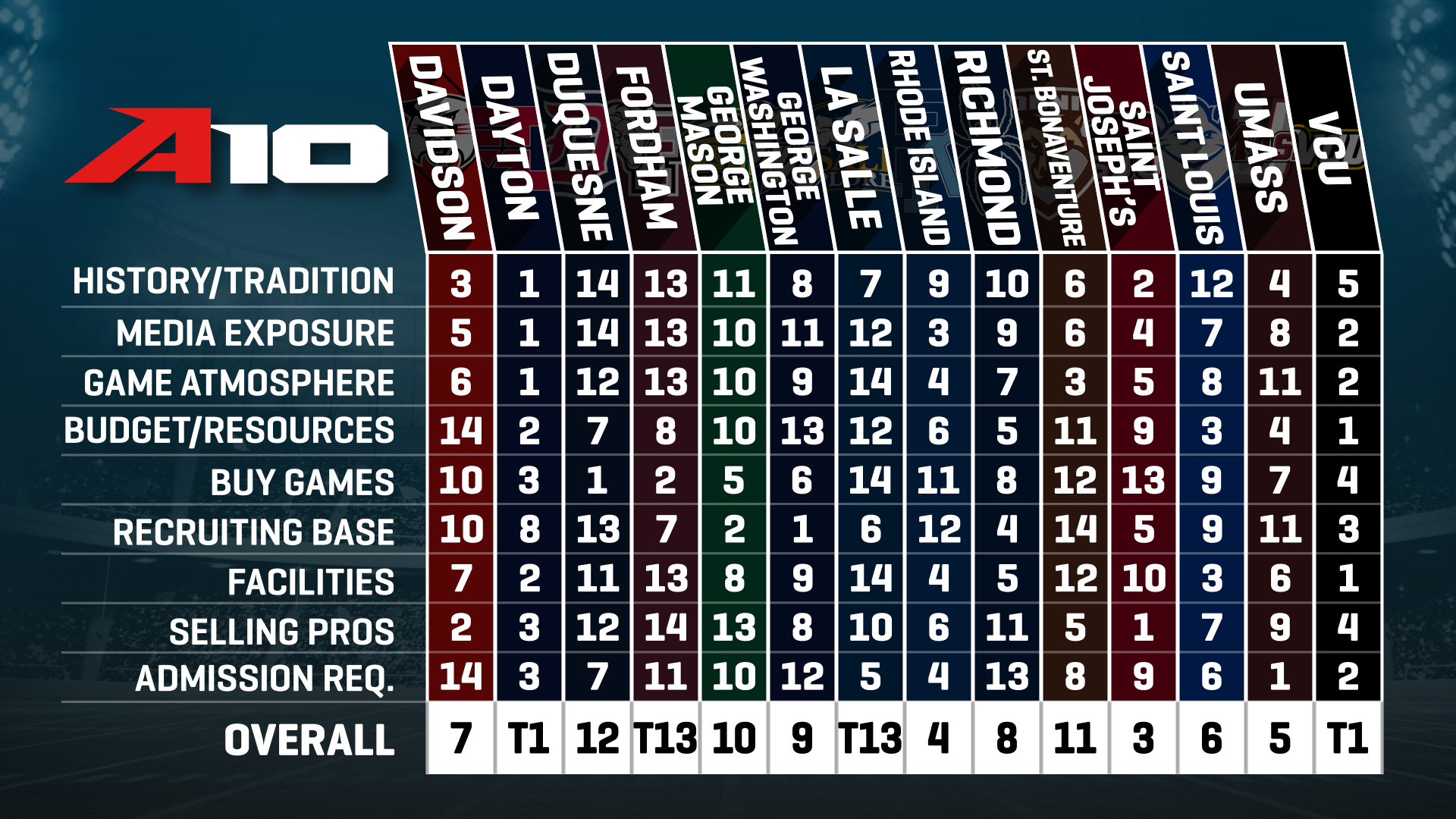 T1. Dayton (111) – Ranked first in tradition/history, media exposure and game atmosphere, and second in resources and facilities. Dayton went to four consecutive NCAA Tournaments under Archie Miller from 2014-17, and has an incredible fan base.

Where they win: The administration gets it at the highest and every level. The fans are passionate, loyal and an understanding fan base. The arena will be phenomenal when the renovations are done.” – A-10 assistant

The knock: “The weather. The sun doesn’t shine from November through March. It’s depressing.” – A-10 assistant

T1. VCU (111) – The Rams went to the Final Four under Shaka Smart in 2011, and went to the NCAA tourney seven consecutive seasons from 2011-17. Ranked first in resources and facilities, second in media exposure, game atmosphere and getting kids into school.

Where they win: “Incredible support, tremendous facilities and no football. The atmosphere is second to none in the league.” – A-10 assistant

The knock: “The expectations. They are insane. Also have to recruit with two ACC schools in the state and the Triangle ACC schools two hours away. There are a lot of players, but you are fighting big-time programs for a lot of the players.” – A-10 head coach

3. Saint Joseph’s (77) – The Hawks finished the regular season undefeated back in 2003-04, and have gone to the NCAA tourney six times since 2001. Phil Martelli has been at the helm since 1995, and has gone to the NCAA Tournament seven times and the NIT six times.

Where they win: Great history and tradition, one of the better locations in the league and also can sell pros like Jameer Nelson.

The knock: “Good recruiting base, but the problem is there’s a ton of other programs in the area they have to fight for.” – A-10 head coach

4. Rhode Island (76) – The program went from 2000 to 2016 without going to the NCAA tourney, but have gone two consecutive seasons under now-UConn Head Coach Dan Hurley. The Ryan Center and facilities are towards the top of the league.

Where they win: “One of the better arenas in the league, good recruiting corridor with New England prep schools and NYC, and easy admissions.” – A-10 head coach

The knock: “Bad campus, not much tradition and name recognition. Apathetic fan base unless they are winning.” – A-10 assistant coach

5. UMass (74) – The program went to the Final Four back in 1996, but there’s been just a single NCAA tourney appearance since Bruiser Flint took the Minutemen in 1998. There’s history, resources and its also nice and easy to get (and keep) kids in school.

Where they win: “Facilities are in the top half of the league, they have great history and tradition from the John Calipari Era and the fans are rabid – when they win. Can also get just about anyone who walks and chews gum into school.” – A-10 assistant coach

The knock: Expectations. Calipari took UMass to the Final Four, so that’s still the benchmark – and some in Amherst feel as though the Minutemen should be a perennial NCAA tourney team.

6. Saint Louis (71) – The Billikens have gone to the NCAA tourney nine times overall, and three times since 2012. Saint Louis has the resources, facilities and also the ability to recruit in the Midwest – which can be both good and bad.

Where they win: “Plenty of local players in the area and the only D-1 program in a city that has four million people. Great facilities and resources.” – A-10 head coach

The knock: “Being removed from the east coast in an east coast league is tough because Midwest kids are not as familiar with the A-10 as they are with the Missouri Valley. It’s also hard to keep local kids with the Big Ten, Big 12 and SEC all coming in.” – A-10 assistant coach

7. Davidson (64) – It’s now become known as the school that produced Steph Curry, but Davidson has played in 14 NCAA Tournaments. The hardest part is that the budget isn’t yet what it needs to be in the A-10, but it took a step up from the SoCon and will need to pour more resources to stay competitive.

Where they win: “The campus is beautiful, and so is the weather. It’s near Charlotte, and obviously they can sell Steph Curry. No one in the league is able to have a guy like Steph that they can sell.” – A-10 head coach

The knock: Davidson is still catching up in terms of resources after coming into the league from the SoCon a few years ago. While being the top academic school in the league can help, it also makes it more difficult to get kids into school … and keep them in.

8. Richmond (63) – The Spiders care about college hoops, but it’s been up and down. John Beilein went to one tourney in five seasons, Jerry Wainwright went once in three years and Chris Mooney has been twice in his 13-year tenure.

Where they win: “Men’s basketball is the featured sport at the school, the arena is nice and there’s a practice facility on the way. New administration that seems to be committed.” – A-10 head coach

The knock: Academics make it difficult. Admissions are tough and it’s tough to hide kids once they get into school.

Where they win: “Great location in D.C., terrific recruiting base with the proximity to DMV recruiting.” – A-10 assistant coach

The knock: “No practice facility, and the resources just aren’t what they need to be. That even includes coaches salaries, and that’s tough with the cost of living in D.C.” – A-10 assistant

10. George Mason (56) – There was the improbable Final Four appearance in 2006, but just five other NCAA tourney appearances. It made the move from the CAA to the A-10 in 2014, but Mason ranks in the bottom half of the league in just about everything except recruiting base.

Where they win: Terrific location, can sell the fact they went to the Final Four and have a passionate fan base.

The knock: While it has a terrific recruiting base, there are so many other D-1 schools in the area, which makes it difficult to get many of the local kids they target.

11. St. Bonaventure (55) – The Bonnies went to the Final Four back in 1970, but have only gone to the tournament six other times – including last season. Mark Schmidt has gone twice in his 11 seasons at the helm. Extremely poor recruiting base, but a rabid fan base.

Where they win: “The fans, student and community support. It’s the only game in town, and they love it in Olean.” – A-10 assistant

12. Duquesne (44) – There was a Final Four appearance … way back in 1940. The Dukes haven’t gone dancing since 1977, and rank last in history/tradition and TV exposure. The best thing? They rank first in buy games.

The knock: “There’s no history, no tradition, the facilities aren’t good, and no one really cares.” – A-10 head coach

T13. Fordham (41) – The Rams’ last NCAA tourney appearance was in 1992, so there’s not much in terms of history, the facilities are near the bottom of the league and the atmosphere is lacking. This is a very difficult job.

Where they win: “Support. They put money into the program, and give them what they need.” – A-10 assistant coach

The knock: “Gym, location, lack of recent tradition and perception of the program in New York City.” – A-10 assistant coach

T13. La Salle (41) – There’s actually been success, but not much lately. There’s an NCAA tourney appearance in 2013, but that’s the only time since 1992. The biggest issue for the Explorers is a much-needed upgrade in facilities, but it lacks more than just facilities and resources.

Where they win: “Recruiting base. Philly kids always look to La Salle when they transfer back home.” – A-10 assistant coach

The knock: “Facilities are awful, neighborhood is terrible, monetary support.” – A-10 assistant coach