This is how polling in the Atlantic Sun shook out among coaches who voted, with one being the best and 9 being the worst: 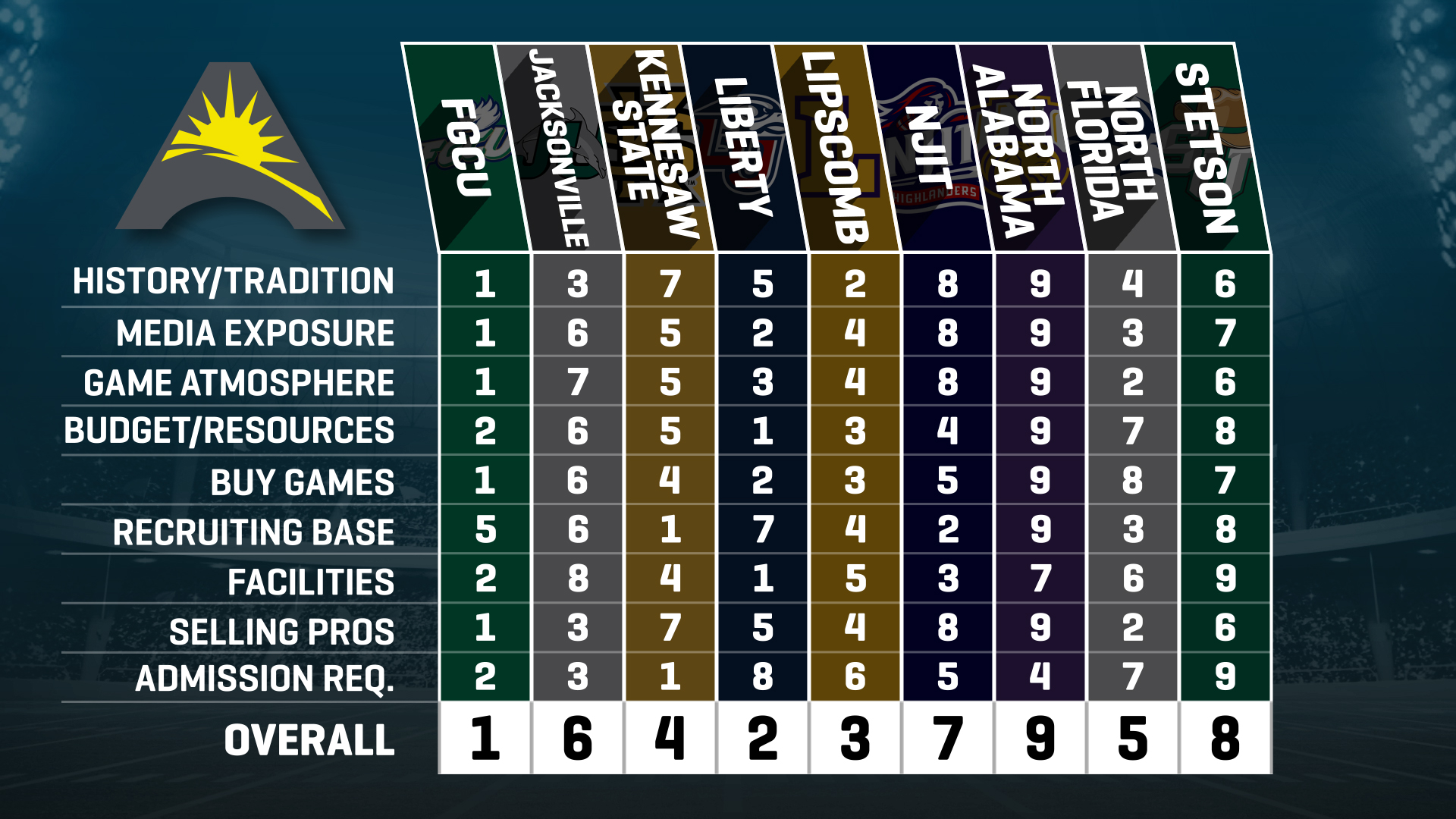 1. FGCU (74) – Florida Gulf Coast was put on the map by former coach Andy Enfield and Dunk City back when the Eagles beat Georgetown and San Diego State to make an improbable Sweet 16 appearance in 2013. However, no one knew much about Florida Gulf Coast prior to that run. FGCU wasn’t even in the D-1 ranks until 2011. But Enfield got it going, and Joe Dooley kept it going with NCAA tourney appearances in 2016 and 2017. Gulf Coast ranks near the top of the league in just about every category.

Where they win: “Tradition, best crowd in the league, a national brand, great location and weather, the second-best facilities in the league and a terrific recruiting base with the ability to keep kids in state.” – A-Sun head coach

The knock: “Expectations. Fans expect an NCAA tournament bid every single year, and the resources still aren’t what they need to be. This isn’t VCU.” – A-Sun head coach

2. Liberty (56) – They just moved into the Atlantic Sun from the Big South, where they spent nearly three decades as a member. The Flames have gone to the NCAA tourney three times – in 1994, 2004 and 2013. Ritchie McKay is in his second stint as head coach, and has taken the team to the CIT each of the past two seasons.

Where they win: “Support, support, resources, resources. They have the best resources in the league, and great facilities. They only thing that Florida Gulf Coast has that they don’t is the beach.” – A-Sun assistant coach

The knock: “It’s known as an ultra-religious Christian school founded by Jerry Falwell, so that eliminates a good amount of kids. You have to be the right fit for Liberty.” – Big South assistant

3. Lipscomb (55) – The Bisons went to the NCAA tourney for the first time in school history last year under Casey Alexander, who came to Lipscomb five years ago after spending two as the head coach at Stetson. Lipscomb was a long-time NAIA program that played its first full D-1 schedule in 2001. Lipscomb didn’t rank first in any of the categories, but consistently ranked in the top four spots.

Where they win: “The administration gets it, and you can sell Nashville.” – A-Sun head coach

The knock: “No real brand recognition, especially prior to last season when they made the NCAA tourney. Small, private, Christian school in the Bible belt, which can be both difficult and also an asset. You can’t take certain kids there, but that’s also part of what’s good about the job.” – A-Sun assistant coach

4. Kennesaw State (51) – They won the national title in 2004, when the Owls were a Division II program. Since entering the A-Sun, Kennesaw State has yet to finish .500 overall, and has yet to finish better than .500 in league play. However, there are many who are baffled by the lack of success with the program due to the terrific recruiting base, facilities, etc.

Where they win: “It’s a sleeping giant in the league. Very good facilities, they have money, there’s tons of talent in the area.” – A-Sun head coach

The knock: “It’s tough to say. It’s a really good job, but they just can’t get it right there. I honestly don’t know why because they have just about everything you need. I guess the one thing they are missing is any sort of tradition at the D-1 level.” – A-Sun assistant

5. North Florida (48) – The Ospreys went to the NCAA tourney in 2015 and the NIT the following season under Matt Driscoll, but UNF was in the Division II ranks until 2005, when they transitioned into D-1. Driscoll has done a tremendous job, especially given the fact that the resources aren’t on par with many of the others in the league.

Where they win: “Beautiful campus, solid facilities and good recruiting base since they are within a drive to Miami, Atlanta and Charlotte.” – A-Sun head coach

The knock: UNF gets bought more than anyone else in the league besides maybe newcomer North Alabama, and that’s extremely difficult. Also tough academic standards, and resources aren’t quite up to par with the top-tier programs in the league.

6. Jacksonville (42) – There has been some history for Jacksonville, but it dates back a while. The Dolphins have played in five NCAA tournaments, but the most recent was way back in 1986 under Bob Wenzel. They actually went to the national title game in 1970 with Artis Gilmore leading the way.

Where they win: “They have some history, even if it was before all these kids were ever born. The location is also a major plus – Jacksonville is a great town.” – A-Sun head coach

The knock: “The facility is really shitty, worse than a high school gym.” – A-Sun assistant

7. NJIT (39) – The New Jersey Institute of Technology doesn’t quite fit within this league, especially geographically, being based in Newark, New Jersey. NJIT had been part of the Great West Conference, but that league fell apart and NJIT was without a home until 2015, when it joined the Atlantic Sun. NJIT ranks towards the bottom in history, TV exposure, game atmosphere and selling pros, but does have a nice recruiting base and top-half-of-the-league resources.

Where they win: “One of the best facilities in the league, and they can sell that they are different than everyone else in the conference.” – A-Sun assistant

The knock: “You ever been to Newark? It’s not exactly a major selling point. The other thing is that the school doesn’t really fit within the league.” – A-Sun assistant coach

8. Stetson (24) – The program entered the Atlantic Sun in 2001 and just hasn’t had much success. There have been just three seasons in which the Hatters have finished above .500 in league play – 2006, 2008 and 2013. Current Head Coach Corey Williams has won just 19 league games in his five seasons at the helm. Stetson ranks in the bottom half of the league in every single category.

Where they win: “They are arguably the best academic school in the league, and can sell that … although it also hurts them. It’s also less than an hour from Orlando – which definitely helps.” – A-Sun assistant

The knock: “The Edmunds Center needs a facelift. It’s terrible, the worst place to play in the league. It’s also hard to get kids into school.” – A-Sun assistant

9. North Alabama (16) – Tony Pujol takes over a program that comes over from the Gulf South Conference in the Division 2 ranks. UNA has gone to 14 NCAA tournaments, eight regional championships, five Final Fours and a pair of national championships, but now it’ll be difficult in the transition to Division 1.

The knock: “It’s always tough to go from Division II to Division I. It’ll take time because there’s no name recognition and not enough resources yet. Oh yeah – the location isn’t great, either.” – D-II assistant