Seven Big Ten teams heard their names called Selection Sunday and will head to the NCAA Tournament. Let’s break down how long we think they can last in this edition of Livin’ B1G.

Getting seven teams in the NCAA Tournament after what has been widely perceived as a down year is an accomplishment for the Big Ten. That’s not counting the fact the Illinois and Iowa were making legitimate cases for invitations heading into conference tournament season.

But the committee made sure not to give Big Ten fans any reason to brag, handing out its highest seed for the conference representatives to Purdue, which is a No. 4 in the Midwest Region after winning the B1G regular-season crown.

Committee chairman and Michigan State athletic director Mark Hollis reminded viewers numerous times during his post-bracket interviews that the committee begins seeding times well before Selection Sunday. And what that means is the committee hasn’t been impressed with the Big Ten for awhile.

The conference can put all that to rest with a good showing in the Tournament, but most teams received a tough draw and will have a tall order ahead to even reach the Sweet 16. Let’s take a look at each of the seven Big Ten teams heading into the Big Dance, broken down by region, and how far we think they’ll advance – if at all. 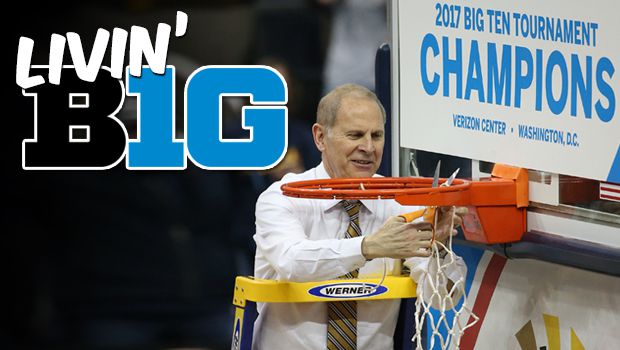 The Boilermakers are the Big Ten’s highest-seeded team despite them not winning a game in the conference tournament. They won eight of their previous nine, though, and have a national player of the year candidate in Caleb Swanigan, who is tied for the national lead with 26 double-doubles.

Carsen Edwards, Vincent Edwards and Isaac Haas also average in double figures, and Dakota Mathias can be deadly from 3-point range. But Purdue also will be running into a red-hot No. 13 seed in Vermont, which has the nation’s longest winning streak at 21. The winner of Iowa State/Nevada waits in the second round if it can get past the Catamounts.

Prediction: Loses to No. 1 Kansas in Sweet 16

From a runway ditch to Big Ten tournament champions. Michigan’s story over the past week is pretty remarkable after the frightening event that led the Wolverines to arrive shortly before tip-off of their first game in Washington, D.C. Then they had to play that contest against Illinois in their practice jerseys.

Hollis said the committee had Michigan as a No. 8 seed heading into the Big Ten title game, but it flipped the Wolverines to a No. 7 and moved runner-up Wisconsin down a line. They’re entering the NCAA Tournament as one of the hottest teams in the nation and will face 10th-seeded Oklahoma State, which has something to prove as well. But if Michigan continues to get solid contributions from Derrick Walton Jr., Moe Wagner, Zac Irvin, D.J. Wilson, etc., it could make a decent run.

Prediction: Loses to No. 2 Louisville in second round

It’s always tough to bet against Tom Izzo in March even after his Spartans lost in the first round as a No. 2 seed last year. But this season is different, and injuries have plagued Michigan State throughout while having to rely too heavily on star freshman Miles Bridges.

Izzo is trying to instill more fight in his young team ahead of its matchup with No. 8 Miami in the first round. The Spartans bowed out of the Big Ten tournament quarterfinals against Minnesota and struggled offensively, like it has most of the season because of turnovers. Unfortunately, Izzo will have another quick exit from the Tournament. Hurricanes coach Jim Larrañaga sent Izzo home early in 2006, too, when his 11th-seeded George Mason squad beat the Spartans in the first round on its way to the Final Four.

Prediction: Loses in first round to No. 8 Miami

The Terps were riding high with a 20-2 record at the end of January and were looking like a team that would be dangerous come March. But they went 4-6 the rest of the way and were no match for Northwestern in the Big Ten tournament despite playing essentially a home game at the Verizon Center.

Melo Trimble is the leader of a young team that starts three freshmen and will need to play efficiently for Maryland to make any noise. That means he can’t take bad shots like he’s prone to do. The Terps drew No. 11 Xavier in the first round, and they’re going to have a tough time just getting through that one.

Prediction: Loses to No. 3 Florida State in second round

The darlings of the dance. Now it’s hoping to be around when the music starts. Northwestern is making its first-ever NCAA Tournament appearance, and the Wildcats simply getting an invitation tugs at my heart strings. But let’s not lose sight of reality here.

Northwestern is a good team, but No. 9 Vanderbilt isn’t going to give the Wildcats a free pass. They just got exposed horribly in the Big Ten semifinals, falling to Wisconsin by 28 points in an absolute massacre. Northwestern has gone just 5-7 since Feb. 1 and will need to play much better if it wants to advance. I think it has enough to get out of the first round, but not beyond that.

Prediction: Loses to No. 1 Gonzaga in second round

There’s plenty of uproar about the Golden Gophers getting bumped up to a No. 5 seed despite losing to Michigan in the Big Ten semifinals. That must mean Hollis and the committee thought very highly of Minnesota well prior to that defeat.

And don’t get me wrong – the story is great. Richard Pitino turned last year’s eight-win team into a squad sitting in the top half of the South Region, and that’s no small feat. But the Gophers have dropped two of their last three games, one against No. 8 seed Wisconsin and the other against those seventh-seeded Wolverines. The also barely knocked off No. 9 seed Michigan State in the Big Ten quarters.

We can’t forget either that Akeem Springs is out for the Tournament. Nate Mason is a solid player and Amir Coffey is a budding star, but the Gophers aren’t as good as the committee thinks.

Prediction: Loses to No. 12 Middle Tennessee in first round

The Badgers not long ago were being thought of as a potential No. 4 or No. 5 seed, then dropped five of six to end the regular season. They salvaged a run to the Big Ten title game, but the blowout loss to Michigan sank them again.

Wisconsin has one of the top big men in the country in Ethan Happ, plus experienced players like Bronson Koenig and Nigel Hayes who have played in a national championship game and are used to deep NCAA Tournament runs. I just don’t like their draw.

Prediction: Loses to No. 1 Villanova in second round

MORE: Cuonzo Martin Is The Safest Hire For Illinois, But Not The Best