Here are the eight categories that were utilized to determine the overall rankings. Admission requirements – a category in our other “Conference Chain of Command” rankings – was not included for the Big East, since they’re mostly the same for each school.

This is how polling in the Big East shook out among coaches who voted, with one being the best and 10 being the worst: 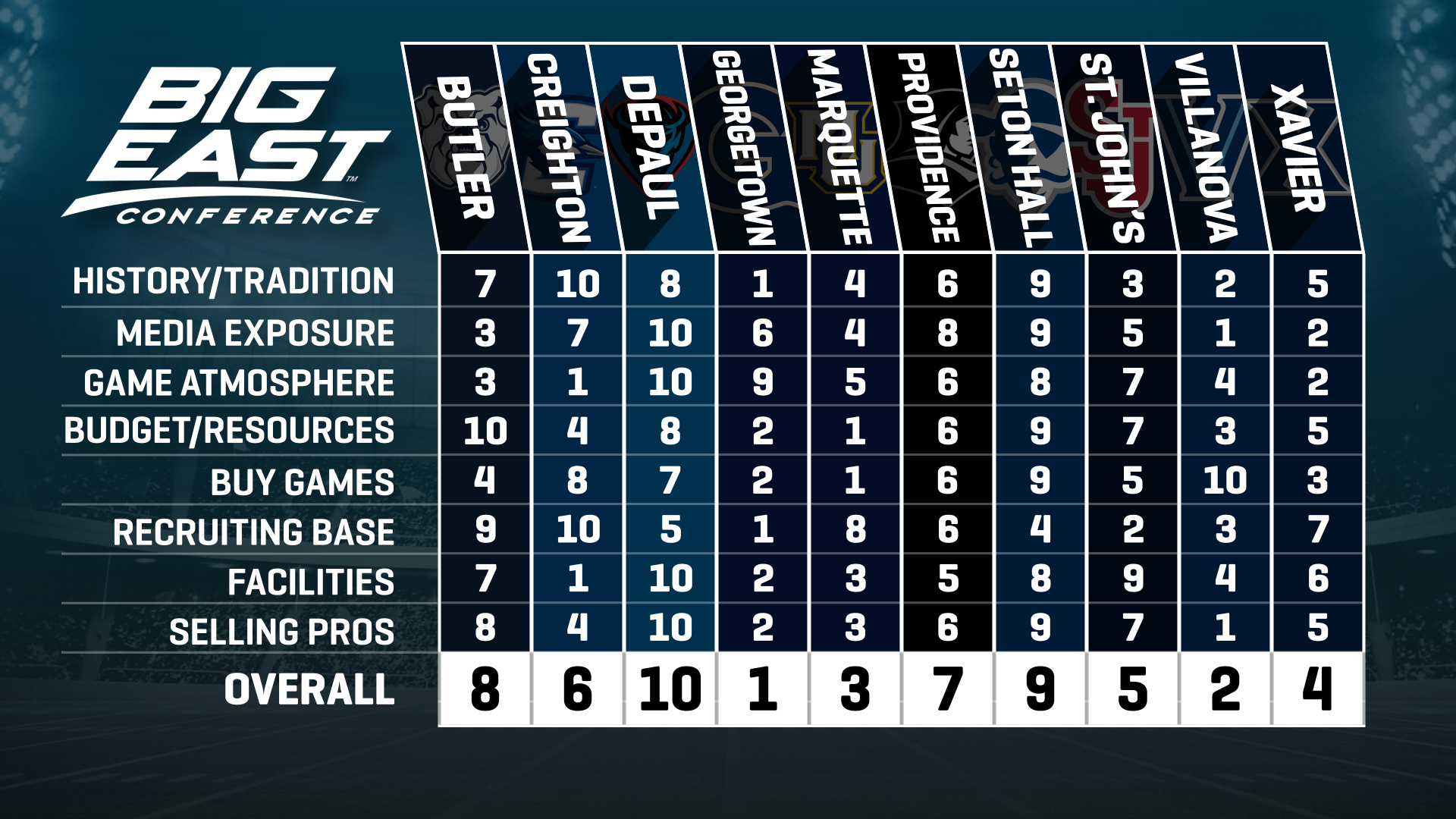 1. Georgetown (63) – Sure, it’s been a while – but the Hoyas did win a national title in 1984 and go to the championship game in both 1982 and 1985. There certainly hasn’t been a ton of national relevance lately, but Georgetown has still gone to the NCAA tourney nine times since 2000. Georgetown is also located in one of the best areas in the country as far as recruiting is concerned, has a ton of resources and can sell a plethora of NBA big man – including its coach.

Where they win: “It’s the best job in the league because it has everything you need. So many players locally, big-time resources, a new practice facility and tradition. Sure, they haven’t been good lately – but there’s a reason a ton of guys were interested in the job when it opened up last year. It’s a gold mine.” – Big East assistant

The knock: “There’s really not much that you don’t have at your disposal. There hasn’t been much energy at Capital One Arena, and it’s probably too big for Georgetown – especially when they aren’t winning. The only other thing has been the Thompson family, and the perception that Big John runs everything over there. That didn’t help when they were trying to hire a coach.” – Big East coach

2. Villanova (60) – If you’re looking at performance over the last few years, most would pick ‘Nova ahead of Georgetown. However, Georgetown’s overall tradition is stronger, and one area that makes ‘Nova less attractive is that it’s forced to play in the Big 5 instead of loading up with cupcakes in the non-league slate. Villanova ranks first in exposure, and in the top three of the league in everything except for buy games.

Where they win: “Villanova just has a culture now, but so much of it has been based on Jay Wright. Don’t get me wrong: it’s a very good job, but not as good as Georgetown. Villanova isn’t a Top 10 job nationally, and it may not even be a Top 20 job. Jay has just done a tremendous job over the last few years. They can sell their culture, Philly and exposure – but not to the level of the bluebloods.” – Big East head coach

The knock: “Expectations and facilities. The expectations are out of whack these days because ‘Nova doesn’t stack up to programs like Kentucky or Kansas – yet they are recruiting against some of them now. Also, while they made some improvements to the facilities, they still aren’t blow-you-away good.” – Big East assistant

3. Marquette (59) – No one in the league has more resources, and just about every coach has had success – although different levels. Al McGuire led Marquette to its lone national championship way back in 1977, Kevin O’Neill took the program to the Sweet 16 in 1994, Tom Crean went to the Final Four in 2003, Buzz Williams went to an Elite Eight and a pair of Sweet 16’s in his final three seasons. The only real downside is its recruiting base.

Where they win: “Resources, game facilities, support from the administration and fan base. This is a much better job than people realize. Marquette has everything.” – Big East administrator

The knock: “Not a ton of kids in Wisconsin, and the ones that do come out of there want to go to Wisconsin and not Marquette. Other than that, it’s one of the more underrated jobs in the league … and maybe in the entire country.” – Big East assistant

4. Xavier (53) – Pete Gillen went to the NCAA tourney seven times in nine years in the 1980’s and early 1990’s, and every coach since Gillen has been extremely successful: Skip Prosser, Thad Matta, Sean Miller and Chris Mack. The Cintas Center ranks second behind Creighton for the best atmosphere in the league, and the fan support is strong – as well as the financial support from the administration.

Where they win: “Everyone has won there, so it’s set up to win. They have the resources, the support, the facilities, the fans. Plenty of players in the region, so there’s little downside to the job. It was one of the best mid-major jobs in the country when they were in the A-10, now it’s a little different – but still a really attractive job.” – Big East administrator

The knock: “They have won at a high level, but still don’t have the juice in the midwest to beat Ohio State for a kid in their own state, or beat Indiana for a kid from Indiana. Most midwest kids want to play in the Big Ten. And kids from the northeast still don’t really identify with Xavier. They’d rather go to a local Big East school.” Big East assistant

5. St. John’s (44) – The history was so strong back in the 1980’s and even the 1990’s, but it’s been scarce over the last couple decades – going to just three NCAA tourneys after 2000. The recruiting base is strong, although there hasn’t been quite as much high-level talent coming out of New York as was the case years ago. The Johnnies play a few of their bigger games at Madison Square Garden, but most of them are at the Carnesecca Arena – which is down the totem pole when it comes to facilities in the league.

Where they win: “New York. The media market. If you get it going, people love it. But it’s been a while. Fans want St. John’s to be successful, and they want to come to Madison Square Garden and watch college hoops.” – Big East assistant

The knock: “Dealing with all the bullshit in New York, and the area being down lately in terms of local guys who fit St. John’s. It’s also tough with so many other things going on in New York. Unless St. John’s is really good, not enough people care.” – Big East assistant

6. Creighton (43) – Joined the league in 2013 from the Missouri Valley – where the Bluejays were a member from nearly three decades. Creighton has been in the NCAA tourney 20 times – and have fared better than many expected in the Big East after losing Doug McDermott. But facilities and support are two factors that make sure it’s in the middle of the Big East, even after stepping it up from the Valley.

Where they win: “Fan support. They pack the building with 17,000 every single night. The facilities are top notch, and the fans travel.” – Big East assistant coach

The knock: “Location makes it tough. Just not a lot of players in the state, and the area, certainly compared to all the other schools in the league.” – Big East head coach

7. Providence (39) – Rick Pitino took the Friars to the Final Four in 1987, but it’s been hit or miss with the program. Tim Welsh went to the NCAA tourney twice in a decade and Keno Davis was 0-for-3. However, Ed Cooley has it rolling, going to five straight NCAA tourneys. Providence ranks in the middle of the pack in just about everything – although the facilities recently a major upgrade with the addition of a big-time practice facility.

Where they win: “Rabid fans and basically the only game in town. It’s an underrated environment because the student section is unruly. I haven’t seen it yet, but I have heard the new practice facility is insane.” – Big East assistant

The knock: “The ‘Dunk just doesn’t do it for me. It’s old, and blah. The city is OK, but it’s still a ways from both New York and Boston.” – Big East assistant

8. Butler (37) – Let’s face it: For everything that Barry Collier and Thad Matta did at Butler, Brad Stevens put the program on the national map when he took the Bulldogs to the national title game in 2010 and 2011. Both came when Butler was a member of the Horizon League. Despite the step up from the Horizon to the Big East in a short period of time, the Bulldogs have found a way to stay relevant with former coach Chris Holtmann taking the Bulldogs to three consecutive NCAA tournaments from 2014-17, and current coach LaVall Jordan extending the streak in his first season a year ago.

Where they win: “They have a great fan base, the perfect college basketball venue in Hinkle and a culture. The administration “gets it.” – Big East head coach

The knock: “It’s a smaller, private school and the size doesn’t appeal to everyone. The resources have improved, but still aren’t quite at the level of the majority of the league.” – Big East assistant

9. Seton Hall (23) – Bill Raftery was the coach when they joined the Big East back in the late 1970s, but it was P.J. Carlesimo who enjoyed the most success as a coach – taking the Pirates to the national championship game in 1989 and the Elite Eight two years later. It’s been a mixed bag since, but not all that much success – with George Blaney failing to go to the NCAA tourney in his three years at the helm, Tommy Amaker going once in four seasons, Louis Orr going twice in five years and Bobby Gonzalez going 0-for-4. Kevin Willard got off to a slow start, but has made three consecutive NCAA tourneys.

Where they win: “I don’t like where it’s located, and wouldn’t want to live there, but it’s close to a ton of players. That’s by far its biggest selling point.” – Big East assistant

The knock: “It’s got a bunch of them. For one, they play their games in Newark – which is a dump – in an arena that’s way too big for them. Not enough support, and doesn’t have much juice in recruiting.” – Big East assistant

10. DePaul (20) – Ray Meyer had it going at DePaul in the 1970s and 1980s, taking the program to the Final Four in 1979 and the Elite Eight the previous season. Joey Meyer took over and started well, but it didn’t end well after the program transitioned into C-USA. Pat Kennedy failed, and Jerry Wainwright and Oliver Purnell – who coached DePaul in the Big East – weren’t much better. Dave Leitao’s second stint has been rough, but at least they have a nice, new facility.

Where they win: “Chicago. It’s a blessing and a curse. They have a beautiful new arena, but it’s not on campus – so it’s not as good as it could be.” – Big East head coach

The knock: “Chicago. Tough place to navigate, especially if you have no pop and no juice. DePaul was good, but the only people who remember are those in the nursing homes.” – Big East assistant