This is how polling in the Big Sky shook out among coaches who voted, with one being the best and 11 being the worst: 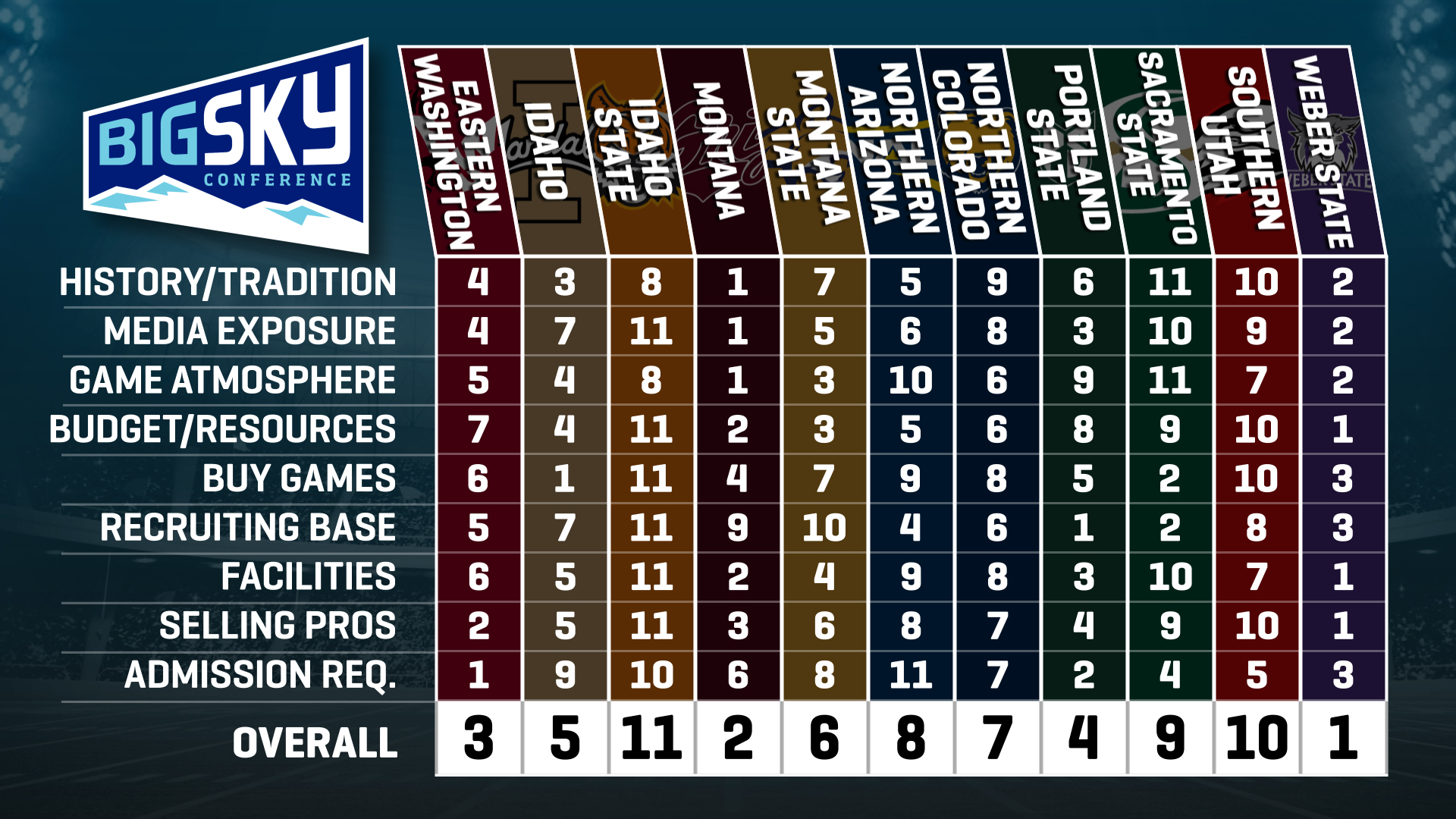 1. WEBER STATE (90) – The program has 16 NCAA tourney appearances to its credit – including a trio under current coach Randy Rahe. Here’s an interesting fact: Dick Motta took the Wildcats to their first tourney in 1967. There was a lull under Larry Farmer (1985-88) and Denny Huston (1988-1991), but every other coach has at least one NCAA tourney on his resume with the program. Weber ranked in the top three in all nine categories.

The knock: “I’m not really sure there is one. It’s clearly the best job in the league.” – Big Sky assistant

2. MONTANA (79) – The Grizzlies have gone to 11 NCAA tournaments. Blaine Taylor took them to a couple (1992 and 1997), Larry Krystkowiak went in both of his years at the helm (2005 and 2006), Wayne Tinkle was successful and went three times and current coach Travis DeCuire is coming off an NCAA tournament appearance. Montana tops the league in history/tradition and game atmosphere, and is second in both budget and facilities.

Where they win: “They have elite facilities, tremendous support from the community, and they can buy games instead of being bought.” – Big Sky head coach

The knock: “It’s in Montana. Proximity to talent. You’re lucky if you have one player in the state each year.” – Big Sky assistant

3. EASTERN WASHINGTON (68) – Have been to the NCAA tournament twice – in 2004 under Ray Giacoletti and in 2015 under Jim Hayford. It’s been in the Big Sky since 1987. It’s easy to get kids into school, and they also have the ability to sell pros more than most, with guys like Rodney Stuckey and Tyler Harvey, who was drafted in 2015.

Where they win: “Spokane is a better location than most Big Sky cities. Great college town. That’s probably the best selling point. Well, that and the fact that you need a pulse to be able to get into school.” – Big Sky assistant

The knock: “You fly into a Pac-12 city and then get on a bus to a Big Sky city. They also don’t have the same budget as most of the other schools in the league.” – Former Big Sky coach

4. PORTLAND STATE (67) – The Vikings went to the NCAA tourney in back-to-back years in 2008 and 2009 under Ken Bone, but haven’t had much success other than those two seasons. Great recruiting base and now home to one of the better facilities in the league.

Where they win: “They can sell the city of Portland. Nike is nearby and that helps, and they have a terrific new arena.” – Big Sky head coach

The knock: “Not much tradition, and a lot of other things going on in the city of Portland.” – Big Sky assistant coach

Where they win: “Cool college town, and the job will become much better in a few years when they open a new arena. Budget is pretty good relative to the rest of the league.” – Big Sky head coach

The knock: “You’re out there in the middle of nowhere. The location is tough. You have to get on a plane to go recruit.” – Big Sky head coach

6. MONTANA STATE (55) – The Bobcats went to the NCAA tournament in 1951, 1986 and 1996 – but have had an overall record of better than .500 just twice since 2000. Montana State put forth a $3 million renovation of the 4,500-seat Worthington Arena in 2014. The program ranks towards the top of the league in budget/resources and game atmosphere, but only ahead of Idaho State in recruiting base.

The knock: “Not exactly a lot of players coming out of Bozeman, Montana – or anywhere close to Bozeman, Montana. Makes it tough to recruit. Also, Bozeman is a rustic town – not exactly where you want to go if you’re a 17-year-old kid.” – Big Sky assistant

7. NORTHERN COLORADO (43) – The Bears have gone to the NCAA tourney just once – in 2011 with B.J. Hill at the helm. The program went into the Big Sky in 2006, and has enjoyed pretty good success, finishing with a .500 or better record seven times since entering the league. Northern Colorado ranks in the middle of the league in eight of the nine categories.

Where they win: “It’s about an hour from Denver, so that’s a major plus for the program. There’s also no pressure to win and an awful football program, so you are the main draw at the school.” – Big Sky coach

The knock: “Facilities aren’t great, but you do have a practice gym. Arena just isn’t very good. Athletics as a whole just aren’t that important, they aren’t a priority.” – Former Big Sky coach

8. NORTHERN ARIZONA (41) – Located in Flagstaff, the program has been in the Big Sky since 1970. There have been a pair of NCAA tourney appearances in 1998 and 2000 under Mike Adras. It’s the toughest place in the league academically, which makes it difficult to get kids into school and keep them in.

The knock: “Playing in that dome sucks. Academics are also the toughest in the league.” – Big Sky assistant

Where they win: “You’ve got a lot of dudes in the area, it’s a great city and a beautiful campus. Also easy to get kids into school.” – Big Sky assistant

Where they win: “Couple hours from Las Vegas, so you can recruit Vegas. Pretty nice arena, and not many distractions for the players out there.” – Big Sky head coach

The knock: “No tradition, so remote, one of the smaller budgets in the league and the fact that Vegas is the closest spot to really recruit – and it’s a couple hours away.” – Big Sky assistant

11. IDAHO STATE (16) – Ranked dead last in six of the nine categories. The Bengals have been in the Big Sky since 1963, and do have some history – going to the West Region finals back in 1977 after knocking off UCLA and coming within a win of the Final Four.

Where they win: “I don’t know if there is one. Great place to raise a family.” – Big Sky assistant

The knock: “Everything. Location – in the middle of nowhere. Academically, it’s not easy to get kids in. Budget-wise, it’s not good.” – Former Big Sky coach