This is the fourth in Stadium’s “Conference Chain of Command” series in which we polled a handful of veteran coaches in every league to determine the best JOBS in each league, all the way down to the ones that are the most difficult.

This week’s Chain of Command is being published on Thursday instead of Friday due to Big Ten Media Days taking place on Thursday.

Here are the eight categories that were utilized to determine the overall rankings. We did not utilize buy games as a category for the Big Ten because just about every program has the resources to buy a similar number of games.

This is how polling in the Big Ten shook out among coaches who voted, with one being the best and 14 being the worst: 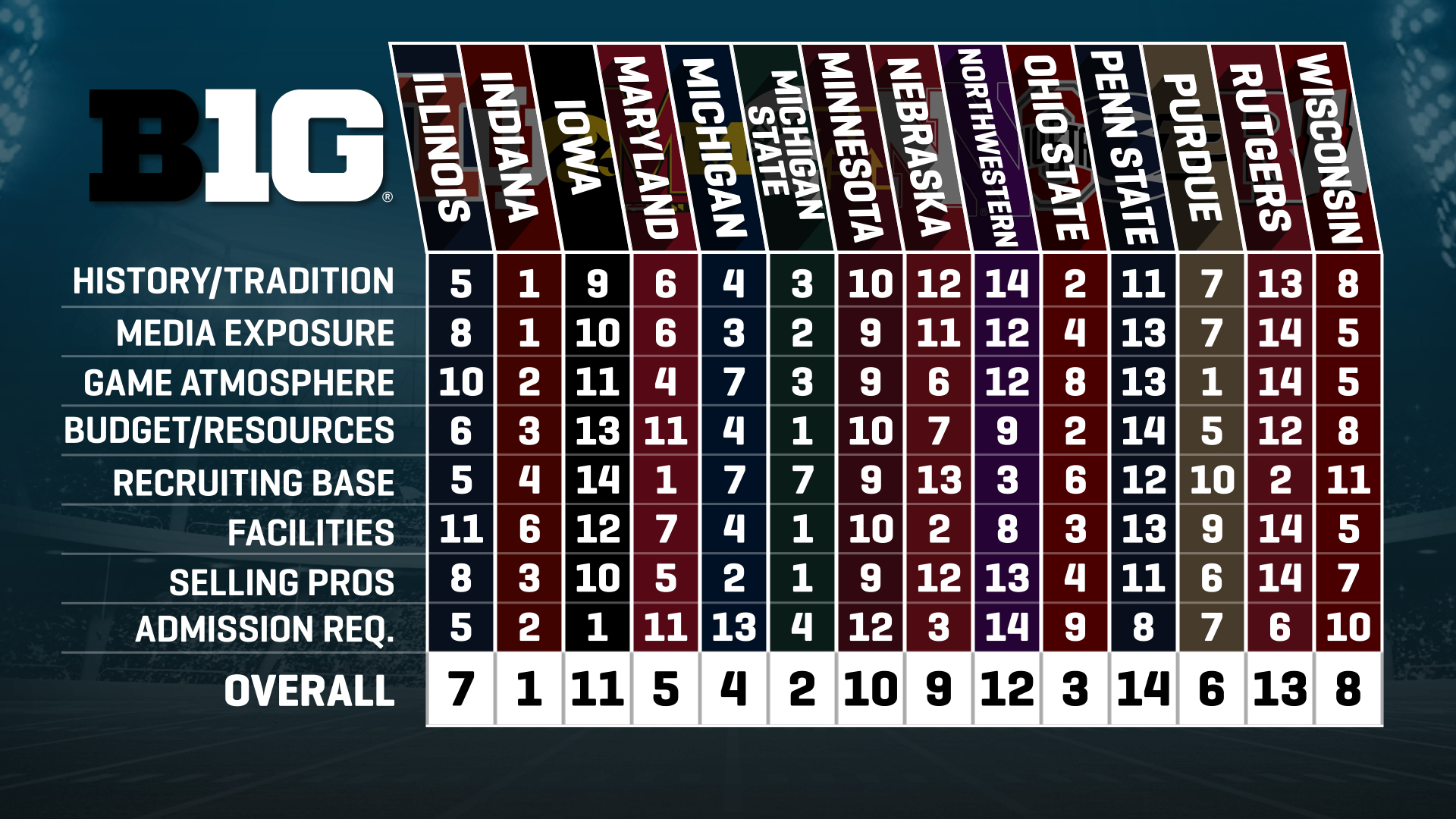 1. Indiana (98) – The Hoosiers are one of the more storied programs in college basketball history, but most of the success came decades ago. They have five national titles on their resume and eight Final Four appearances. Tom Crean took over a mess, but still underachieved, only going to four NCAA tourneys in nine years and failing to get past the Sweet 16.

Where they win: “The history, the tradition. Fans are always at the games wearing red, even when they aren’t that good, they show up. People in the state care about Indiana basketball.” – Big Ten head coach

The knock: “They haven’t been good in a long time.  The fans need to get over it. They still have catching up to do in terms of facilities. It’s a great job, but it’s not quite as good as some think.” – Big Ten assistant

2. Michigan State (97.5) – The Spartans have gone to nine Final Fours, including seven since Tom Izzo took over in 1995. Michigan State isn’t on the top-tier among college hoops jobs, but Izzo has helped make it a clear top-10 gig. There’s plenty of support from administration to fans, and no shortage of resources.

Where they win: “Tradition, atmosphere and support at a high level. The Breslin Center is probably the best place in the league to play. It’s pretty sweet.” – Big Ten assistant

The knock: “There’s not much, except for the fact that they might actually be second in their own state in that Michigan is a far more powerful brand – especially nationally.” – Big Ten administrator

3. Ohio State (82) – The Buckeyes have plenty of history, albeit significantly less in hoops than both Indiana and Michigan State. Ohio State remains a football school, but the Buckeyes won a national title in 1960 and have lost in the championship game in 1939, 1961, 1962 and 2007. Ohio State has had plenty of talent, from Jerry Lucas to Jim Jackson to Greg Oden and Mike Conley Jr. Chris Holtmann is in his second season after taking over for Thad Matta, who went to nine NCAA tourneys in 13 seasons (the Buckeyes were ineligible his first year in Columbus).

Where they win: “It’s the flagship program in the state, and there are a ton of good players in the state of Ohio.” – Big Ten assistant

The knock: “I’m not a big fan of their arena. It’s not really a huge home court advantage and the fans are far from the court.” – Big Ten assistant

4. Michigan (75.5) – When you think of Michigan hoops, you think of the Fab Five – the group that lost in the national title game in 1992 and 1993. But it’s a program, while having some down years, that has churned out no shortage of pros, and also gone to eight Final Fours. Current coach John Beilein has taken the Wolverines to a pair of Final Four appearances.

The knock: “Football school … And the fans are wine and cheesy, a little arrogant.” – Big Ten assistant

5. Maryland (69) – The atmosphere and fan support is near the top of the league and there’s certainly a solid tradition (a national title in 2002 and 14 Sweet 16’s), but Maryland hasn’t quite lived up to the expectations of what some might consider a top-10 job nationally. The recruiting base ranks first in the league, but the budget/resources are lacking compared to the top programs in the Big Ten.

The knock: “No identity in the Big Ten. They shouldn’t even be in the league.” – Big Ten head coach

6. Purdue (68) – The Boilermakers have gone to the Final Four twice – in 1969 and 1980. Matt Painter has taken them to the Sweet 16 four times in his tenure, and found a way to keep the program nationally relevant for the most part since taking over in 2005, but hasn’t been able to get them past the Sweet 16.

Where they win: “They are always pretty good, so I’d say tradition, I guess. I also think they are in a good location in that you can drive to Indy, Chicago and even St. Louis and Ohio to get players.” – Big Ten assistant

7. Illinois (62) – The Illini haven’t won a national title, but went to the championship game in 2005 and have been to four other Final Fours – in 1949, 1951, 1952 and 1989. There’s a decent tradition, but the fans are a little unrealistic with regards to expectations. Bill Self was successful in his brief stint, Bruce Weber went to six NCAA tournaments from 2003-12, but John Groce struggled in his time in Champaign.

Where they win: “Location. Chicago has a ton of players.” – Big Ten head coach

The knock: “The fan base has no clue – such unrealistic expectations. They are nuts. Plus, Chicago has players – but it might take a little more than a scholarship to get a lot of them.” – Big Ten assistant coach

8. Wisconsin (61) – The Badgers had a heck of a run a few years ago, going to the Final Four in 2014 and 2015 with a group that produced a pair of NBA players in Frank Kaminsky and Sam Dekker. Bo Ryan was a lock to take the Badgers to the NCAA tourney every year, but one thing that hurts the program is the lack of high-end talent consistently in the state.

Where they win: “Madison. What a great college town. I love that place, and I think kids love it there also. Also, 99 percent of the kids in the state want to go to Wisconsin.” – Big Ten assistant coach

The knock: “They are still playing that style. It’s hard to sell, especially to athletes and top-50 recruits.” – Big Ten assistant coach

9. Nebraska (54) – The good news?  The Cornhuskers have big-time facilities. The bad?  There’s virtually no players in the state. Nebraska has been to the NCAA tourney just seven times in all, and just once since 1998. It’s a football school for sure, and it’s a tough job to be the Nebraska men’s basketball coach.

Where they win: “The facilities are ridiculous. You can make a case that they are the best in the league. Fans also show up – because there’s nothing else to do in Lincoln.” – Big Ten head coach

The knock: “There’s no players in the state, and probably just the perception of the state of Nebraska.” – Big Ten assistant

Where they win: “The new practice facility is phenomenal, and you can sell Minneapolis and St. Paul. It’s an unbelievable, underrated city. They also have a good fan base.” – Big Ten assistant coach

The knock: “The weather. It blows. And unless you are really nostalgic, Williams Arena.” – Big Ten assistant coach

11. Iowa (40) – Lute Olson took the Hawkeyes to five NCAA tournament appearances in his last five seasons, George Raveling went to a pair in three seasons and Tom Davis went nine times in his 13 years with the program. Steve Alford struggled in his eight years, going twice, Todd Lickliter went 0-for-3 and Fran McCaffery is 3-for-8 thus far. The lone category where Iowa ranks in the top half of the league is in being able to get kids into school.

Where they win: “The state has a lot of dogs named Carver. There’s no doubt that Iowa is the state school. It’s also easy to get kids into school, and keep them in.” – Big Ten head coach

The knock: “There aren’t a ton of players in Iowa, and you aren’t going into Chicago, Indiana or Ohio and beating guys for kids in those states.” – Big Ten head coach

12. Northwestern (35) – Chris Collins took the Wildcats to the NCAA Tournament for the first time in school history in 2017. There’s just not much tradition, but the major selling point is the academic component. There’s also no shortage of talent in the area, but the question is whether Northwestern can get the kids into school.

Where they win: “The degree. It’s what you have to sell. The academics and also the city of Chicago.” – Big Ten administrator

The knock: “There are so many other things to do in Chicago on the list. It’s way, way down the list.” – Big Ten assistant

13. Rutgers (31) – Rutgers actually played in the Final Four back in 1976, but there hasn’t been much to brag about if you’re a Scarlet Knights fan recently. There hasn’t been an NCAA tourney appearance since 1991, when Bob Wenzel was running things. Kevin Bannon couldn’t do it, neither could Gary Waters, Fred Hill, Mike Rice or Eddie Jordan.

Where they win: “The best thing about Rutgers?  Whoever plays them twice (laugh). I actually think they’ll be better and (Steve) Pikiell has done a good job, but it’s just a really tough job.” – Big Ten assistant coach

The knock: “It just doesn’t have any juice to it. It doesn’t really belong or fit in the Big Ten. It’s hard to sell kids in the northeast to go to Rutgers – where every other school except for Maryland is a flight.” – Big Ten assistant coach

14. Penn State (25) – There have actually been nine NCAA Tournament appearances for the Nittany Lions, but just one since 2001. Pat Chambers has knocked on the door, but has come up empty thus far in seven seasons. Ed DeChellis was 1-for-8 before being let go. Penn State ranked in the bottom four of every category except for admission requirements.

The knock: “They don’t have enough support, not for the men’s basketball program.” – Big Ten head coach