This is how polling in the Big West shook out among coaches who voted, with one being the best and nine being the worst: 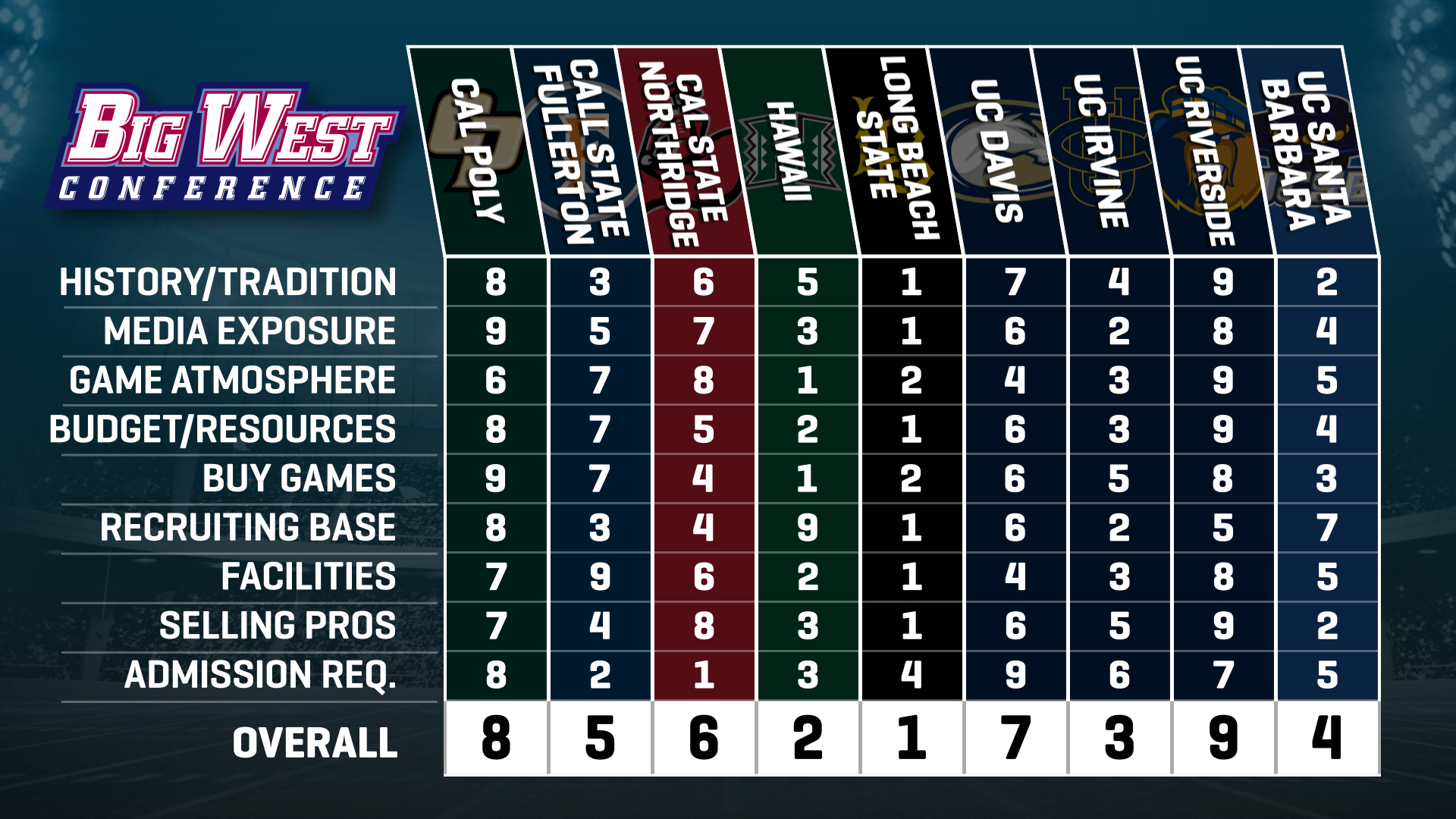 1. Long Beach State (76) – The Beach has gone to the NCAA tourney nine times – but just twice since 1995. The program has been in the Big West since 1989, and ranks first in the league in six of the nine categories. It’s clearly considered the best job in the league due to its history, resources, facilities, recruiting base, atmosphere and also the TV exposure.

Where they win: “Facilities, tradition, proximity to both players and the beach! They also have a cool gym in The Pyramid. They made it trendy and there’s even a beach section behind the court where you can have drinks.” – Big West head coach

The knock: “There’s not much negative you can say about it. I guess maybe that there’s plenty of competition for players in the area. There are six to eight other D-1 schools within an hour or two.” – Big West assistant

2. Hawaii (60) – The Rainbows have gone to five NCAA tournaments, with the most recent coming in 2016. Located in Honolulu, they went from the WAC into the Big West in 2012 under Gib Arnold. The job has its challenges – recruiting base being the most difficult – but there is plenty of support and resources, and the atmosphere inside the Stan Sheriff Center is as good as anywhere in the league.

Where they win: “Weather, weather, weather. … And atmosphere for games is always fantastic. The fans are rabid because there’s no other teams there.” – Big West assistant

The knock: “Distance. It’s just so hard to get to, and there aren’t any players in Hawaii – so you have to get on a plane to recruit every single time. You’re so isolated.” – Big West assistant

3. UC Irvine (54) – The Anteaters entered the Big West in 1988, and have gone to the NCAA tournament once – in 2015. Current coach Russell Turner took the program to the NCAA tourney, and has led Irvine to five 20-win campaigns in his eight seasons at the helm. Irvine ranks second in the league in both TV exposure and recruiting base, and in the top three of the league in five categories.

Where they win: “Desirable location in Orange County where they are tons of players in the area, program has good support and there’s no real pressure to win.” – Big West head coach

The knock: “The students and the social environment. It’s just not very good. Not a lot of people hang out on campus. The overall student experience is tough to sell.” – Big West assistant

4. UC Santa Barbara (53) – The Gauchos have gone to a handful of NCAA tournaments – in 1988, 1990, 2002, 2010 and in 2011. Jerry Pimm took the program from the Pacific Coast Athletic Conference into the Big West in 1988. UCSB ranks second in the league in history and selling pros, with guys like Brian Shaw, Conner Henry, Orlando Johnson, James Nunnally as former NBAers and Alan Williams currently in the league.

Where they win: “Location, the students and the girls.” – Big West head coach

The knock: “Santa Barbara is beautiful, but it’s harder to get to than a lot of the other places in the league. I’m also not a big fan of the Thunderdome. It’s old and needs an upgrade. – Big West assistant

5. Cal State Fullerton (44) – The Titans have gone to the NCAA tourney three times – in 1978, 2008 and last season under current coach Dedrique Taylor. The program has produced plenty of pros, including Leon Wood, Cedric Ceballos, Bruce Bowen and Bobby Brown. Fullerton ranks in the top three in game atmosphere, recruiting base, history/tradition and also selling pros.

Where they win: “Location is great. Tons of players within a drive. You can recruit LA, San Diego and the Inland Empire. The location is awesome.” – Big West assistant

The knock: “Facilities. They are old and need to be updated. Limited resources make it difficult. It’s also a commuter school so that makes it difficult to generate a true home-court advantage.” – Big West head coach

6. Cal State Northridge (41) – The Matadors went to the NCAA tourney in 2001 – when they were in the Big Sky – and in 2009 while in the Big West. The program went into D-1 in 1990, and into the Big West before the 2001 season. Northridge ranks first in the ability to get kids into school academically, but that’s the only category in which it cracks the top three.

Where they win: “You can get anyone into school … even Mark Gottfried. Alright, fine. The court is cool. It’s a blacktop court. It’s pretty sick.” – Big West assistant

The knock: “Bad facilities, such a tiny gym that feels like a high school gym, no academic support and it’s run like a Division 2 program. It’s a terrible culture.” – Big West assistant

The knock: “Academics and location. Makes it difficult to recruit, and while the campus is great, there’s nothing outside the campus.” – Big West assistant

8. Cal Poly (20) – Located in San Louis Obispo, Cal Poly went into D-1 back in the mid 1990s and have one NCAA tourney appearance – in 2014. The Mustangs rank in the bottom three of the league in eight of the nine categories, including dead last in TV exposure and the number of times they are bought for games.

Where they win: “Unbelievable area, great town with community support, and it’s a vacation destination. It’s fun and they have a ton of cute girls. It’s a great college atmosphere. Really good academics – which can be a blessing and a curse.” – Big West head coach

The knock: “Older facilities, high entrance requirements and not enough resources and a low budget. It’s also hard to get there. You’re not really close to NorCal or SoCal. You’re just out there.” – Big West assistant

9. UC Riverside (18) – The program went to three NCAA tournaments, with all three coming as a Division III program. They went into D-1 in 2001, and it’s been a tough go in the Division 1 ranks thus far, with just one season with a record of better than .500. John Masi was 34-72 in four years, David Spencer and Vonn Webb each had one season at the helm, Jim Wooldridge won 70 games in six years and Dennis Cutts was 38-57 from 2013-16.

Where they win: “The only thing is academics. Everything else is brutal.” – Big West assistant

The knock: “They play in a rec center. Public high schools have better gyms and locker rooms. They need to upgrade the facilities and step up their support.” – Big West assistant