The Big Ten’s two-year East Coast Branding Tour begins this week when the conference tournament tips off in Washington, D.C., with Purdue heading in as the No. 1 seed.

The Big Ten held its first 19 editions of the conference tournament in either Chicago or Indianapolis, both of which are in the heart of Big Ten country. But the era of conference realignment brought on numerous changes across the nation that bucked tradition, and the B1G wasn’t immune.

The additions of Rutgers and Maryland to the conference were made to extend the Big Ten’s footprint farther east to join Penn State and push the Big Ten Network into more homes. And in Jim Delany and Co.’s minds, another way to do that was send the men’s conference basketball tournament out there.

I know deep down I’m fighting a losing battle wanting at least some traditions to stick, but I can’t get over what I believe is a ridiculous move to send the Big Ten tournament to places like D.C. and New York City. I’m having trouble making sense of it, and I know I’m not alone. Nevertheless, here we are whether we like it or not.

So let’s break down the 2017 Big Ten tournament bracket and find out which teams can boost their NCAA Tournament resumes ahead of the championship game on Selection Sunday. 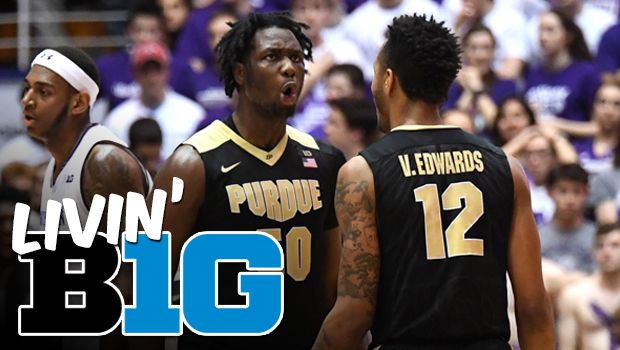 Nebraska enters having lost its last four, and Penn State’s five-game skid began with that blowout loss to the Cornhuskers, who shot 55.4 percent from the field in one of their best offensive performances of the season. But they’ve allowed an average of 85.5 points during their losing streak and while shooting 38.7 percent and are coming off a 93-57 loss to Michigan on Sunday.

Scoring 92 points in a Big Ten regulation more often than not is enough to earn a victory, usually in blowout fashion. But Ohio State gave up 96 to Indiana on Saturday to end the regular season having dropped four of its final six games. The Buckeyes now have to contend with a Rutgers team that snapped a six-game losing streak with Saturday’s 62-59 win over Illinois on Deshawn Freeman’s 3-pointer in the final seconds.

The Fighting Illini’s lost to Rutgers likely means they need to not only beat Michigan, but also top-seeded Purdue on Friday just to get back into the NCAA Tournament discussion. Illinois barely was sitting on the bubble prior to that demoralizing defeat. Michigan, on the other hand, finishing the regular season winning six of eight and should lock up an at-large bid with a victory. The Wolverines still have a shot even with a close loss, but that would make the committee’s decision a bit tougher.

The Spartans have lost back-to-back games to Illinois and Maryland, making this game more important than it probably should be. Sunday’s heartbreaking 63-60 loss to Terps on Melo Trimble’s 3-pointer in the closing seconds prevented Michigan State from getting the double bye and skipping ahead to Friday. Most believe the Spartans are in the NCAA Tournament given their rough non-conference schedule, but a loss here might change the committee’s mind.

Iowa’s thrilling win over Indiana began a four-game winning streak for the Hawkeyes that suddenly has them getting consideration for the NCAA Tournament. They also own victories at Maryland and at Wisconsin during that stretch to further their case. However, Iowa likely needs to get past the NIT-bound Hoosiers and then win a rematch with the Badgers for the committee to seriously consider putting the Hawkeyes in the field.

This will end up being a throw-away game for the Big Ten tournament. Northwestern already has locked up an NCAA Tournament bid, and even if Ohio State or Rutgers pulls off an upset here, neither of them are running the table in D.C.

The Boilermakers are playing for NCAA Tournament seeding and will have to fend off one of these two desperate teams just to get to the semifinals. A run to the championship game should guarantee them a top-four seed and possibly push them up to the No. 3 line.

No. 4 Minnesota (23-8) vs. Michigan State/Nebraska/Penn State

Richard Pitino will lead the Golden Gophers to the NCAA Tournament – his first appearance as a head coach – after last year’s eight-win disappointment. Minnesota could use at least one victory in D.C. to help its seeding in the Big Dance, but a loss won’t push it out of the field.

The Badgers ended the regular season with a much-needed 66-49 win over Minnesota to snap a three-game losing streak and a stretch during which they dropped five of six. Losing to either Iowa or Indiana could result in Wisconsin slipping down to the No. 5 or even No. 6 line in the NCAA Tournament.

The Terps dropped three of their previous four games before Melo Trimble’s 3-pointer with one second remaining beat Michigan State on Sunday. They’re another team that’s playing for NCAA Tournament seeding and really could use a rematch with Wisconsin in the semifinals to get them on a better line.