What I’m wondering while waiting for this weekend’s games …

How much money is enough? Is any amount ever enough?

Florida’s athletics department had $161 million in revenue during the 2017-18 school year, according to USA Today. That’s a pretty decent amount of coin. Only nine schools in the country made more.

Each university has different ways to accumulate their athletic department riches: media rights/television deals, tickets sold, merchandise sales and donor donations are a few ways. Some schools even manage to receive athletics fees from each student.

With overall attendance decreasing, schools have had to become creative in attracting fans and Florida has offered its fans some unique opportunities – for a price, of course.

Here’s a partial list of what was available for the UT Martin game on Sept. 7:

When I Tweeted this, Clemson fans were quick to point out you can go on the field after every Clemson home game – for free – and sing the alma mater with the team after the game – for free.

Did, I mention, it’s free at Clemson?

But Clemson is one of the rare schools: Fans are allowed on the field after the game, so we shouldn’t frown on other schools trying to cash in where it can. And don’t forget the age-old adage: Every school needs money to make money (and pay for their former coaches’ buyouts).

With the Gators’ home schedule – which, by the way, will feature better and more attractive opponents in the future – I’m surprised they don’t offer even more options. :et fans actually play in the fourth quarter of some of these blowouts if you have some college eligibility remaining? That would be worth at least $10,000, right?

Run on the field to pick up the kicking tee after a kickoff should fetch a few thousand.

Or maybe let some deep-pocketed fans donate $500,000 to call a couple of offensive plays or blitzes on defense? The opportunities to make money are endless. Why not $10,000 for you and three friends to help carry coach Dan Mullen off the field on your shoulders after another win against Tennessee or Vanderbilt? …

Wondering which coaches to fade or follow as underdog? Proceed with caution… but check out Jim Harbaugh, Clay Helton and David Shaw.

First, Harbaugh. Harbaugh has been an underdog six times at Michigan. The Wolverines have lost all six.

Helton’s USC Trojans have been an underdog 13 times. The Trojans lost 12 of those games. In those 13 games as an underdog, USC was only 2-11 against the spread.

However, Shaw has had a great deal of success as an underdog. Against Oregon on Saturday, Stanford will be a home underdog for only the fifth time Shaw. Stanford won the previous four games outright. …

Wondering how the 12 schools that changed/moved to Power 5 conferences between 2011-14 have fared? On Wednesday I ranked the 12 schools based on best winning percentage in their new conference.

So which conference’s new additions combined have been the most and least successful? Let’s take a look.

I guess you’re wondering where last week’s musings/picks column was? Well, the dog ate my homework and/or I had technical difficulties. So let’s catch up.

My picks from two weeks ago went 4-1 and my picks from last week’s Campus Insiders show (Tuesdays at 7 p.m. ET & 9:30 p.m. ET at watchstadium.com/live) – by the way, I highly recommend watching each week for the latest on college football news, notes, scoops and other goodies) – went 3-0.

So now on to this week’s selections:

My picks for this week. Odds from @BetOnline_ag: 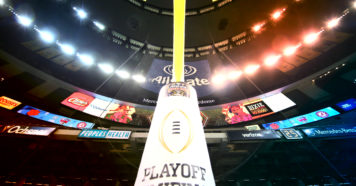