Baseball is a timeless sport with rules and rituals that have spanned more than a century to uphold its spot as America’s pastime. One of the more unlikely traditions that has been ingrained in the game is the innate use of slang, which to many, may sound like baseball babble, but actually has meaning and deep roots in MLB history.

In the latest episode of Baseball Stories, legendary Orioles manager Buck Showalter dropped a number of memorable quotes during his interview with host Jayson Stark, but one line in particular warranted a double take.

“I’ll tell you this, I don’t know if there has been a manager in my lifetime that impacted more other managers’ style than Tony La Russa,” Showalter said when asked about his own mound visits and where he draws influence. “I never saw Tony dry-hump a pitcher.”

You’re probably curious as to what exactly that potentially NSFW phrase means, which is why we went ahead and Googled it in an attempt to save you from an awkward meeting with your human resources manager.

Dry humping (v.) – Term used when coach tells you to get warmed up to go in the game… and then you never go in.

But that’s just the beginning.

There are plenty of other unorthodox baseball terms that the average fan might not know the meaning of. This handy glossary of ridiculous jargon will either turn you into a trivia superstar at your local watering hole or make you miserable to sit by during a game at the ballpark.

Banjo Hitter: The term is used to describe a batter who lacks power at the plate and usually has a low slugging percentage. The banjo-like twanging sound that comes from a ball hitting a bat is the inspiration for the name.

Bush League: Besides being one of Ron Burgundy’s favorite insults in “Anchorman”, it’s a well-known adjective that Merriam-Webster defines as “marked by a lack of sophistication or professionalism”. The term’s origin can be traced back to the early 20th century, when it was used as an unflattering synonym for the minor leagues.

Butcher Boy: A hitting strategy where the batter will show a bunt, pull back when the pitcher begins the delivery, and then take a quick swing. It’s a common tactic employed by pitchers, most notably Baseball Hall of Famer Greg Maddux.

Can of Corn: An easy-to-catch fly ball that’s hit to an outfielder. There are many theories regarding the origin of this term, but MLB.com claims that it’s inspired by 19th-century clerks at grocery and general stores using long, hooked sticks to pull down canned goods from high shelves and then catching the cans in their aprons like a fly ball.

Cup of Coffee: If you’re a baseball prospect who just got called up to play in the majors, you do NOT want to be associated with this phrase. Players were given this nickname if they were on a pro team for such a short period of time that they barely had time to enjoy a cup of coffee.

Duck Snort: The term, popularized by White Sox announcer Ken “Hawk” Harrelson, describes a ball that goes over the infielders’ heads and lands in the outfield for a hit. It was originally coined a “duck fart” off of the idea that duck flatulence is muffled and soft (like the hit) due to its feathers, but was altered to be more family friendly.

Golden Sombrero: In hockey, a hat trick is when a player scores three goals in a single game. Keeping that in mind, former Padres OF Carmelo Martinez decided that the act of striking out four times in a game deserved to be recognized with the help of a bigger, and flashier, hat; hence the birth of the golden sombrero.

Guitar Hero: Former Tigers pitcher Joel Zumaya had to be benched during a playoff game back in 2006 due to inflammation in his right arm. The cause of the injury? Zumaya was shredding too hard while playing Guitar Hero. Honestly, “guitar hero” is never used as slang in the majors, but it was hard to miss out on a prime opportunity to bring up one of the funniest baseball injuries of all time.

Marlins Man: An urban legend passed down from generation to generation, who was recently said to be haunting the backstop at Marlins Park. Rumor has it that Derek Jeter’s tanking has freed the orange apparition from South Beach, and he’s now looking for a new MLB team to torment.

Mendoza Line: Named after former Mariners infielder Mario Mendoza, the Mendoza Line is an underwhelming .200 batting average. Though Mendoza is the namesake for the threshold of terrible batting, he actually retired as a .215 hitter.

Seeing-eye Single: A softly hit grounder that perfectly travels between infielders for a base hit. The “seeing-eye” aspect of the name is a reference to the ball appearing to see where it precisely needs to go in order for the hitter to get on base.

Texas Leaguer: In 1901, Cleveland Blues OF Ollie Pickering was called up from the Texas League and preceded to hit bloop singles in each of his first seven plate appearances. The rookie’s teammates started calling a bloop single a “Texas Leaguer” in honor of Pickering, and the name stuck.

Took the Collar: If Giancarlo Stanton “took the collar,” it means that he went hitless. Why a collar? Because it resembles a zero. Why Stanton as the example? Because he’s been “taking the collar” a lot as a Bronx Bomber.

Tools of Ignorance: A clever nickname for a catcher’s equipment coined by former World Series champion Herold “Muddy” Ruel. Ruel found it ironic that a player who was intelligent enough to thrive at the catcher position would be willing to put their body on the line for a position that requires so much safety gear.

Worm Killer: A (usually) off-speed pitch that hits the ground before it reaches home plate, “killing” any worms that would be hanging out at the dish. Can’t imagine PETA is a fan of this one. 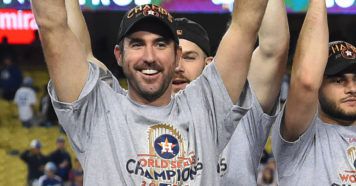 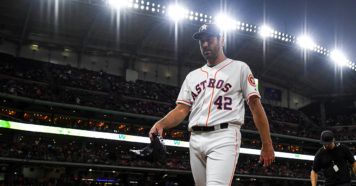 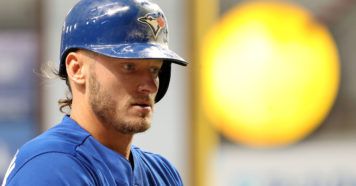