North Carolina, Kentucky, UCLA … and Butler. The Bulldogs might not have the rich history the other three programs boast, but they’re going to be just as tough to beat.

One of my favorite Seinfeld episodes features Jerry wondering if he’s actually invited to Tim Whatley’s day-after-Thanksgiving party. He’s asking his friends questions and trying to decode Whatley’s discussion with Elaine before eventually asking Kramer if he can just tag along with him.

“How am I gonna feel when I show up with some uninvited, unwelcome intruder?” Kramer responds to Jerry. “I can’t be aiding and abetting some party-crasher!”

Butler represents Jerry, only it is crashing this year’s South Regional in Memphis. North Carolina, Kentucky and UCLA represent Kramer, the always-invited glitterati with their flashy jewelry, expensive suits and fancy cars that make the normal-looking folk pop their eyes open in amazement, wishing they could be a part of it all.

Those three college basketball blue-bloods are in for a rude awakening if they give the cold shoulder these blue-collar Bulldogs, though. Roy Williams understands as much as his top-seeded Tar Heels prepare to face Butler on Friday night in the Sweet 16.

“(We) got in (Wednesday) and (someone) said, ‘Man, what a great regional. North Carolina, UCLA and Kentucky,’ and he paused, and I said, ‘And Butler,’ Williams recalled. “We’re 0-2 against those guys, so they’re pretty doggone good, too.”

Indeed the Bulldogs have scored victories over the mighty Tar Heels in recent years, and both times were on neutral floors. They won 82-71 at the 2012 Maui Invitational and 74-66 two years later at the Battle 4 Atlantis tournament. But Friday’s meeting will be the biggest yet.

This is Butler coach Chris Holtmann’s first time in the Sweet 16. In fact, it’s the first season in his head-coaching career he’s lost fewer than 11 games. And just because he’s beaten a Hall of Fame coach before doesn’t mean he’s guaranteed to do it again.

It’s not exactly walking into a gala wearing a T-shirt, although it’s close. What Butler has going for it, though, is its own tradition of being overlooked and upsetting programs previously deemed superior.

The Bulldogs have beaten North Carolina, Indiana and Purdue multiple times over the past five years, with wins over Arizona and other Power Five teams thrown in. Former coach Brad Stevens guided them to back-to-back national title games in 2010 and ’11 going through the likes of Michigan State, Syracuse, Florida and Wisconsin to get there.

That history – and Holtmann’s own having beaten the Tar Heels previously – is a reason why Williams hasn’t gotten caught up in the all-blue-blood-regional talk. UCLA vs. Kentucky at the same site? It can wait.

“The names that are here with North Carolina, Kentucky, UCLA, the number of championships, the number of wins, does make it a little unusual,” Williams said. “But I happen to think right now Butler is better than any of them, and that’s the team we’re getting ready to play.”

The Bulldogs certainly aren’t in awe of North Carolina, just like they won’t be if they advance to the Elite Eight and have to face Kentucky or UCLA to get to the Final Four. They’re here on a business trip, and they certainly don’t care of they’re crashing the party.

“This year has been successful for our team,” Butler junior forward Kelan Martin said. “We had a bunch of ups and downs in conference play, but we overcame those and then just stuck together. 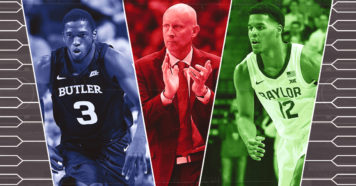 With losses by Duke and Butler, there’s a new No. 1 overall seed.

An Updated Look at the Likely NCAA Tournament Bracket

Illinois is on the uptick, Baylor is the top team and Dayton could be stuck on the four line.