BYU vs. UMass prediction and game preview. Projecting who wins the game between the Cougars and Minutemen.

UMass and BYU meet for the first time ever in a matchup of teams without a conference affiliation. It’s been an up-and-down year for the Cougars and first-year head coach Kalani Sitake, but the team has been playing better of late. In fact, BYU has won five of their last six, losing only by one point at Boise State and achieving bowl-eligibility with last Saturday’s rout of Southern Utah. For the 2-8 Minutemen, their next two games in Provo and Hawaii can be approached like quasi-bowl trips at the tail end of another challenging year. Mark Whipple’s crew hasn’t beaten an FBS opponent since hosting Florida International in Week 3.

What To Know About BYU

In many respects, it’s been a typical year in Provo—plenty of close and exciting games and no shortage of physicality on both sides of the ball. Even as star back Jamaal Williams tries to battle back from injury, the Cougars will lean heavily on the ground game to support the hit-or-miss passing of veteran quarterback Taysom Hill. Freshman KJ Hall led the way with 59 yards and a touchdown in last week’s win. On defense, BYU made strides throughout October, led by the linebacker trio of Fred Warner, Francis Bernard and Butch Pau’u. The team also has 16 interceptions to tie for No. 5 in the country.

The glimmer of hope in Amherst comes from an offense that has been able to move the ball with a collection of Minutemen that have eligibility beyond 2016. Sophomore quarterback Andrew Ford has thrown 22 touchdown passes, running back Marquis Young averages 74 yards a game, and wideout Andy Isabella and tight end Adam Breneman, a Penn State import, are productive targets in the passing game. Unfortunately, UMass needs to be prolific with the ball, because an overmatched defense is giving up 33 points per game and over six yards per play.

Offense: BYU. The physicality of the Cougar ground game and UMass’ problems at the point of attack tip the scales in favor of the home team.

Defense: BYU. The Cougars are tougher against the run and more opportunistic, though Minutemen Steve Casali and Da’Sean Downey are active from the second level.

Special Teams: BYU. Rhett Almond has been perfect inside 40 and Aussie punter Jonny Linehan averages more than 40 yards per punt.

Coaching: Massachusetts. Whipple is an unheralded coach with deep roots and a solid track record of success in the Northeast.

Intangibles: BYU. Neither team has much at stake at this point, but the Cougars have been solid at home, winning their last three in Provo.

Ford’s biggest impediment to success this season has been the inconsistency of his O-line, which has surrendered 36 sacks. Life won’t get any easier versus Tautu and the rest of the Cougar defenders who play hard and fast at all times.

UMass is capable of landing a few early shots with Ford and his underrated supporting cast. But it won’t be nearly enough to offset the edge in physically BYU will enjoy on both sides of the ball. The Cougars will repeatedly hammer the soft Minutemen front, with or without the services of Williams, while the defense continuously harasses Ford, who’s thrown a dozen picks, into forced errors, hurried throws and turnovers that end drives. 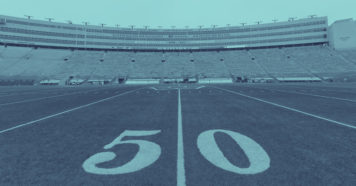 “We feel we have been neglected by the NCAA in terms of wealth over health.”

“A Group of Five league canceling would make our presidents more nervous in an already nerve-racking time.”