CAA Basketball Coaches Rank the Best Jobs in the Conference

This is how polling in the CAA shook out among coaches who voted, with one being the best and 10 being the worst: 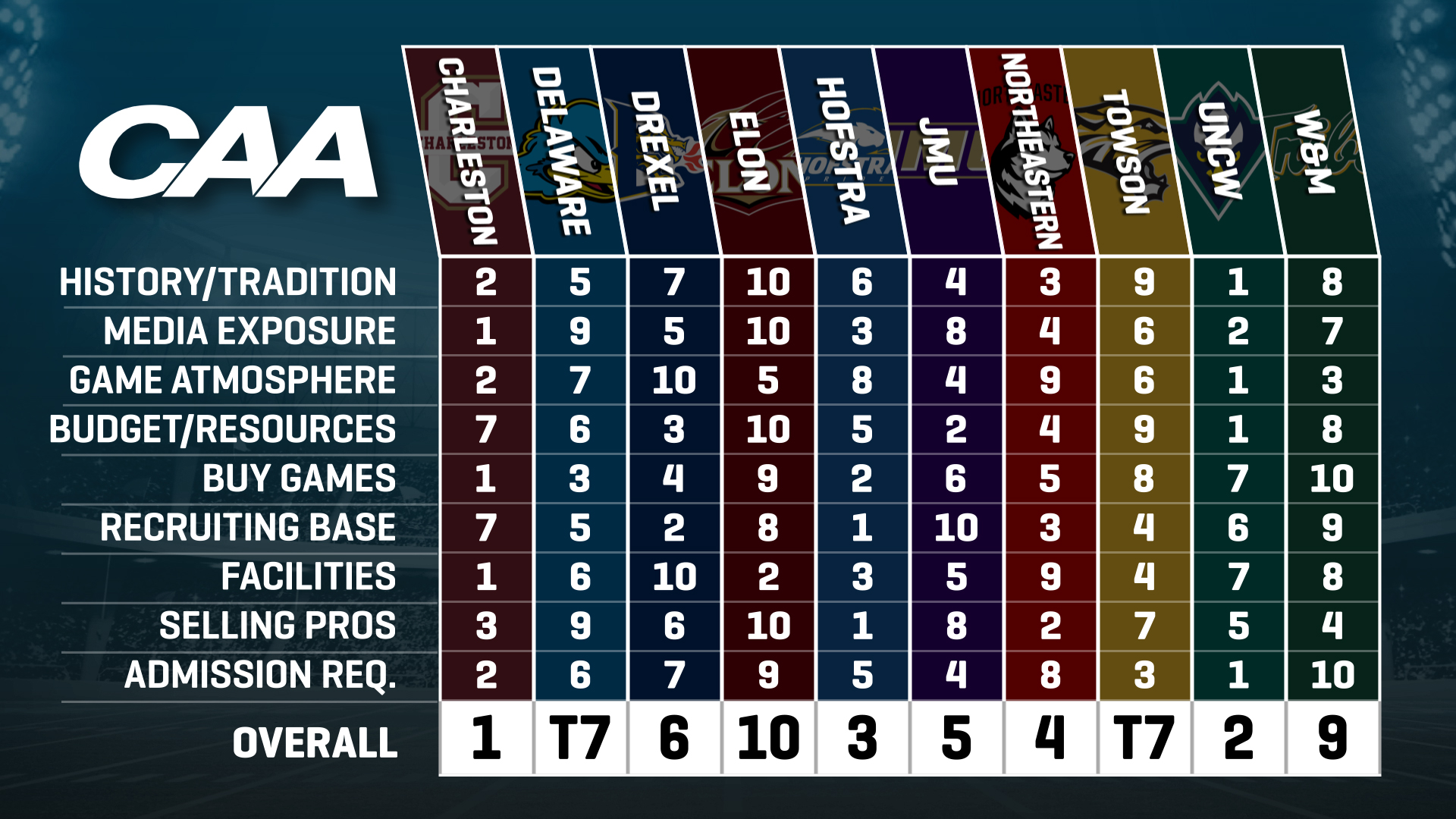 1. Charleston (73) – The program has been to five NCAA tournaments, with the latest coming this past season. Charleston made the move to Division 1 in 1991, and joined the SoCon in 1998 before moving to the CAA in 2013. It’s considered the best job in the league due to tradition, atmosphere, facilities and much more.

The knock: “As good as the location and the city are, at times the weather can be a distraction because there are so many others things to do.” – CAA assistant coach

The knock: “Facilities are good, but there are better in the league. The same can be said for the recruiting base. It’s solid, but not in the top three or four of the league.” – CAA assistant coach

3. Hofstra (65) – The Pride have gone to the NCAA tourney four times, but they haven’t been since 2001 when they made back-to-back appearances under Jay Wright. The two other times came back in the 1970’s, when Roger Gaeckler was running the program. The biggest advantage for Hofstra is the wealth of mid-major players in the area.

Where they win: “New York. There are tons of players in the area, especially guys that can play at this level. Hofstra also has great facilities – including a new practice facility.” – CAA assistant coach

The knock: “New York has a lot of talent, but it’s not easy dealing with all the bullshit surrounding kids in New York. Plus, so many of them get over-recruited, and now a lot of them are leaving to go to prep schools.” – CAA assistant coach

4. Northeastern (52) – The Huskies have made eight NCAA tournament appearances – most recently in 2015 under current coach Bill Coen. Jim Calhoun took Northeastern five times in a six-year span from 1981 to 1986 and Karl Fogel was the helm in 1987 and 1991. The program can also sell pros like the late Reggie Lewis and current NBA guard Jose Juan Barea.

Where they win: “The city of Boston. It’s a great city, and Northeastern has the advantage of being able to recruit the prep schools and in the New England area.” – CAA head coach

The knock: “The facilities are old and outdated, and people just don’t care about Northeastern basketball with so many other things going on in Boston. It’s a pro sports town.” – CAA assistant coach

Where they win: They have a passionate fan base, and have a new arena coming in 2020. They support the program.” – CAA assistant coach

The knock: “Campus isn’t that easy to get to. It’s two hours from any major airport, 2-3 hours from any recruiting base. And the administration has unrealistic expectations for men’s basketball.” – CAA assistant coach

Where they win: “The administration gets it, and they have the resources to succeed. One of the best things about the job is the proximity to players.” – CAA assistant coach

The knock: “Facilities. The DAC is what it is. It’s the worst arena in the league.” – CAA head coach

T7. Delaware (43) – Steve Steinwedel took the Blue Hens to the NCAA tourney back in 1992 and 1993 and Mike Brey went with the program in 1998 and 1999. Since Delaware went into the CAA in 2001, there have been just a handful of seasons with at least a .500 overall record. David Henderson struggled in his tenure, Monte Ross had a good three-year stretch from 2011-2014, but the other seven were fairly forgettable. Delaware ranks towards the middle of the league in most of the categories.

Where they win: “Pretty good location and facilities, and a solid recruiting base. But the best selling point? Definitely that it’s the number one party school in the country.” – CAA assistant

The knock: “No real tradition, at least not in a long time. They have been to the tourney just once in the last 19 years.” – CAA head coach

Where they win: “The location and the arena. There are tons of players in the area, and the arena is awesome. But that’s about it.” – CAA assistant coach

The knock: “The resources are bad, really bad – and the program has no real tradition.” – CAA head coach

Where they win: “They have a niche in recruiting because they go after academic kids. They can sell academics.” – CAA assistant coach

The knock: “While the academics are a blessing, they can also be a curse. They can’t get a large segment of players into school.” – CAA head coach

10. Elon (26) – The program went from the Big South to the SoCon in 2003, and into the CAA in 2014. Elon ranks dead last in four categories, and second to the bottom in two others. Matt Matheny has done a nice job in his four years in the league, and the Phoenix finished 10-8 in the CAA two years ago.

Where they win: “They have a new arena and an administration and a community that gets it.” – CAA head coach

The knock: “There’s no history, and they are the worst in the league in terms of spending. It’s the toughest job in the league. Clearly.” – CAA assistant