Given that we’re now in March with the greatest tournament in all of sports set to begin this week, it only felt right to come up with a creative way to compare uniforms of the four major sports across the college athletics landscape: baseball, basketball, football and hockey. All present some great uniforms, some of which are recognizable to even the most casual sports fans. Instead of simply ranking the best uniforms in college sports, we have decided to create a “tournament” that follows the same structure as the NCAA Tournament.

Sixteen teams/uniforms (one specific uniform for each seed) from each of the four previously mentioned sports were carefully selected to represent their sport in a 64-team, March Madness-style bracket tournament. Each sport (or “region”) has 16 uniforms seeded 1-16, with the top seed playing the bottom seed, second playing fifteenth, and so on. To determine the winner of each matchup, we opened it up to a vote here within the Campus Insiders’ world headquarters. The leading vote getter in each match advances to the next round, until we’re left with a Final Four of one team from each of the four sports. We will be releasing the results of one sport of the bracket per day. In case of a tie in any of the voting, your #FashionInsider has the deciding vote.

So with that, let’s get started. Leading off the tournament is football.

The Tigers of Louisiana State came into this tournament with the top seed in the football region. Their uniform combination of the yellow helmet, white jersey, and yellow pants is the definition perfection in college football.

At No. 16 we have the white ‘Rough Rider’ uniform set worn by the Sooners this past season. While still one of the best uniforms we saw in the 2016 season, it was no match for our top seed.

Utah has one of my personal favorite all around uniform sets. On any given Saturday, the Utes are sure to look good when they take the field. Their combination of the white lid with their red jersey and pants is no doubt one of the better looks in college football.

As for Clemson, their orange on orange on orange combo got even better this past season when they added the white tiger paw prints to their shoulders. That all-orange combination is so distinctive and eye catching that once you see it, you don’t forget it. This held true in our voting.

The 5-12 matchup in the NCAA tournament always happens to be intriguing because of the potential for upsets. For whatever reason, that showdown is consistently more competitive than the seeding would have you believe. This matchup is no different.

Michigan, with their classic helmets, got a big boost when they switched from adidas to the Nike Jumpman brand prior to this past season. Not to knock on adidas, but they veered too far off path with the Wolverines’ uniforms in recent years. Nike and the Jumpman brand put Michigan back on track, leading to their spot as the No. 5 uniform in this region.

Our No. 12 seed Pitt, who may have been slightly under-seeded, broke out one of the best throwback uniforms we’ve seen in quite some time when they returned to their old yellow and royal blue colors. The uniform combination is simple and easy on the eyes all at once, leading to our first big upset in this Tournament of Uniforms.

I, for one, am a big fan on the Gamecocks’ all black uniform with the matte black, triple-striped lid. It’s a clean cut, modern uniform with no B.S. or other gimmicks, while also presenting an intimidating appearance.

Stanford, on the other hand, maintains more of a classic look with its home uniform. While brands have changed and updates have been made here and there over the years, Stanford still looks relatively similar to how they did back in previous decades. This may have had an influence in our voting, as the Cardinal pulled off another upset.

Iowa’s home uniform is, without question, one of the best in the land. That yellow and black combo is phenomenal, and the black helmet with the yellow Hawkeye logo is something special. It may be one of the game’s more underrated uniforms.

Then we’ve got Colorado and its gold helmet, black jersey, and gold pants. Who can’t help but think of the mid-90’s Buffalo squads when looking at these beauties?

First off, all of Florida’s uniform combos are above average. The color scheme that they use is right up there with the best in the nation, and they know how to implement that into their uniforms (not just in football). But their single best look is the orange “Gators” helmet with their blue jersey and orange pants. The blue top sandwiched between the two oranges is sensational and really pops out at you.

Air Force debuted their Airpower Legacy alternates this past fall and instantly gained national attention for it. Their sharktooth helmets, which represent the paintings often found on certain fighter planes since WWII, were THE best helmets we’ve seen. That is not up for debate. The jerseys themselves, however, didn’t quite live up to the same hype. Since the voting for this matchup ended in a 4-4 tie, I determined that jerseys hold the Falcons back just a bit too much to take home the victory.

Miami came out with a new set of primary uniforms during the 2016 season and nailed it. Both the home and away sets are great, but the orange home top with the white lid and white pants took the cake. Adidas really found something to build off of with these.

Here’s our first all-white uniform. Texas owns one of football’s most iconic looks, both at home and on the road. While the home unis are nice, the icy road whites are some next-level stuff. These rankings would have been incomplete without them. Yet having said that …

Anyone who pays attention to sports knows when they’re looking at an Ohio State football helmet despite the fact that there is no logo on it. That says something to me. The Buckeyes own an iconic uniform that I would rank among the best in all sports (professional and non-professional).

Army decided to step up their uniform game for their big showdown with Navy this past December, and they struck gold. Rather than trying to come up with some new, flashy concept, they decided to pay tribute to the 82nd Airborne Division from WWII. Their helmets were the strongest aspect of the uniform, as they have a faded mesh pattern to simulate the netting worn on many helmets during World War Two. This may have played a big role in our largest upset of the region. 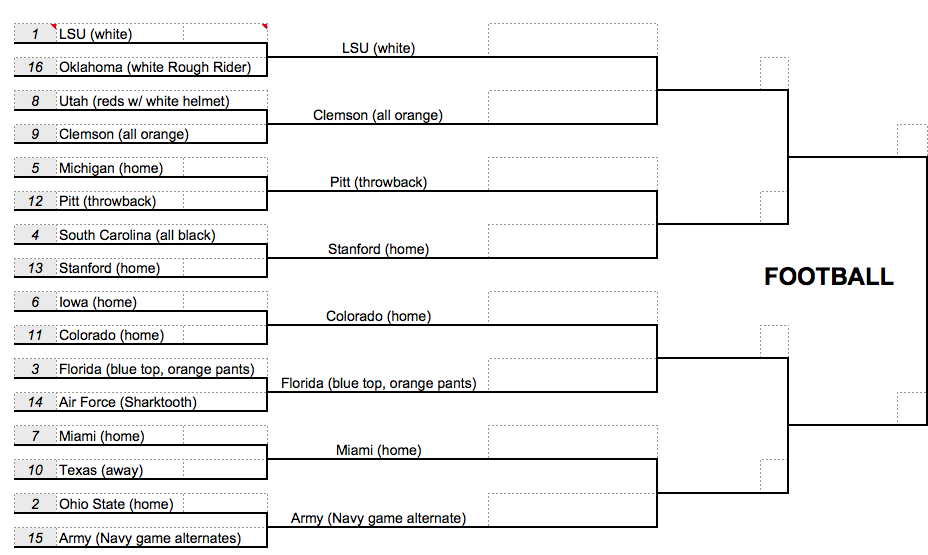