It’s Day 2 of our Campus Insiders Tournament of Uniforms, meaning we’re now shifting our focus from the football field to the baseball diamond. I think anyone living in a cold weather state is ready for some warm temperatures and sunshine, right? Well, what better way to fulfill those desires than by thinking about America’s pastime? After all, the college baseball season is already well underway, and the MLB season begins in less than a month. Summer is right around the corner folks, I promise!

Without further ado, let’s take a look at how our voting results ended up in the baseball region of our bracket.

No. 1 Florida State vs. No. 16 Southern Illinois

Leading off, we’ve got the Seminoles versus the Salukis. Florida State’s red/maroon tops with “Seminoles” spelled out across the chest are flawless in these eyes. The gold mixed in with FSU’s red is a fantastic combination. Add in the white trimming and the Seminoles’ logo on the right sleeve, and yeah. I’m not sure these will be beat.

Southern Illinois has not quite enjoyed the success on the field that they became used to in past decades, but they’re no pushover. Neither are their uniforms. Their black hats and jerseys on top of those white pants is a nice, clean look. Their own maroon color fits in nicely with the black and white. That being said, they were no match for FSU.

No. 8 Mississippi State vs. No. 9 North Carolina

Coming in as our No. 8 seed are the Bulldogs of Mississippi State and their new adidas Heritage uniform. This spring, adidas came out with special uniforms for select programs, and they hit the bullseye with MSU’s. The cursive font on the front with the maroon pinstripes gives off a bit of an old-time feel, which I personally love.

Then, one of our more unique uniforms belongs to North Carolina. Normally I’m not a fan of full color uniforms like the ones representing the Tar Heels here, but these are an exception. There’s just something about that blue mixed with navy blue and white that makes these things work. The font they use doesn’t hurt either.

I absolutely love what we’ve got going on here with both uniforms. First, we have a stellar orange pullover with Oklahoma State. The baseball bat across the chest is quite unique and was a great idea by somebody. It literally makes this jersey work. Not to mention the black and white striping on the sleeves and collar.

Moving on to Vanderbilt, that uniform set just screams “vintage” when I look at it. The cream-ish color and the black, cursive font create such a simplistic vibe. Just another example of my “less is better” theory when it comes to uniforms.

I’ve always been a big fan of the Baltimore Orioles’ uniforms, so maybe that’s why I’m so high on Oregon State here. The font that they use to spell out “Beavers” is what completes the jersey, while the black and white hat just adds icing on the cake. Do not mess with these, OSU.

Kentucky shows up in our bracket with a pretty common uniform design. Nothing flashy about the font used or the color scheme. Just a basic, crisp baseball uniform. What separates it from other similar uniforms are the colors used by Kentucky. Their blue and white mixed with a primarily black jersey creates a noticeable appearance. But, it wasn’t quite good enough to pull off the upset.

Purple is one of the more under-appreciated colors in sports. That is a fact. It goes well with only a few other colors like yellow, black and/or white, but when they’re put together magic tends to happen. LSU’s purple jersey and white pants are a perfect example. The Tigers have many different uniform combinations, but this is the best of the bunch.

Is it 1976 again? Pepperdine took a page out of the Houston Astros’ book to create these beauties, and man was that a quality decision on their part. Many teams have tried to replicate the Astros’ look of the late ’70s and early to mid-’80s, but not all have successfully pulled it off. That’s not the case here, which brings us to our first upset of the region.

No. 3 Washington State vs. No. 14 Virginia Tech

I’ll be honest with you here. I don’t really have a favorite between these two. On the one hand we have a new Washington State pullover uniform with red and gray/silver fonts and striping.

On the other hand, we’ve got our second orange pullover with the script “Hokies” across the chest spelled out in maroon with a white stroke.

Both of these are strong contenders and are worthy of advancing in the bracket. That is evidenced by the fact that my colleagues came to a split decision when voting on these two. Now, given that in the case of a voting tie I have the deciding vote, I’m going to go with …

There’s nothing flashy or out of the ordinary with either uniform in this matchup. Arizona is rocking their typical navy and red top with the pinstriped pants and blue hat. This is always a good look, and what ain’t broken doesn’t need fixing.

TCU debuted these specific black tops this season, and they’re not bad. They’re not great though, either. Had they added some white trimming to the jersey, maybe they move up a notch in our seeding. Since this match ended in another tie, my decision ultimately was made due to the fact that I’m a sucker for pinstripes.

Do I really need to sit here and explain why the Sun Devils are our No. 2 seed? Just take one look at what they’re wearing, and you should get a good idea.

Louisville came in pretty strong with the white hat and white vest with black underneath, and they’d beat a lot of other schools with this look. But in this instance, there’s no contest. 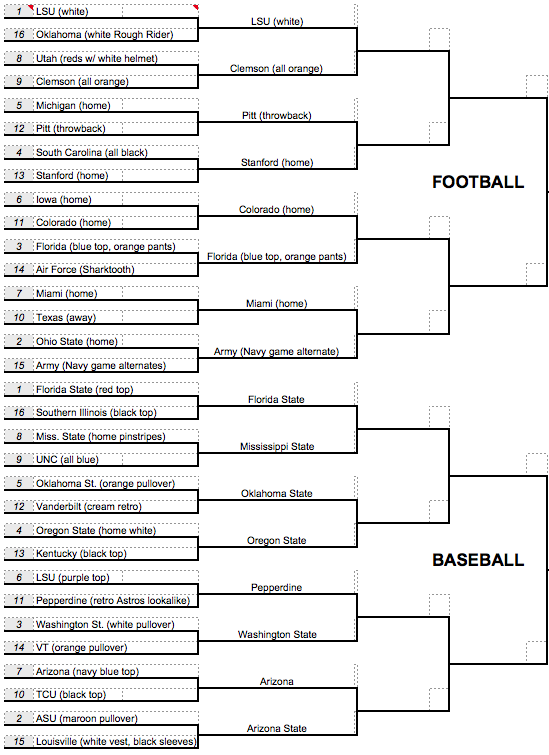 MORE: College Football Uniforms – Round One