The NCAA men’s basketball tournament is finally underway! I think I speak for much of America when I say that today and tomorrow are, without question, two of the greatest days of the year. Endless basketball with lots and lots of money on the line, not that I would ever take part in any of that …

It’s also D-Day for our Basketball Region voting (I’ll let you decide which is the bigger deal). In an attempt to keep your anticipation and excitement levels from reaching dangerous levels, I’ll get straight to it here.

We’ve got Nike vs. Nike here with Duke and Oregon. Duke and their classic blues took the No. 1 spot in the region, and rightfully so. Those things are beautiful. I don’t like when the Devils mess around with their black or darker blue uniforms. These are what they should wear during every single road game. End of story.

As for the Ducks, you’d be right to expect one of their “out there” uniforms to be in here. And even though the ones represented above aren’t that exotic, they’re still different than most teams in the country. Their specific green is unique to the rest of the NCAA, and it almost put them over the top for a massive upset in this first round matchup. The CI voters turned in a split decision, meaning yours truly had the deciding vote.

No. 8 North Carolina vs. No. 9 Louisville

Here we’ve got an ACC showdown. North Carolina comes in repping their Carolina Blues, which have to be considered one of the sport’s all-time greatest, most recognizable looks. My one knock on these are the unnecessarily thin shoulder seams. They look more like a tank tops than actual basketball jerseys.

Louisville broke out some sick adidas throwbacks this season, and man was that a wise decision. I love the black uniform with cream and red mixed in there along with a vintage Cardinals logo on the shorts. Louisville would be smart to bring these back again in the future.

Like our first matchup, we had another tie in voting here, meaning I was forced to take control of the situation yet again. I will now hide under my desk with the fear of my editor, Jon (a UNC diehard), coming at me with all of his rage.

I’ll be upfront with you here. This one wasn’t even close, and rightfully so. I do have one request, however. Illinois, PLEASE make these your permanent home uniforms.

The No. 4 seed in the Basketball Region is none other than the Arizona Wildcats and their “Twilight” red uniforms. These things are pretty sweet. The fading of navy blue to red along the chest and near the knees is a completely new design that I don’t remember seeing in college basketball. That, and the shade of red that the Wildcats use makes these tough to topple.

Kentucky also switched up there unis this season by adding the blue and white checker pattern down the sides of the jersey and shorts. While these are no pushover, they just don’t compare to what we’ve got going on in Tucson.

The Hurricanes use one of my favorite color combos in the nation. I’m not simply talking about green and orange, but rather the specific shades of green and orange used by Miami. There’s just something about those two when put together that clicks. Couple that with their exclusive font, and they’ve got a solid look going on.

I’d have felt bad for my co-worker, Brian, if I didn’t sneak the Tigers in here somehow. It helps that their orange uniforms are actually good, but are they good enough to take down Miami for an upset? No.

I made a prediction before opening this region up for voting that this would be a tight race, and I was right: it wound up being a deadlock between ‘Nova and FSU. First off, I really like the fact that the Wildcats went with somewhat of a throwback look at times this season. They’re a perfect compliment to their primary uniforms, which are by no means bad in their own right.

Secondly, Florida State has one of the more interesting looks from this past season. The Seminoles’ feather pattern occupying the sides of their tops and shorts create a very interesting and distinct look that no other program can replicate. That and their color scheme are why the Seminoles made the top 16 in our basketball uniforms.

This is by far my favorite showdown in the region. Two timeless uniforms for two of the most storied programs in college basketball history. With UCLA, we’ve got their blue road set with the yellow font and trimming. The specific blue and yellow used by the Bruins is exclusive to them in college basketball, and rightfully so. It’s a phenomenal pair of colors that pops off the screen.

Indiana owns one of the more basic looks in this region. Nothing flashy about their home whites whatsoever. That said, they don’t look bad at all. I will admit, however, that the simplicity and historical significance of these uniforms are what put them into this tournament. Our voters were apparently having none of what the Hoosiers were selling.

I’m not going to lie. Kansas could have been our No. 1 seed over Duke. It really became a toss-up between the two to decide the top seed. Ultimately Duke won that battle, but just barely. I’ll let the Jayhawks’ uniforms speak for themselves.

At No. 15 are the Wildcats of Northwestern, who are taking part in the NCAA Tournament for the first time in their history. I really like the purple and white color combo, but the font sized used to spell out “Northwestern” across the chest is way too small. Had they found a way to fix that, maybe they end up as a higher seed. 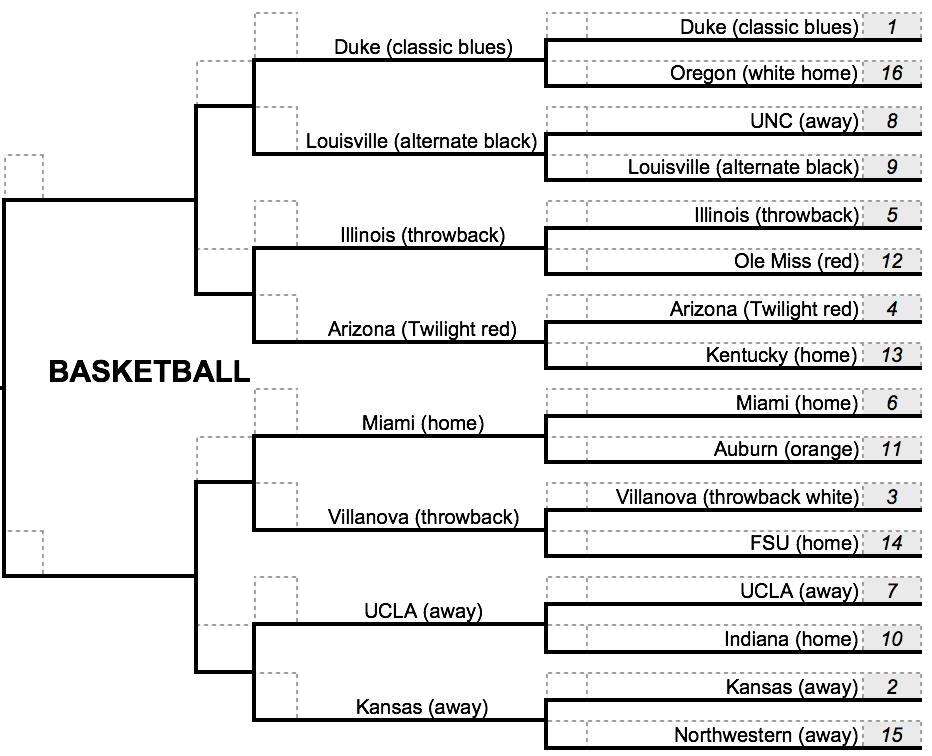