USF’s hiring of Charlie Strong and FAU’s hiring of Lane Kiffin will impact recruiting in the state of Florida in a big way.

Teddy Bridgewater, Calvin Pryor and Brandon Radcliff highlighted the prospects Charlie Strong was able to lure from the state of Florida to Louisville when he was the head coach of the Cardinals.

They, along with some non-Florida prospects, helped elevate Strong’s resume as an elite recruiter, one that was already well-respected going back to his days with the Florida Gators.

Even with the Longhorns, Strong persuaded highly touted players to come and play for him. From 2014 to 2016, he led Texas to the Nos. 15, 7 and 3 recruiting classes, respectively.

Now Strong finds himself back in the Sunshine State, having accepted an offer to become South Florida’s next head football coach. Strong replaces Willie Taggart, who left to become Oregon’s head coach, and his hiring could spell trouble for those who are currently recruiting in the state of Florida.

Strong was able to bring kids from all over Florida up to Louisville — with a focus on the Miami area — with 34 commitments from Floridian prospects from 2010 to 2013. Imagine how much easier it will be for him to recruit in Tampa. 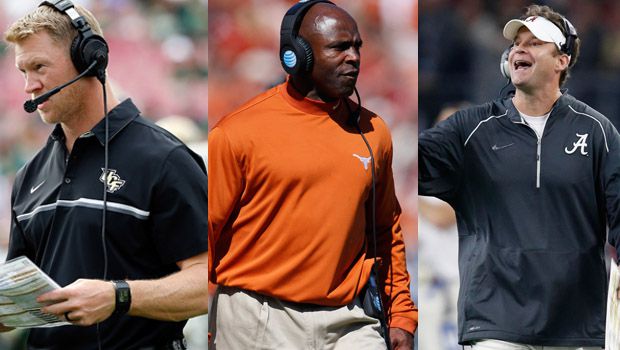 Right now, Florida State, Florida and Miami all sit comfortably within the top-25 recruiting class rankings. But with Strong running with the Bulls, the jobs of Jimbo Fisher, Jim McElwain and Mark Richt just got a lot harder.

There’s a reason why Strong is able to recruit at a high level. He’s genuine. He cares about his players, sincerely wants them do develop on and away from the field, and he lays it on the line for them whenever he can because that’s what a leader is supposed to do. Sure, his tenure with Texas didn’t end well, but it wasn’t due to any recruiting deficiencies.

He could easily take the progress USF had with Taggart and elevate the Bulls to another level within his first two full recruiting cycles.

On Monday, roughly 24 hours after USF announced Strong’s hiring, FAU finalized talks with Lane Kiffin to be its next head coach.

As impressive as Strong’s recruiting resume is, Kiffin isn’t exactly lacking in marquee recruiting pulls. When he took over the Trojans in early 2010, he held on and helped USC finish with the No. 6 class in the nation. Kiffin secured signatures from 12 5-star recruits while serving as USC’s head coach, reeling in future NFL players like Robert Woods, Marqise Lee, Cody Kessler, Leonard Williams, Nelson Agholor, Max Tuerk and Su’a Cravens.

And then there were the talented players he helped recruit for the Trojans while serving as an assistant under Pete Carroll. Kiffin was around for the Matt Leinart-Reggie Bush-LenDale White years.

Two high-profile hirings in such a short order have only further muddled what is now, definitively, America’s most competitive recruiting landscape.

Last month, FIU hired Butch Davis as its new head coach. When Davis was leading the Hurricanes from 1995 to 2000, he landed future NFL stars like Ed Reed, Andre Johnson, Clinton Portis, Edgerrin James, Reggie Wayne and Jeremy Shockey, en route to reestablishing Miami as The U.

Even though Davis hasn’t been a head coach since 2010 when his run with North Carolina ended, he has a proven track record on the recruiting trail and possesses ties to South Florida dating back to his time on Jimmy Johnson’s Hurricanes staff in the 1980s. 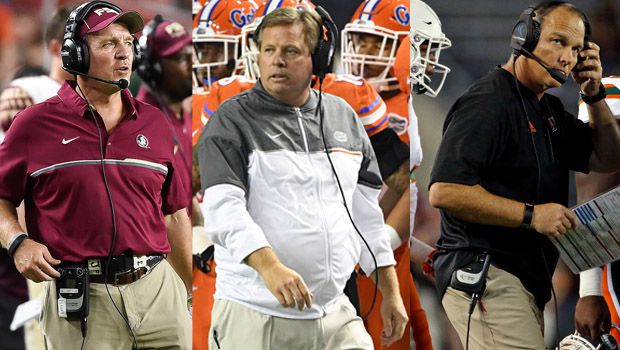 Let us also not forget about Scott Frost. UCF finished 6-6 in his first season as head coach and reached the Cure Bowl one year removed from an 0-12 campaign. The head coach of the Knights is a name on the rise and has worked with some talented players (see: Marcus Mariota, Royce Freeman, De’Anthony Thomas, etc.), whom he can sell recruits on.

Fisher, McElwain and Richt, who lead the state’s three premier programs, will be going up against the likes of Davis, Frost, Kiffin and Strong at perceived second-tier schools.

It will be anarchy … albeit more like an “Oh, my God, this is awesome,” uptick in trolling messages boards and Twitter for recruiting battles kind of anarchy.

More importantly, it will affect the way Fisher, McElwain and Richt recruit overall. It adds more weight to the recruits they go after outside the state, in the pipelines where they’ve found success.

For Fisher, it means hitting a few more home runs on players out of the Virginia Beach area. McElwain may dig a little deeper into Nick Saban’s backyard in Alabama. And Richt could return to his old stomping grounds in Georgia a little more than he had previously anticipated.

It also shouldn’t be lost in the shuffle that the hirings of Strong and Kiffin affect programs outside the Sunshine State. While coaches like Jim Harbaugh, Urban Meyer and Dabo Swinney can certainly recruit their tails off and develop players, there is less of a need for Floridian recruits to stray too far away from home now.

Sure, some recruits will leave. But, hey, you want to compete for SEC titles? Florida has gone to Atlanta two years in a row. You want to bring the swagger back to The U? Richt is refreshing that program. Fisher has a national title. Both he and Frost have coached Heisman Trophy winners, who went on to be the Nos. 1 and 2 overall picks in the NFL Draft.

Davis, Kiffin, Strong and everyone else on that in-state list can put your name on the back of an NFL jersey. So, it may not turn Florida into a barren pipeline for the usual customers who pluck talented players out of the state, but it will certainly make the process more difficult than it has ever been.

This doesn’t mean FAU, FIU, UCF and USF are going to dominate the recruiting rankings and finish above the state’s three members of the Power Five, but it does mean more competition than Florida, FSU and Miami would like to see.

It also means programs within the state of Florida will have an easier time organically locking down the borders from carpetbaggers, thus insulating one of the country’s top talent hotbeds.