A whopping 88 percent of Football Bowl Subdivision (FBS) athletic directors want an expanded College Football Playoff when the current playoff contract ends after the 2025 regular season, according to a survey conducted by Stadium.

Of those athletic directors who favor an expanded playoff, 72 percent believe eight teams should qualify. Also, 66 percent of the ADs said the highest-ranked non-Power Five team should receive an automatic bid to an expanded playoff.

The startling playoff expansion revelation is one of a handful of key findings in Stadium’s two-week series on the state of college football. Of the 130 FBS athletic directors Stadium reached out to, 112 responded to our anonymous survey. While the specifics of how many teams and who qualifies varies somewhat between Power Five and Group of Five conference athletic directors, one thing is certain: Change is coming to the College Football Playoff.

[RELATED: Will There Be College Football in 2020? ADs Weigh In]

“More and more fans are only concerned with the playoffs,” a Power Five AD said. “That’s sad, but true, so we should expand the playoffs when possible. Even if that impacts the bowl system. We have to figure out a way.”

When the College Football Playoff expires in 2026, how many teams should make the playoff? 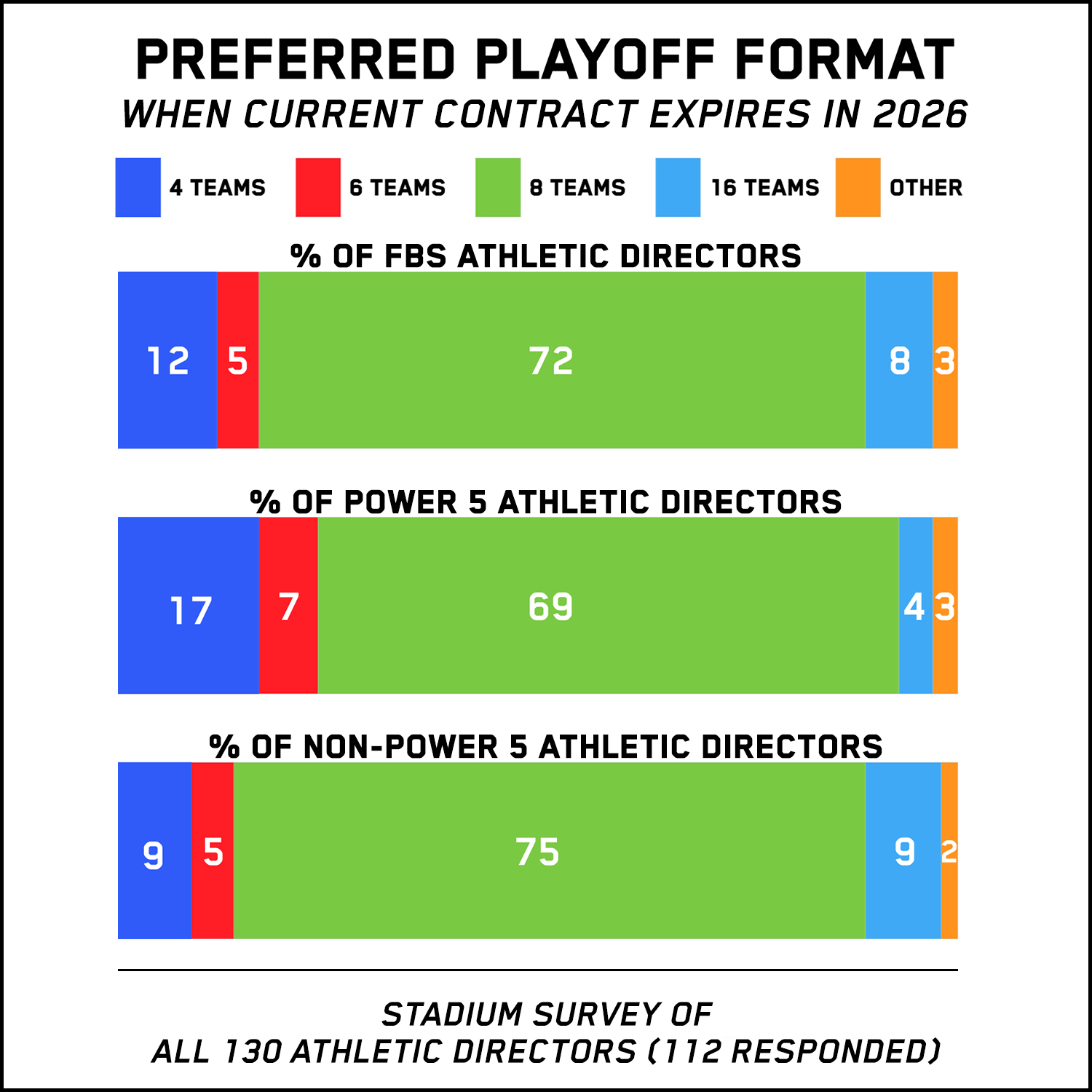 This was the most lopsided result with 88 percent of the ADs wanting an expanded playoff. Of that group, 72 percent prefer an eight-team model, 11 percent want either 12 or 16 teams, 5 percent want six teams and only 12 percent want the playoff to remain at four teams.

“More teams in the playoff is good for fans and student-athletes,” a Power Five AD said.

The biggest difference in the size of the playoff between the two AD groups was a greater number of Power Five ADs (17 percent) want it to remain at four teams, while only 9 percent of non-Power Five ADs prefer the current four-team format.

The Power Five conferences consist of the ACC, Big 12, Big Ten, Pac-12 and SEC, plus Notre Dame. The remaining FBS programs make up the non-Power Five schools, also known as the Group of Five.

If an eight-team playoff is adopted, who should qualify?

It’s not much of a shocker here that this question had the biggest disparity of opinion between the Power Five and non-Power Five ADs. 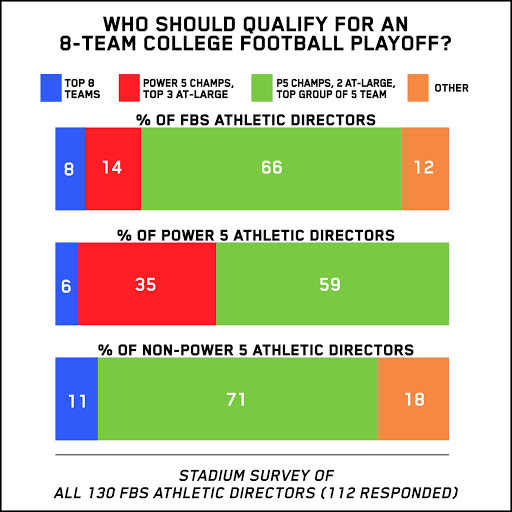 This would give the non-power leagues an automatic bid. However, 35 percent of the Power Five ADs believe the Group of Five should not automatically qualify, unless it’s ranked high enough to earn an at-large bid.

“If they go any another way (and don’t include a non-Power Five school), it would create the opportunity for an anti-trust lawsuit,” a Group of Five AD said.

How strongly do the non-Power Five ADs support this model? Not a single one voted for an eight-team playoff consisting of the Power Five conference champions and the three highest-ranked at-large teams, although 35 percent of Power Five ADs did just that.

The main reason is the non-Power Five ADs believe without a guaranteed bid it would greatly reduce the chances of a non-Power Five school earning a bid in that format. In the playoff’s six-year history, only once has a non-Power Five team ranked in the top eight in the selection committee’s final poll (No. 8 UCF in 2018).

Despite that fact, surprisingly almost double of the non-Power Five ADs prefer the option of the top eight teams (regardless of conference) in the final College Football Playoff rankings making the eight-team playoff as compared to their Power Five counterparts.

There were also some unique proposals. One Group of Five AD preferred the eight teams to be composed of the Power Five conference champions, the top two ranked Group of Five teams and one at-large selection.

Another said they wanted the top seven ranked teams (regardless of conference) plus the highest-ranked Group of Five team to make up an eight-team playoff.

In an eight-team playoff, where should the quarterfinals be played? 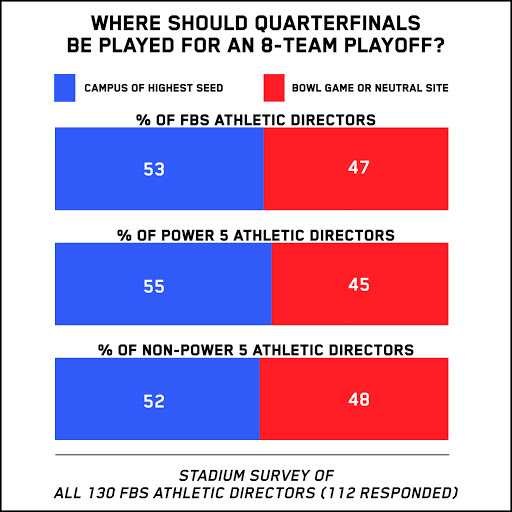 This was literally a coin-flip between holding the quarterfinal games on campus at the site of the four highest-ranked playoff teams or at bowl/neutral sites. The campus sites got the slight nod overall by a 53 to 47 percent margin.

“If we wanted to have the bowl games host the quarterfinal rounds, it would seem like an easy solution,” a Power Five AD said. “You could use the existing New Year’s Six bowls (Rose, Sugar, Orange, Fiesta, Cotton and Peach) to rotate every year so that four would host quarterfinal rounds and the remaining two the semifinals. It would, however, be a concern about the ability of fan bases to travel to multiple bowl sites.”

Coming Thursday: We’re only halfway through the contract for the four-team College Football Playoff, but there’s already a growing sentiment among athletic directors that the playoff should expand from four teams to 16.