#CollegeKickers: When They Make & Miss Field Goals by Distance, Situation and More

Reigning national champion Clemson went 15-0 last season, and the Tigers only had two games all season that were decided by fewer than 20 points. In the first, a 28-26 win at Texas A&M in Week 2, they were the beneficiaries of the Aggies missing two field goals – one was wide right and one was blocked, and in the second, they were on the ropes against an upstart Syracuse team that boasted Lou Groza Award winner Andre Szmyt, the national kicker of the year.

In the College Football Playoff era, where no team has ever qualified for the playoff with two losses, a loss can be enough to keep a playoff hopeful from competing for a national championship, which means the importance of accurate and consistent field goal kicking can’t be understated.

Stadium analyzed all 1,329 field goal attempts that were taken last season by a kicker from a Power Five school (plus Notre Dame) in an attempt to quantify the impact of high-pressure scenarios, such as kicks at the end of a half and kicks to take the lead.

We found that college kickers are essentially automatic inside of 26 yards.

On a yard-by-yard basis, Power Five kickers made at least 92 percent of their field goal attempts from 17 through 26 yards.

Ole Miss’ Luke Logan was the only kicker examined who attempted a 17-yard field goal from inside the opponent’s 1-yard line last season.

Even kicks within 35 yards are a pretty sure bet.

The kickers examined made at least 77 percent of their attempts from every distance between 17 and 35 yards, yielding an “expected value” of at least 2.3 points per attempt for each distance.

We calculated expected value by multiplying the three points earned from a made field goal by the field goal percentage for kicks from that distance. For example, Power Five kickers made 96.8 percent of their field goal attempts from 20 yards last season, which leads to an expected value of 2.90 points per attempt.

The first time expected value drops below 2.00 points per attempt is at 38 yards, so kickers are really tested when their team’s offense stalls outside of the red zone.

The complete breakdown is below.

One of the biggest drop-offs in field goal percentage for Power Five kickers from a given distance to just one yard further was from 35 yards to 36.

This is partially a statistical anomaly (those same kickers converted 73.6 percent of their attempts from 37 yards), but it also speaks to a notable drop-off in accuracy beyond 35 yards. 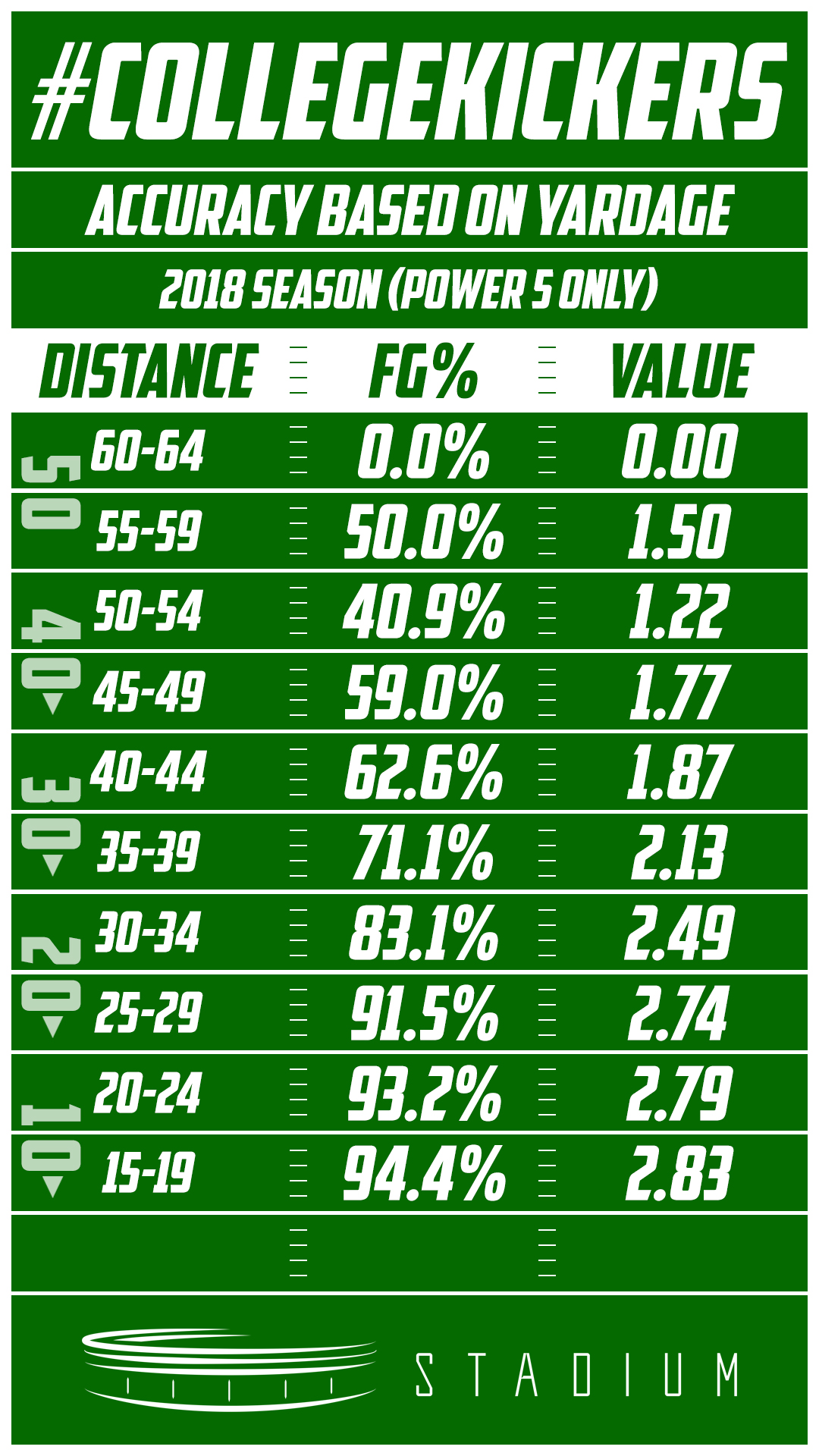 The sample size is much smaller for the shortest and longest field goals – just two kicks were attempted from 60+ yards out and kickers were 5-for-10 from 55-59 yards. Only 18 kicks from inside 20 yards were attempted, while all other ranges had a much larger sample (an average of 178 attempts for every five-yard range from 20-24 yards to 50-54).

While field goal attempts that are taken after a drive stalls at or within the 18-yard line (kicks of 35 yards or less) have the highest conversion rates, they can be a sign of an inefficient offense if kickers are relied upon too frequently that deep into the opponent’s territory.

Some of the highest-scoring offenses in the country last season were ones that had the highest touchdown conversion percentage when reaching the red zone, meaning they rarely had to use their kickers at or inside the 20-yard line to kick field goals of 37 yards or less.

For example, UCF led the country with a 79.6 percent touchdown conversion percentage when it reached the red zone and ranked sixth nationally at 43.2 points per game.

MORE: Takeaways From the Golden Nugget’s Release of the Biggest Games of the Year

There were only two attempts from 60 yards or further last season by Power Five kickers and both were missed on the final play of the first half of games during Week 9.

After Wisconsin intercepted Northwestern quarterback Clayton Thorson, the Badgers sent out Zach Hintze, the team’s kickoff specialist, to attempt a 62-yard field goal with Wisconsin trailing by four. The same day, Arkansas’ Connor Limpert missed from 60 yards in the final second of the first half when the Razorbacks were trailing Vanderbilt by seven.

The longest field goal made by a Power Five kicker last season was Missouri’s Tucker McCann’s 57-yard try with 1:18 left in a game in which the Tigers trailed South Carolina by two.

McCann was 5-for-6 on field goal attempts on the day, along with two PATs to score 17 of Missouri’s 35 points, but the Gamecocks were able to answer with their own field goal with two seconds left to win 37-35.

Those lead-changing kicks from McCann and South Carolina’s Parker White were impressive, considering that Power Five kickers converted just 61.5 percent of their field goal attempts last season when their team was trailing by one or two points. 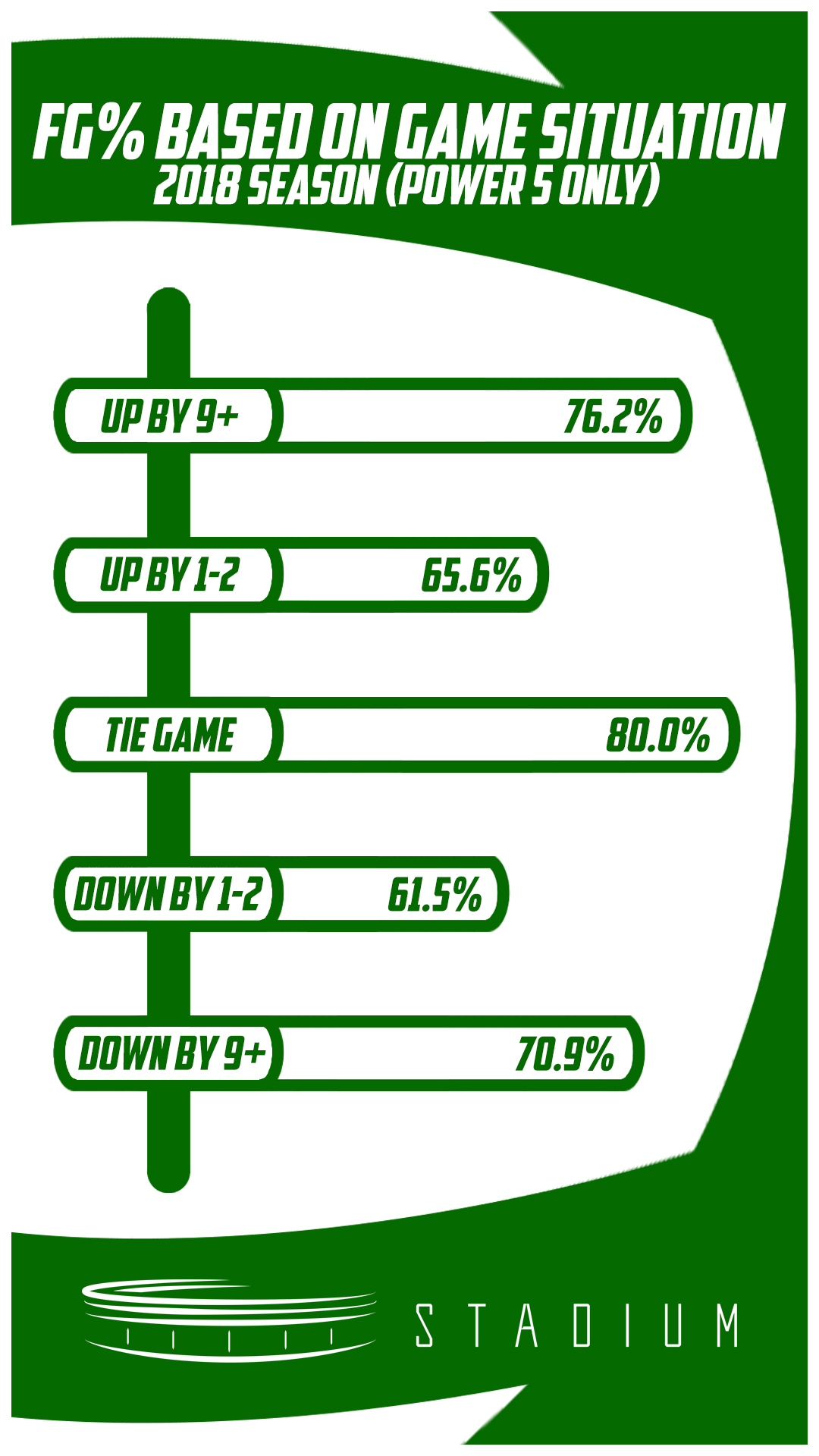 It’s reasonable to believe that there’s slightly less pressure on kickers when the game is tied than when they’re trailing because a miss won’t result in their team being behind.

Kickers made 80 percent of their attempts in tie games last season, but 151 of those 250 attempts were in the first quarter, often on a team’s first or second offensive possession of the game.

Power Five kickers were 10-for-15 on go-ahead field goal attempts in the final minute of the fourth quarter of a game in which their team was tied or trailing by one or two points.

Half of those 10 kicks, which are listed below, were against a ranked opponent and three teams – Iowa, Missouri and Purdue – were on both sides of such a kick last season.

Here are those game-winning field goals: 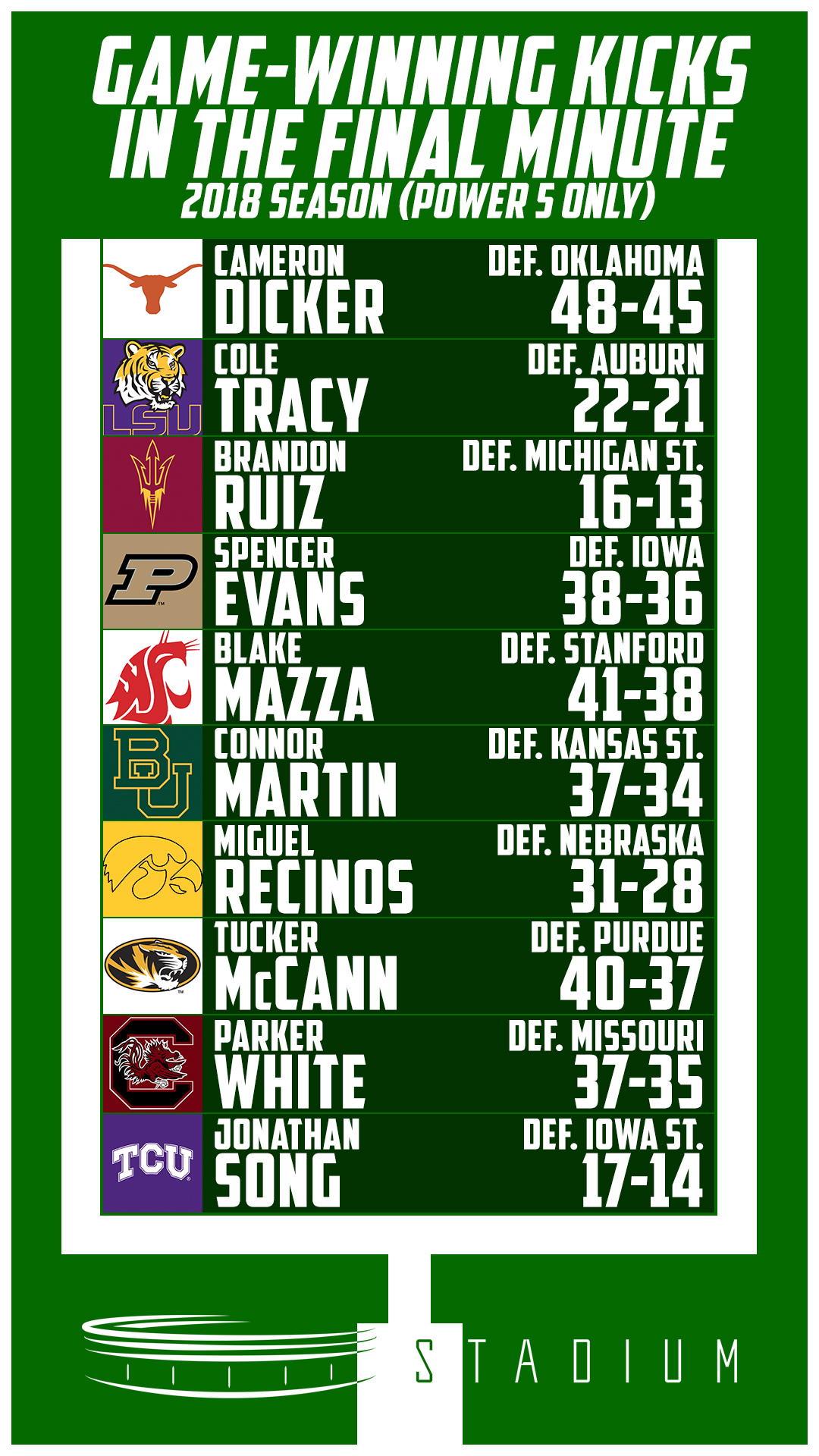 Here are some additional statistical oddities and observations to go along with those game-winning kicks:

At the end of the 2018 season, there were only 19 Power Five kickers who made more than five field goals and whose average made field goal distance was at least 35 yards.

You’ll notice that having a kicker with a big foot doesn’t guarantee a high-scoring offense or a winning season, even if they’re also accurate. While former Clemson kicker Greg Huegel is on the list, so are kickers from Illinois, Kansas, Arkansas and Oregon State – some of the worst Power Five teams in the country.

RELATED: College Football Bowl Lineup for Next Six Seasons to Be Announced