Comparing Tenures of College Basketball Coaches Who Were Fired, Resigned or Upgraded

There have been 54 men’s basketball head coaching changes at the Division I level since the start of the 2018-19 season, with former UCLA Coach Steve Alford being the first victim of the latest coaching carousel.

There were 29 coaches fired, 11 who resigned, stepped down or retired, and 14 who left for another DI head coaching job.

We analyzed each group of coaches who left their last school, by force or by choice, and the level of success they achieved during their previous coaching stop.

The 29 coaches who were fired during the latest coaching carousel were employed for an average of 6.9 seasons at their respective schools. Take out former Saint Joseph’s coach Phil Martelli and his 24 years of service and that average drops to 6.3 years.

If you isolate just the coaches who were fired from power conference jobs – we’ll define that group as the AAC, ACC, Big 12, Big East, Big Ten, Pac-12 and SEC – and the average tenure of the recently fired head coach was 5.3 years, including Wyking Jones’ two-year tenure at Cal and Bryce Drew’s three years at Vanderbilt.

Most coaches spent between three and eight years at their respective schools with Year 5 and Year 6 often marking a decision point among university power brokers. 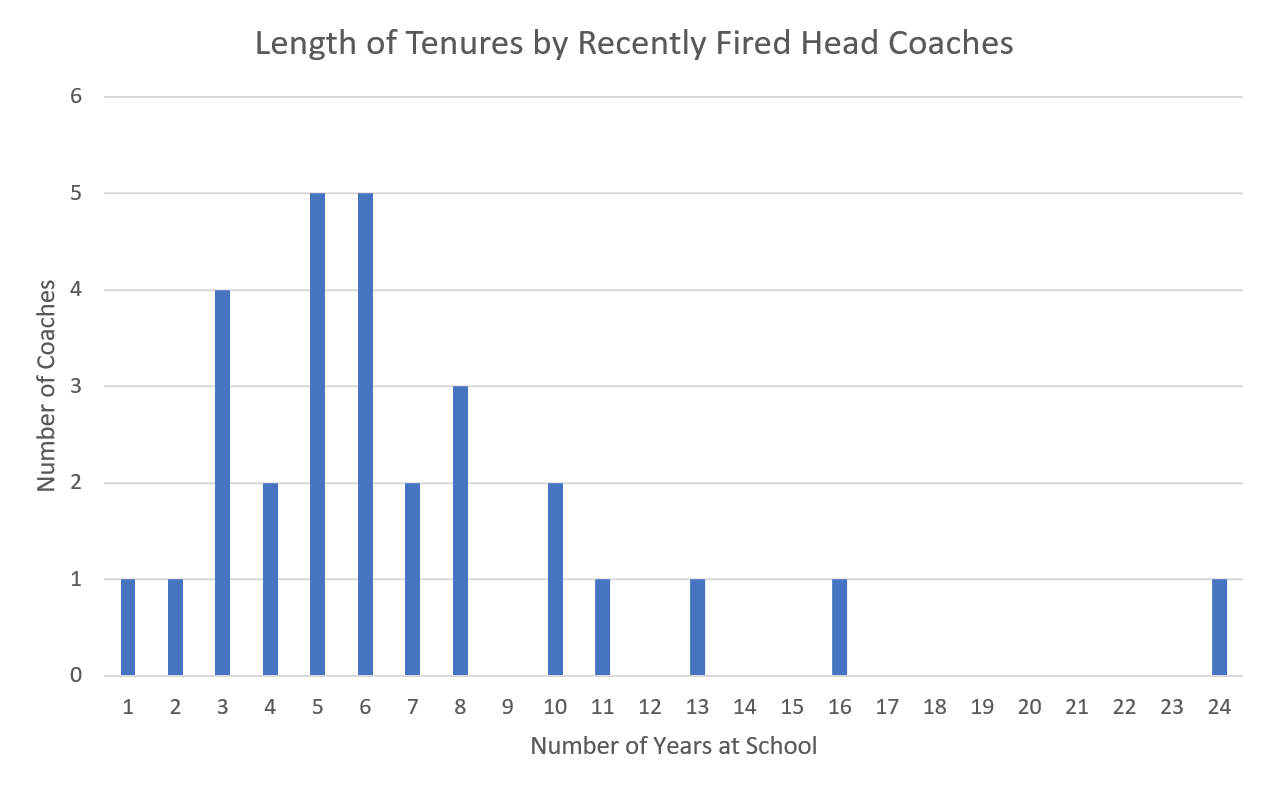 That speaks to the expectations, pressure and short leashes that power conference coaches can face, even if they’re not working for a blue blood program. The power conference jobs that opened this offseason were Alabama, Arkansas, California, Nebraska, Texas A&M, UCLA, Vanderbilt and Washington State.

Many of those schools are more accomplished on the gridiron than the hardwood, but that doesn’t mean each doesn’t have expectations in basketball that can lead to a firing if they’re not matched.

The average winning percentage of the fired head coaches was 42.2 percent.

Twenty of the 29 coaches won less than half of their games at their last school. 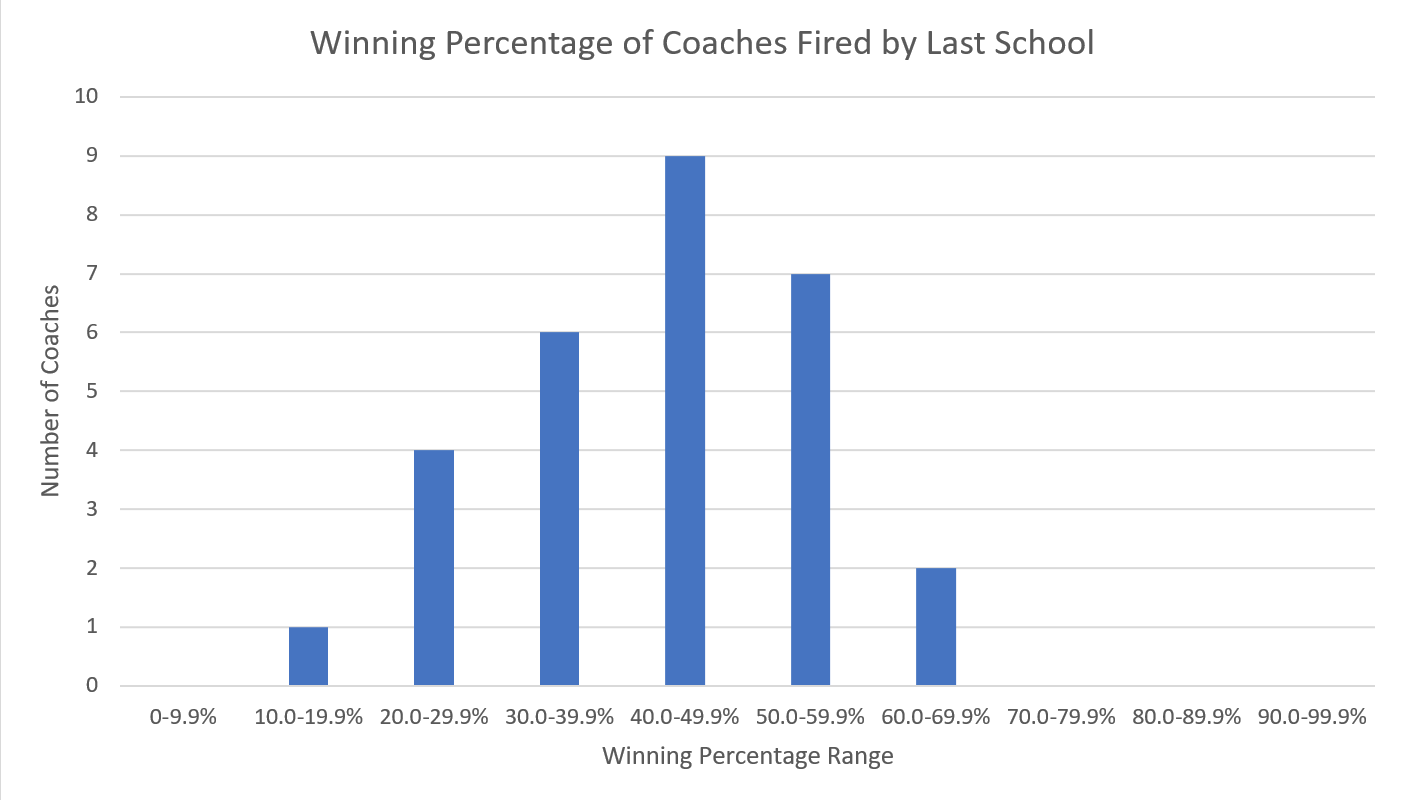 Just eight coaches of the 29 fired head coaches had a winning record at their school, with former UNLV coach Marvin Menzies’ record coming in at .500 exactly during his three seasons in Las Vegas.

Alford (66.3%) and former Arkansas coach Mike Anderson (62.4%), who has since been hired by St. John’s, were the winningest coaches who were fired in this carousel in terms of percentage.

It shouldn’t be a surprise that NCAA Tournament berths were hard to come by for the recently fired head coaches. They averaged just .82 tournament appearances at their last school and combined for just 24 NCAA Tournament bids across their 200 combined seasons at the schools that fired them.

Alford (four) and Anderson (three) combined for seven NCAA Tournament bids at UCLA and Arkansas, respectively, and no other coach had more than the two that Billy Kennedy made at Texas A&M or Todd Bozeman at Morgan State.

Eighteen of the coaches fired this offseason never made the NCAA Tournament at their respective schools and six of them made it to the Big Dance just once, so just five of the 29 fired coaches made multiple appearances.

The 11 college basketball coaches who resigned or retired this offseason had an average tenure of nine years at their last school, which was just over two years longer than the coaches who were fired.

They all spent at least four seasons at their respective schools, with Chris Mullin and Al Skinner spending four seasons at St. John’s and Kennesaw State, respectively. Fran Dunphy (13), Dave Rose (14) and Rick Byrd (20) all spent more than a decade at their last coaching stops.

They average winning percentage of the coaches who resigned or retired this year was 50.3 percent – roughly eight percent higher than the fired head coaches.

That’s an average of almost 2.5 appearances per coach – roughly 1.7 more than the fired coaches.

Fourteen coaches jumped to another Division I head coaching job this offseason after an average of 5.4 seasons at their last school. With the exception of former Wofford coach Mike Young and former Cincinnati coach Mick Cronin, who left for Virginia Tech and UCLA after 17 and 13 seasons, respectively, the rest of the coaches in this group coached for eight years or fewer at their last stop.

Nine of the 14 coaches jumped to another DI program after spending between one and four seasons at their previous school, following the natural progression of moving on to (typically) a program with a higher stature after achieving some measure of success at their last school.

For nine of the coaches who left for another DI school, this was their first time jumping to a new head coaching position at this level. Cronin, Tulane’s Ron Hunter, Washington State’s Kyle Smith and George Washington’s Jamion Christian had coached at two DI schools before joining their third program this offseason, while Texas A&M’s Buzz Williams is now at his fourth school.

With the exception of Dustin Kerns, who jumped from Presbyterian to Appalachian State, and Jay Ladner, who moved from Southeastern Louisiana to Southern Miss, all of the coaches in this group won more than half of their games at their last school. Kerns won 45.6 percent of his games and Ladner won 46.3 percent.

New Arkansas coach Eric Musselman led all coaches with a 76.4 percent winning percentage in four seasons at Nevada. Oats, Cronin, Smith, Cincinnati’s John Brannen and UNLV’s T.J. Otzelberger all won more than 60 percent of their games at their last school.

Now their task is to continue, if not improve, their winning percentages and rates of NCAA Tournament appearances at their new schools so that they don’t join the first group of coaches mentioned in this story – the fired ones – in the near future.