Examining the Concept of a ‘Weak’ NCAA Tournament Bubble

We’re about to reach the stage of the college basketball season where you’ll likely hear about “how weak the bubble is this year” in the weeks leading up to the NCAA Tournament. It’s a refrain that is repeated seemingly annually by college basketball analysts and optimistic fans whose teams aren’t locks to make the tournament.

Before we go any further, it’s worth noting that you can argue that the bubble is inherently weak. By the very nature of teams that are on the bubble, their records and resumes aren’t strong enough for them to be shoe-ins to the NCAA Tournament. If they were any better, they wouldn’t be on the bubble.

So in a vacuum, the teams on the bubble are always going to be perceived as weak compared to the rest of the NCAA Tournament field.

See what we’re getting at?

How the bubble compares from one year to the next is another issue.

There are several ways we could define the NCAA Tournament “bubble.”

For this study, we’re going to examine the bubble through the lens of the last four at-large teams to make the NCAA Tournament on an annual basis because they’re essentially the worst teams that were still good enough to receive at-large bids.

They represent a baseline level of success necessary to qualify for the right side of the bubble.

Here’s a quick summary of our findings. We color-coded the results to show how the last four at-large teams collectively compare to one another from year to year during the eight years of a 68-team NCAA Tournament.

[RELATED: Reactions to the Latest AP Top 25 Poll as Duke Climbs to No. 1]

In one year, the teams in the Last Four In may have had an average RPI in the low 40s but a mediocre efficiency margin.

The opposite happened in 2014, when the last four at-large teams to make the tournament had a strong average adjusted efficiency margin but their average RPI and average win total were pedestrian.

As the chart above shows, you can often find at least one metric in any given year that reinforces the notion of a weak bubble. And in many years you can also do the opposite, using efficiency margins, rankings or win totals to show that the bubble is actually stronger than years past or than fans realize.

But that contrast is pretty fitting of teams on the NCAA Tournament bubble because they all have some good and some bad on their resume, and ultimately it’s the subjective decision of the NCAA Men’s Basketball Selection Committee that determines whether they make the tournament or not.

We graphed our findings below.

That means those teams outscored their opponents by roughly 21 points per 100 possessions.

They were two of the last four at-large teams.

In terms of tempo-free advanced analytics, 2014 was a strong year for bubble teams but the average RPI of 53.5 among the Last Four In was the second-worst average in the last eight seasons. 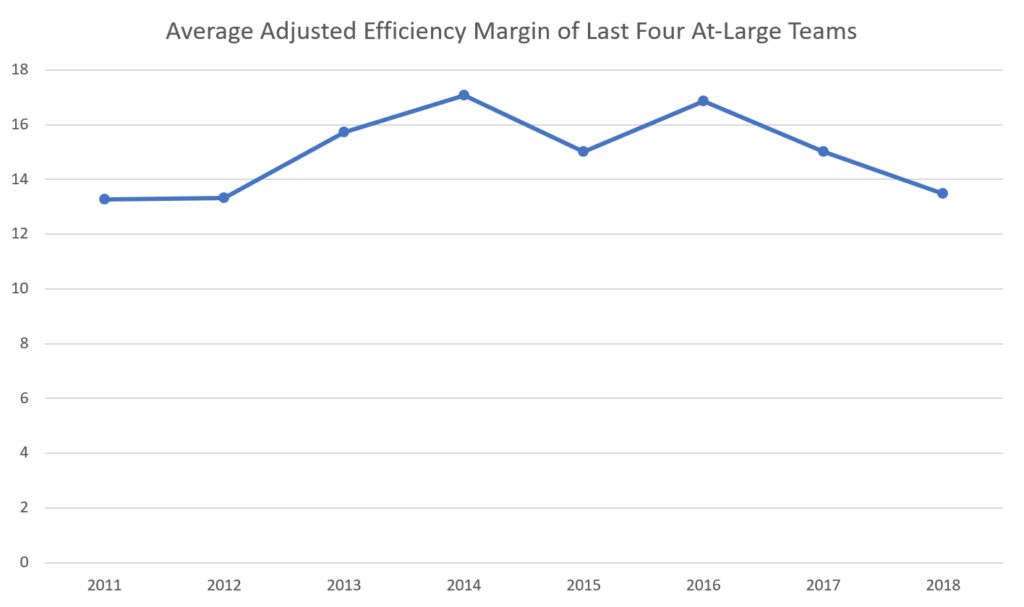 We’ll have to wait until Selection Sunday to accurately quantify how “strong” or “weak” this year’s NCAA Tournament bubble is compared to years past.

But until then, we can project the strength of the bubble.

In terms of adjusted efficiency margin, this year’s NCAA Tournament bubble would be noticeably weaker than any season from 2013 to 2017, but it’s by no means on pace to reach unprecedented levels of “weakness.”

Here’s a look at the average RPI of the last four at-large teams from 2011 to 2018. We used the historical RPI rankings from Selection Sunday from each of the last eight seasons that are available on teamrankings.com. 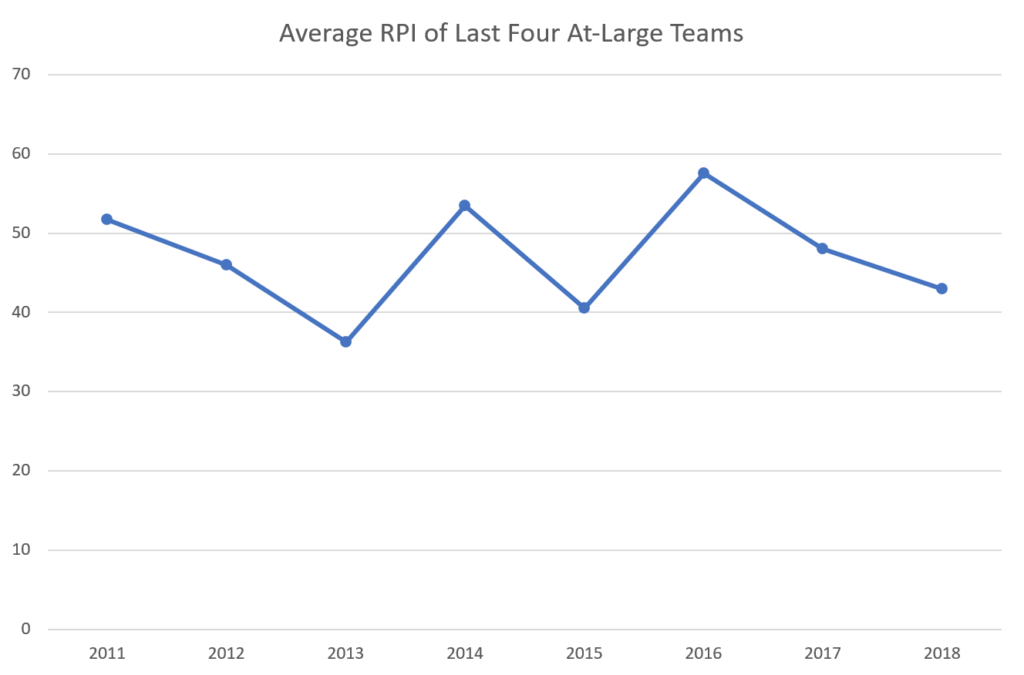 Of course, the RPI is now an outdated metric as of this season after it was replaced by the NET in the offseason.

That means we have no historical precedent for what the typical NET ranking might be for a bubble team, and we’ll have to reset the standard for what the lowest possible NET ranking is for an at-large hopeful.

But for what it’s worth, the average NET ranking as of Tuesday for the Last Four In from Stadium’s latest NCAA Tournament projections is 48.75. The average RPI for a team that’s among the last four at-large teams from the last eight NCAA Tournaments is 47.06.

On average, the last four at-large teams in the 68-team NCAA Tournament field have had roughly 22 wins at the time of the selection show. The last four teams in Stadium’s latest NCAA Tournament projections have won an average of 17 games through Monday, with roughly four weeks until Selection Sunday. 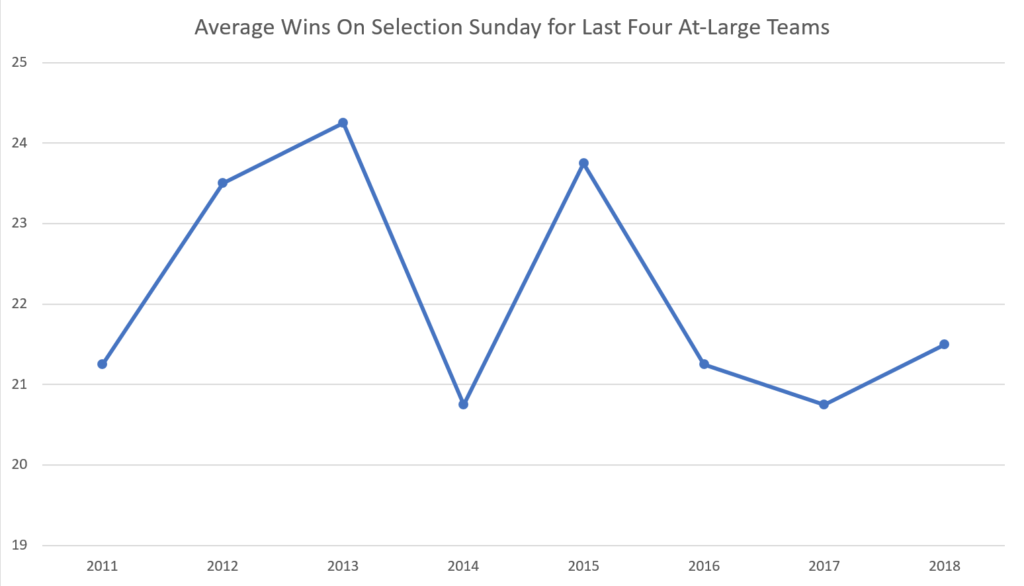 That’s the case again this year. Just look at Furman (22-5), which spent three weeks this season in the AP Top 25 Poll, and could have at least 25 wins on Selection Sunday. The Paladins were among the Last Four In in Stadium’s latest NCAA Tournament projections and as of Tuesday afternoon, they have eight more wins than Florida (14-11), which is also in the Last Four In.

There are almost four weeks left in the season for teams to move on or off the projected NCAA Tournament bubble, but if we use the Last Four In as the sample size and efficiency margins, NET/RPI rankings and win totals as barometers, this year’s bubble shouldn’t be any weaker than past bubbles.

Here’s a year-by-year breakdown of the last four at-large teams from 2011 to 2018, plus the Last Four In from Stadium’s latest 2019 NCAA Tournament projections.

The four teams for this season are listed in italics since they’re simply projections. Their stats are current through Tuesday morning. The RPI rankings are once again from Selection Sunday from the last eight seasons, courtesy of the historical archives from teamrankings.com.