Mount St. Mary’s vs. New Orleans prediction and game preview, as the No. 16 Mountaineers and No. 16 Privateers face off in the First Four of the NCAA Tournament.

It’ll be either Mount St. Mary’s or New Orleans taking on defending national champion Villanova in the first round of the NCAA Tournament. The Mountaineers (19-15) and Privateers (20-11) will face off in a First Four matchup in Dayton to decide who has the right to face the Wildcats, who earned the Tournament’s top overall seed.

The most dangerous mid- and low-majors come NCAA Tournament time are those with no fear, and Mount St. Mary’s certainly qualifies. The Mountaineers played their first nine games away from home and faced the likes of West Virginia, Iowa State, Minnesota, Michigan and Arkansas during a 1-11 start. They took those lumps and are now 19-15 and headed to the Big Dance. Elijah Long and Junior Robinson can heat up at a moment’s notice and will have Mount St. Mary’s blitzing its opponent from the opening tip.

The Mountaineers got crushed on the boards all season. Of the 347 Division I teams, they finished in a tie for 342nd with a minus-7.4 rebound differential per game. That’s likely not going to change in the Tournament, so knocking down their shots becomes of even more importance if they hope to pull off an upset.

Mark Slessinger’s Privateers won the Southland tournament title behind the play of conference player of the year Erik Thomas, who averaged 19.7 points and 7.9 rebounds per game. He’s an undersized power forward who had 14 points and 11 boards in the conference title game. This has been a wonderful season for a university that nearly dropped the men’s basketball program from Division I to Division III due to financial hardships following Hurricane Katrina. It’s a tight-knit squad that knows it will have its supporters rooting hard for the team.

Turnovers have been a major issue all season for New Orleans. The Privateers average just less than 17 turnovers per contest. Only two teams in the nation turned the ball over more often. Defense is an issue as well. Oklahoma State scored 117 against New Orleans, while Northwestern beat the Privateers by 34. Turnovers combined with subpar defense is a recipe for disaster in The Dance.

Mount St. Mary’s vs. New Orleans By The Numbers

The Mountaineers jump on top early and and hold on throughout to earn a date with Villanova in the first round. 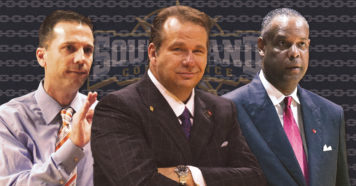 Southland Basketball Coaches Rank the Best Jobs in the Conference

Which school has the best head-coaching job in the Southland?