NORTH AUGUSTA, S.C. — Emoni Bates doesn’t have anyone to reach out for advice, even to just solicit the road map on how to handle all the attention he receives, whether it be from the ass-kissers or even the naysayers. Kevin Durant never had to go through this, neither did Zion Williamson or Cade Cunningham. Not even LeBron James can truly empathize.

Bates burst onto basketball’s grassroots scene as a teenager, but it all changed in October of 2019 when Sports Illustrated tossed the long, lanky and skilled 15-year-old hoops prodigy on the cover of the most iconic sports publication. 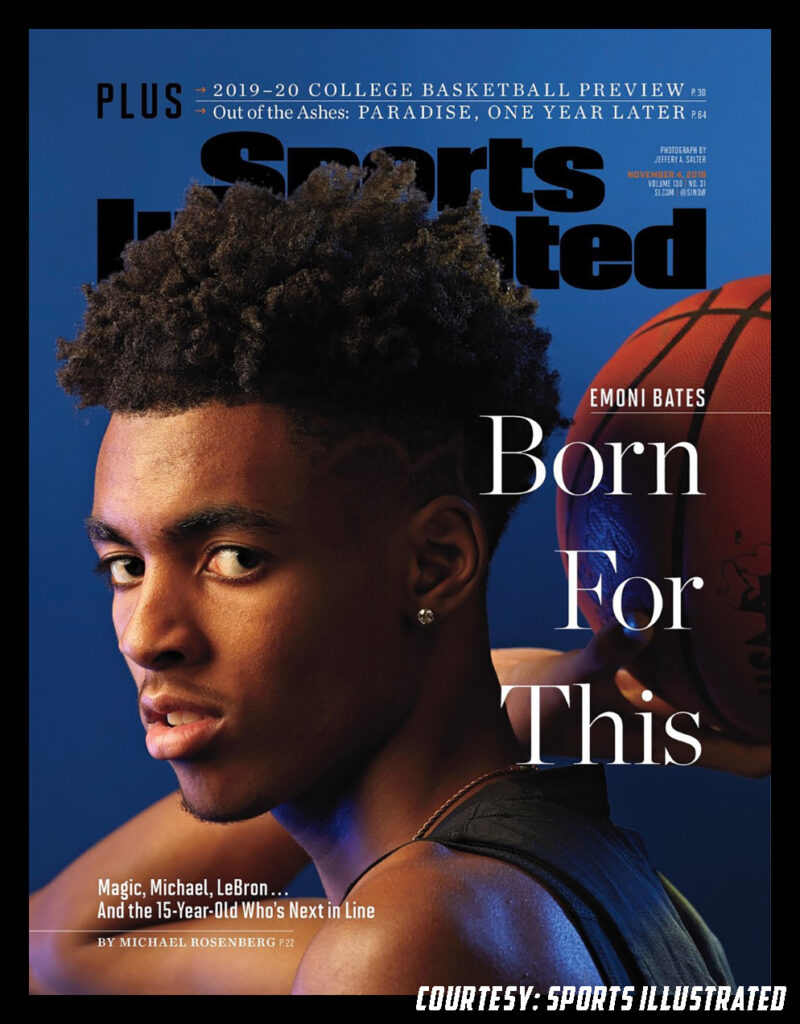 “Emoni Bates: Born For This: Magic, Michael, LeBron … And the 15-Year-Old Who’s Next in Line.”

The lavish attention wasn’t fair, but the reality is that it’s what we often do in the media. We see a player’s eye-popping talent, coupled with their spectacular promise and unlimited potential, and we pump them up, whether it’s to sell magazines or amass clicks.

And then, we usually rip them apart and tear them down when they fail to live up to the hype.

It wasn’t the first time — and won’t be the last — that SI placed a high school hoops star front and center on the cover. The magazine did it way back in 1966 with Rick Mount, put KG on the cover in 1995, labeled LeBron “The Chosen One” in 2002 and even called Jabari Parker the best since James a decade ago.

None of those guys had to deal with the colossal spotlight in this chaotic day and age of the internet.

“I don’t like social media,” Bates told Stadium in a rare, exclusive interview during the Peach Jam, the summer’s most heralded grassroots basketball event. “I get on there once in a while. I delete it — I try not to get on there and stay away from it.”

But let’s face it: It’s virtually impossible for a teenager to remain clear from the chatter. Not when everyone is talking about you on Twitter, Instagram, Snapchat and TikTok.

It had been smooth sailing for the first year or so after the SI feature, with many drawing comparisons between Bates and Durant, but it’s been admittedly arduous the past year, so painstaking that Bates said he even thought about quitting the sport.

Bates was prominent within grassroots circles leading into the SI story, but his life changed after the issue hit the newsstands. Everywhere he went, people wanted a piece of him, some just wanting him to sign the cover and others looking at him as their meal ticket. He still gets inundated with requests, but these days it’s not like it used to be.

Then, it was everyone telling him how good he is. Now, there are fans shouting in the stands when he is struggling on the court.

Bates is soft-spoken and quiet, preferring to live in anonymity when he isn’t on the court. He admitted that the heightened adulation that came immediately following the SI story was “fun at first,” but then became “irritating after a while.” He doesn’t play video games, isn’t a social-media mainstay like so many of his peers and would much prefer to sit at home with his family and cousins and go swimming or watch “Shark Tale”.

“The things people say definitely affect me,” Bates revealed. “People don’t really know me. If people knew who I really was, I don’t think they’d be saying some of the things they say.”

“Outside of basketball, people live real lives, they go through things,” Emoni added. “People deal with stuff they don’t talk about that you might not know. On the court, you don’t know what might be happening. I’ll tell them, ‘Don’t bash a person so much that they break.’ People have feelings, and you should watch out for people’s feelings.”

Bates’ parents, Elgin and Edith, have admittedly been protective of their son, who has drawn outward criticism on both social media and in-person throughout gyms. They are concerned about his well-being. His mother hears the obscenities hurled at him from the stands, whether it’s coming from fellow teenagers or even adults.

“It’s sad that some people are waiting for his downfall,” Edith said. “I don’t want him depicted as a victim or anything, but he’s just a 17-year-old kid trying to do something he loves.”

But through it all, Bates said that he’s been able to deal with the emotional ups and downs, particularly with the help of his mother. His close-knit family keeps him both attuned and grounded.

“These kids have emotions and feelings,” Elgin added. “It’s unfair — especially when we’re dealing with children.”

Bates’ struggles over the past year weren’t solely due to the cynics. Bates lost his close friend, Nareon Grier, on Sept. 11, 2020, when he was shot and killed. Bates’ great grandmother also passed away about a year ago, and he had to adjust to transferring from Lincoln High in Ypsilanti, Mich. to the brand-new Ypsi Prep Academy, which was created by his father.

“I wanted to stop playing,” Bates said. “I was ready to be done with it.”

There were times Elgin didn’t even recognize his son on the court.

“It got trying for him quite a bit,” Elgin said. “You could see through how he played and his emotions. It was out of control. In practice, he wasn’t really there mentally.”

Now Bates is working his way back. He split his time during the July evaluation period between national power Team Final and local Michigan program Bates Fundamentals, a team his father runs. Elgin admitted that it was the time his son spent with Team Final that got him mentally back on track.

“I was overjoyed seeing it,” Elgin said. “You could see the love starting to come back for the game. He was playing with an organization that had one goal in mind: winning.”

With Team Final, Bates played with five-stars such as big men Jalen Duren and Dereck Lively, and high-level guards like Otega Oweh and Corey Floyd. Bates showed his talent and versatility, winning a bunch of games in the process.

But when he went to Bates Fundamentals, the victories became few and far between.

​​”Emoni really embraced being a part of our team,” Team Final director Rob Brown said. “He’s a great team player. We even brought him off the bench some games and he remained a great teammate. He believed in the role and the vision the team had established. Believe it or not, his most underrated attribute is passing. Everyone talks about his scoring, which he can do easily, but his passing really stood out playing with us.

“We also loved the energy he brought to the bench in the Peach Jam, sitting on the bench and cheering even when he wasn’t playing with us. I can’t say enough good things about Emoni.”

Even after Bates Fundamentals was knocked out of the Peach Jam, Bates was sitting at the end of the Team Final bench during the team’s championship run, cheering and often the first one standing in support of his former teammates.

“He’s one of the most unselfish teammates I’ve ever played with,” Oweh added. “He loves to see everyone around him happy and succeed, and loves to win.”

Emoni Bates looking like the CLEAR-CUT No. 1 player in the class tonight.

10 points on 5-6 shooting in the first quarter. Most of his damage has come driving to the hoop. pic.twitter.com/7RspLYcFax

Most rankings still had Bates at No. 1 in the class of 2022, but 247Sports moved him to No. 2 earlier this summer behind Duren. Bates told Stadium that he has finished his high school academic requirements and will re-classify into the class of 2021, where he ranks as a top-five recruit.

If Bates does go to college, he’ll be one of the youngest freshmen in the country. Think about this: The No. 1 frosh, Chet Holmgren, turned 19 on May 1. Bates won’t turn 19 until Jan. 28, 2023. That’s a difference of nearly two years between the two.

Some NBA executives who were able to watch him this past July at the Peach Jam still rave about his talent, skill level and potential, while others told Stadium they are concerned about his thin frame and occasionally poor shot-selection.

“He’s got a world of ability,” one NBA scout in attendance at the Peach Jam said. “I still think he’s the best player in the class, but he’ll need to be more consistent and also he’ll need to get stronger.”

“He’s still so young,” added another. “And his talent is undeniable. There aren’t many kids who have had to deal with what he has in terms of the scrutiny he has faced recently.”

The 6-foot-9 Bates has started to address his body, finally embraced the weight room and has gained nearly 15 pounds in the last two months. He’s still only 183 pounds, but is motivated to get up to more than 200.

Now that the summer circuit is behind him, Bates has set his focus on an impending decision, one that will assuredly come in the next few weeks.

There are now three college options: Memphis, Oregon and Michigan State — despite the fact he decommitted from the Spartans back in April. Bates told Stadium that he will visit Memphis on Wednesday and then take a trip to Oregon on Friday. But that doesn’t necessarily mean he’ll opt for the college route, even though Bates knows he can likely bring in more money in college with athletes now allowed to be paid for their name, image and likeness. There is also the option of joining the G League Ignite.

“We don’t have much time,” Elgin said. “Probably a couple weeks at most. He’ll weigh his options and then the ultimate decision on what he wants to do is his.”

“I’m honestly not sure what I’m going to do yet,” Emoni added.

And there’s one catch.

The NBA rules stipulate that you have to be 19 at the end of the calendar year to be eligible for the NBA Draft. Bates won’t turn 19 until January of 2023 — which means he won’t be able to leave for the NBA after next season, no matter where he decides to play.

“Whatever decision he makes, it’ll be a one-year plan and then he’ll re-evaluate everything after the year,” Elgin said. “I’m still not sure what he wants to do. That’s the mystery. At the age of 17, it’s all a roller coaster.”

MORE: College Basketball Is at a Coaching Crossroads