A new season is upon us and that means it’s time to kick off another season of bracketology. As with every new season there are a ton of questions that will be answered over the next five months: Will the Pac-12 return to form and have several teams challenge for a sweet sixteen bid? Can Texas Tech and Virginia overcome tremendous personnel losses and remain at the top of their leagues? Will Kansas take back the Big 12 crown? Can St. Mary’s unseat Gonzaga and win the regular season WCC title?

Every year there is great anticipation to the kick off the college hoops season. And again fans are treated to a showdown of bluebloods on opening night as Duke faces Kansas and Michigan State takes on Kentucky at Madison Square Garden in an epic double header. Those four teams just happen to be the top four seeds in my first bracket.

But just so we are clear. There is a fair amount of speculation that goes into this preseason bracket. It is based on returning strength of the teams, past history, injury factors and how the non-conference schedule will position these teams for a run at a birth once conference season starts. Let’s take a look at the bracket region by region. 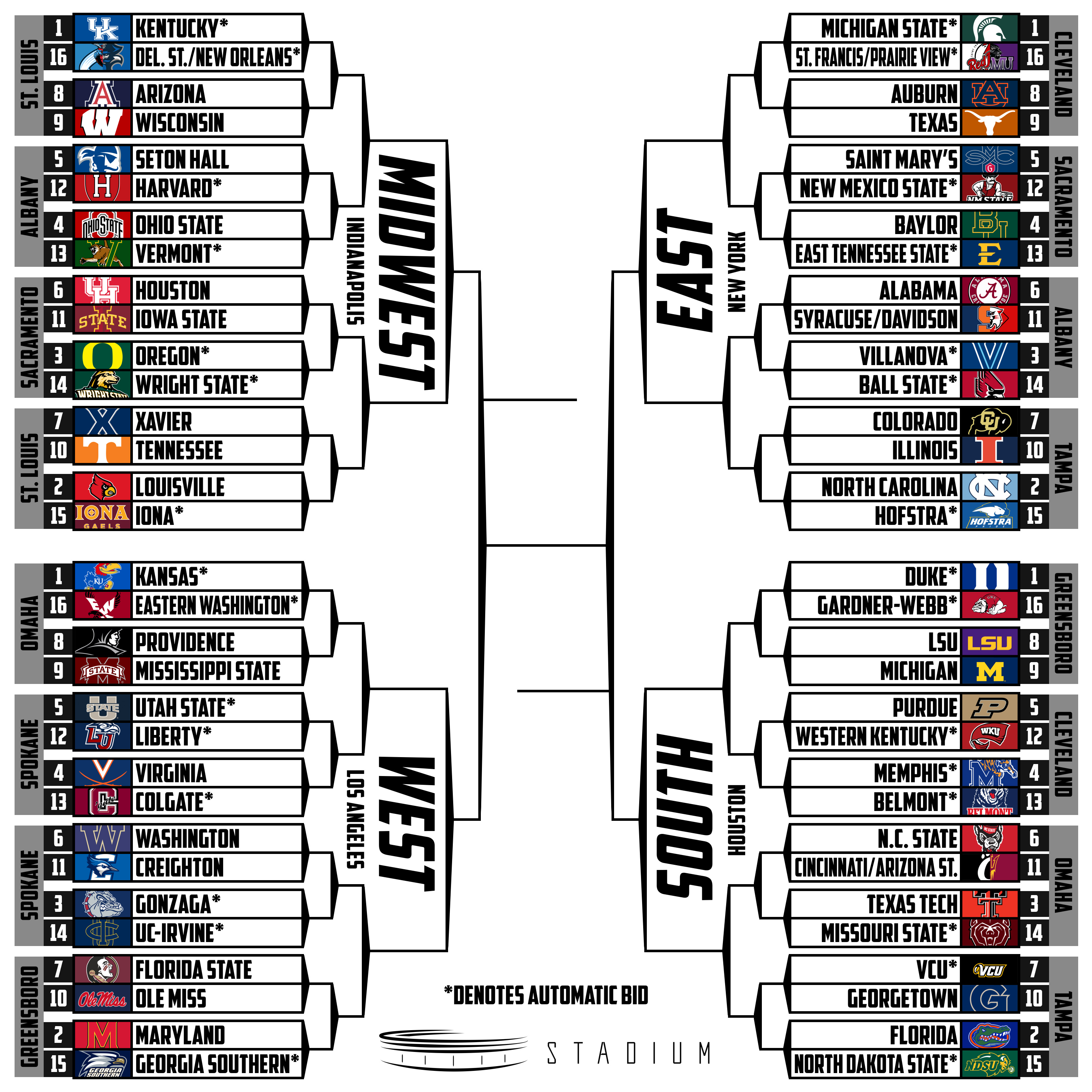 Kentucky garners the No. 1 seed with their rival Louisville settling into the No. 2 slot. The Cards would have an interesting second-round matchup in this bracket as Chris Mack’s team could face his old school, Xavier, in the round of 32. Iowa State squeezes into the field as an 11 seed and heads out west to the Sacramento pod where the top-seeded Pac-12 school, Oregon, will join them.

A bit of a surprise is Seton Hall as a five seed. The Pirates have one of the best players in the country in Myles Powell and certainly could get a better seed than a five. But the supporting cast needs to show me more than they did last year when the Pirates really struggled if Powell could not carry the team due to foul trouble or just having an off night.

This region is full of heavyweights and contains some intriguing matchups as well. Michigan State sits on top of the east but faces a difficult second-round pairing against either Auburn or Texas. I gave a young and talented Villanova squad a three seed but their reward would be a second weekend game with North Carolina.

This region also has an interesting pod of games in Sacramento with Saint Mary’s facing New Mexico State and Baylor meeting East Tennessee State. Either or both of the better seeds could be gone on the first day of the tourney if this scenario takes place.

Despite having the dark cloud of NCAA sanctions looming, the Kansas Jayhawks have way too much talent to not be placed on the one line. And frankly, if this is the bracket the Jayhawks have in front of them in March, the path could be open to a Final Four berth. But the defending champion Virginia lies in their way as well as this year’s darling and mid-major sleeper, Utah State.

What a sports year in Houston! The World Series and a regional final all within five months. This region features a couple of teams that I am very high on heading into the season and two that could reach the Final Four (of course not in this bracket as they are in the same region).

Florida comes in as a two seed and could be a very dangerous out having competed in a loaded SEC this year. And really keep an eye on Memphis. Penny Hardaway is building the Tigers into a power and bringing them back to a level not seen since John Calipari roamed the sidelines in Memphis.

Look for the next updated bracket after the Thanksgiving tournaments are completed. Follow me on twitter @tkbrackets. I will give you updates all season long as we make our way to Atlanta for the Final Four.