Here’s What We Learned From Late-Game Defensive Stands by Alabama, St. John’s and East Carolina

Three college basketball games that tipped off in the 1 p.m. ET window on Saturday were decided on a final defensive stand to end the game, including two upsets. Unranked Alabama held off No. 13 Kentucky 77-75, East Carolina picked up its first AAC win of the season over defending conference champion Cincinnati 73-71 and St. John’s beat Georgetown in overtime 97-94.

Here’s what we learned from the final possessions of each of the three matchups.

Kentucky lost its SEC opener after missing a game-winning three on the final possession of the game at Alabama. The Wildcats had the ball with 4.3 seconds left, trailing by two. Kentucky seemed set on playing for a three-point shot and the win. Given the time, score and athletes the Wildcats have on their roster, they could have tried to get to the rim and at least force overtime with a two.

Instead, they didn’t get the ball inside the three-point line.

Kentucky’s Ashton Hagans received the inbounds pass near midcourt without any resistance, but he pulled up short of the three-point line with about 2.7 seconds remaining as fellow freshman Tyler Herro moved right to left across the court towards him. 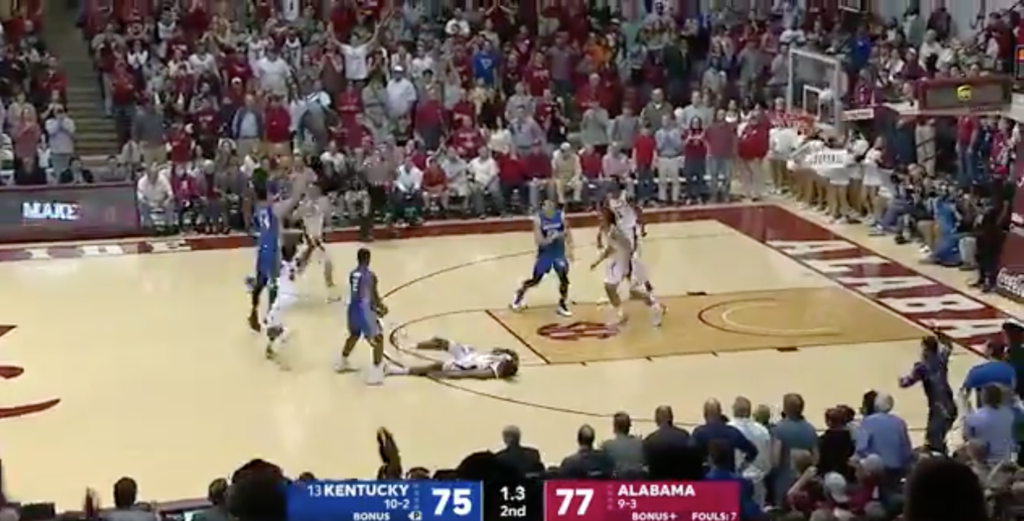 Herro took one dribble and pulled up for the potential game-winning three with about 1.5 seconds left, releasing the ball with roughly 1.2 seconds remaining. It was a fairly clean look from about 25 feet from the basket and while Herro has made 23 threes this season, he’s only shooting 32.9 percent from deep in his freshman campaign.

If Kentucky was philosophically in favor of going all-in for the win (and being comfortable with the results) rather than trying to play for a shot closer to the basket and forcing overtime, then maybe the only potential critique is that Keldon Johnson (42.6 3P%) should’ve been the one to take the last shot.

But when the Wildcats had enough time to reasonably push the ball all the way down the court to try to get an easy look near the rim, it’s fair to wonder if a team that ranks in the bottom 15 nationally in terms of the percent of its points that come from threes made the right call by having a streaky three-point shooter settle for a 25-footer.

Alabama’s defense on the final play of the game was pretty strong with defenders covering the four Kentucky players who weren’t inbounding the ball and the extra defender situated near halfcourt, playing almost like a free safety in football.

The best individual effort on the final possession of overtime in Washington, D.C. came from St. John’s forward Sedee Keita. The 6-9 redshirt sophomore was able to contest a potential, game-tying three-pointer from Georgetown’s James Akinjo, who’s just 6-feet tall, without leaving his feet at the top of the key.

Akinjo had to alter his form in order to make sure Keita wouldn’t block his shot. 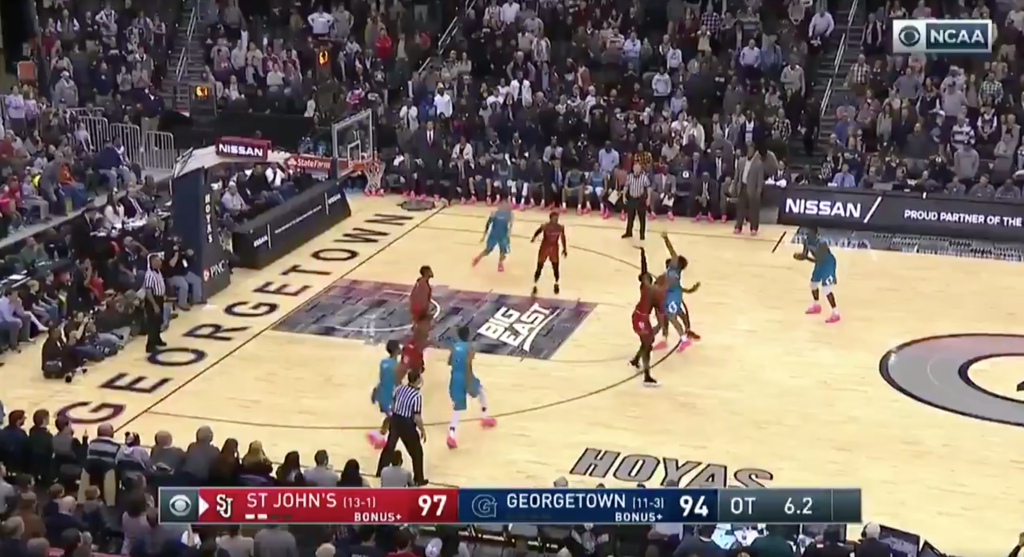 Keita was able to get a hand in Akinjo’s face without giving the Hoyas guard a chance to draw a foul and potentially tie the game at the free throw line.

When Georgetown grabbed the offensive rebound after Akinjo’s miss and Jahvon Blair lined up another three, Keita slid over to contest Blair’s attempt, too. 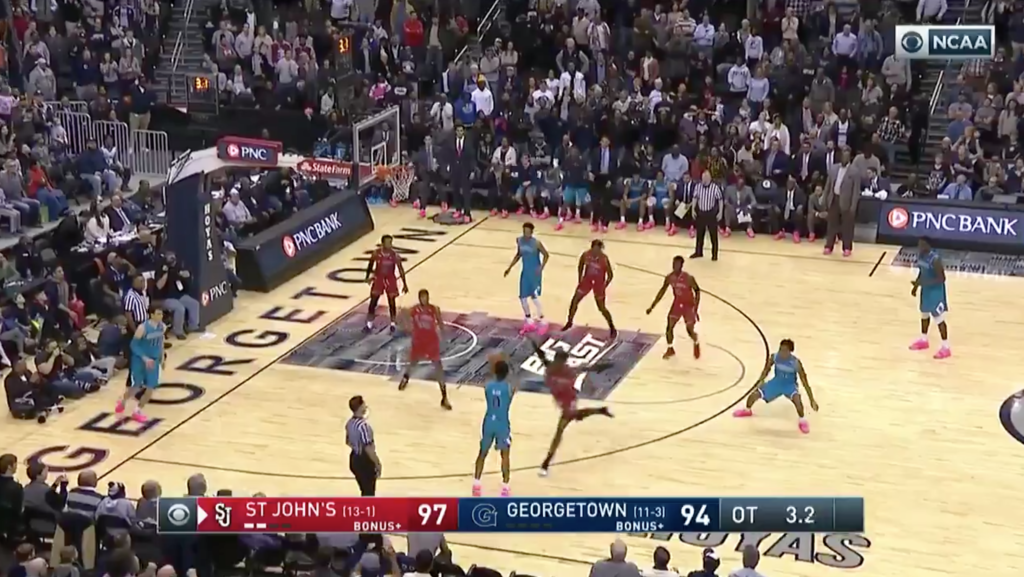 The defense of the four other Red Storm players left St. John’s vulnerable to a decent look to tie the game. They were in position to grab the rebound if the shot missed, but their off-ball denial of the other Georgetown players was collectively lacking.

From when Akinjo took his three to when Blair attempted his three, Govan’s feet literally didn’t move. He remained about 30 feet from the basket rather than trying to crash the boards or re-position for a closer three. He’s on the far right in the screenshot below. 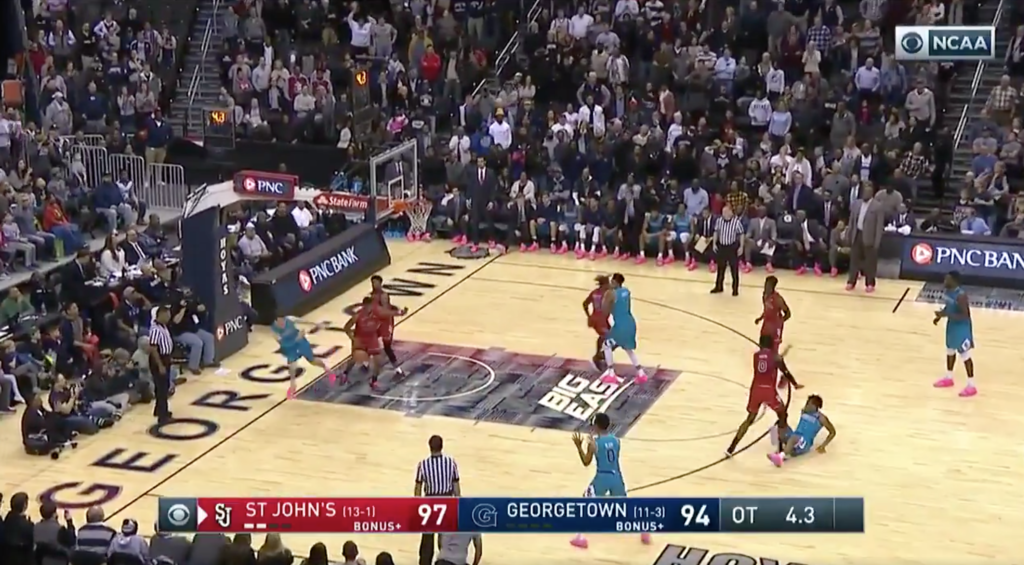 Cincinnati, a preseason AAC contender and still a candidate for an at-large bid to the NCAA Tournament, suffered a damaging loss on the road to East Carolina (No. 259 NET) as the Bearcats’ final shot was blocked.

With 6.5 seconds left and trailing by two, Cincinnati inbounded the ball underneath its own basket. Center Nysier Brooks posted up on the left block and then kicked the ball out to guard Justin Jenifer.

Meanwhile, Jarron Cumberland, the team’s leading scorer (16.6 points per game) who triggered the inbounds pass, took a jab step to his left then ran right, using a screen from Brooks to get free in the left corner.

Jenifer kicked it to Cumberland, who may have had a brief opportunity to fire up a three before he drove to the rim. East Carolina’s Justice Obasohan blocked Cumberland’s double-clutched shot attempt in the lane with about 1.3 seconds left.

The ball fell to Brooks, who had a few tenths of a second to potentially take a second game-tying shot, but he couldn’t quite hang on and Cincinnati dropped its first conference game on the road.

It was a fairly clever play design by Cincinnati after what appeared to be an innocuous inbounds pass. The Bearcats got the ball in the hands of their best player with enough time and space for him to try to tie the game, but East Carolina’s defense stood stout and prevented Cumberland from getting a clear lane to the rim.