Here’s Why Patience Is Important After a Recent Coaching Hire

Chances are if you’re a college basketball fan residing in Bloomington, Indiana, Columbus, Ohio, or Lubbock, Texas, it’s likely been a frustrating last few weeks. Indiana lost its fifth straight game on Tuesday at Northwestern, Ohio State is 0-5 since the start of the New Year and Texas Tech has lost three in a row to unranked opponents.

The two aforementioned Big Ten schools are in Year 2 under their current head coaches and Texas Tech coach Chris Beard is in his third season with the Red Raiders.

Despite their current losing streaks, the future is bright for each program.

Ohio State finished tied for second in the Big Ten last season, swept the Big Ten Player and Coach of the Year awards, started this season 12-1 and currently have a top-10 recruiting class for 2019.

Texas Tech made the Elite Eight last season before losing to eventual national champion Villanova, started 15-1 this season and held its own against Duke. On top of that, the Red Raiders have the country’s most efficient defense.

Unless a school can land multiple five-star recruits every year, which is an elite class that’s essentially exclusive to Duke and Kentucky, you can’t build a program overnight.

[RELATED: These Transfers Are Making an Impact for Top-25 Teams This Season]

There are numerous examples of successful college basketball coaches who were hired in the last 20 years who needed at least four seasons to build the accomplished programs we know today. Here’s the proof.

We examined every current head coach who:

In total, there are 35 head coaches across college basketball’s top seven conferences who fit the profile outlined above.

While each coaching change was under different circumstances, every coach was tasked with rebuilding or, at the very least, reloading a program that wasn’t good enough to make the NCAA Tournament during the previous season.

Our goal is to analyze the improvements these coaches made over the course of their first four seasons as head coach as they saw the players in their first recruiting class cycle through from freshmen to seniors.

For the sake of clarity when graphing the data, we picked out 10 schools that are currently ranked in the AP Top 25 out of this group of 35 schools: Virginia, Michigan, Kentucky, Virginia Tech, North Carolina, Marquette, Maryland, Auburn, Houston and Villanova.

Here are some of the notable results.

Besides Kentucky, which won 35 games in the first year under John Calipari, the other nine schools improved their win total from Year 1 to Year 4 by an average of 10 wins.

But you’ll notice the positive trajectory across the board from Year 1 to Year 4 – with the exception of Kentucky, whose annual success depends on how well its five-star recruits mesh and if it returns any veterans from year to year. 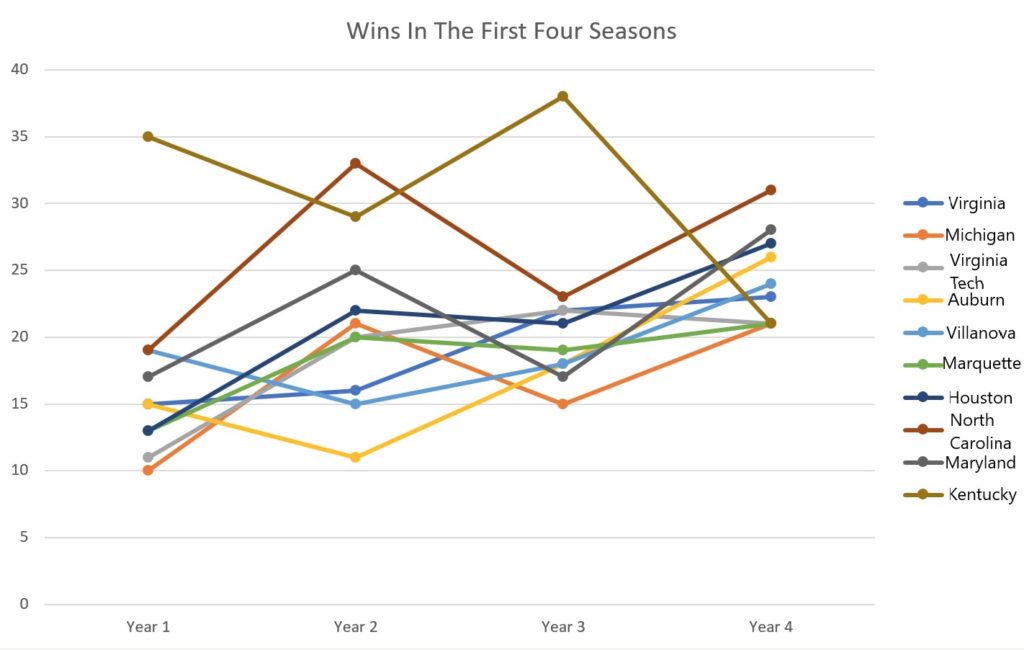 With the exception of Kentucky and North Carolina, which are two of college basketball’s blue bloods, each of the schools in this group had an adjusted offensive efficiency ranking outside of the top 85 in the first season under their current head coach.

There’s a very clear trend of improved offensive efficiency from Year 1 to Year 4. 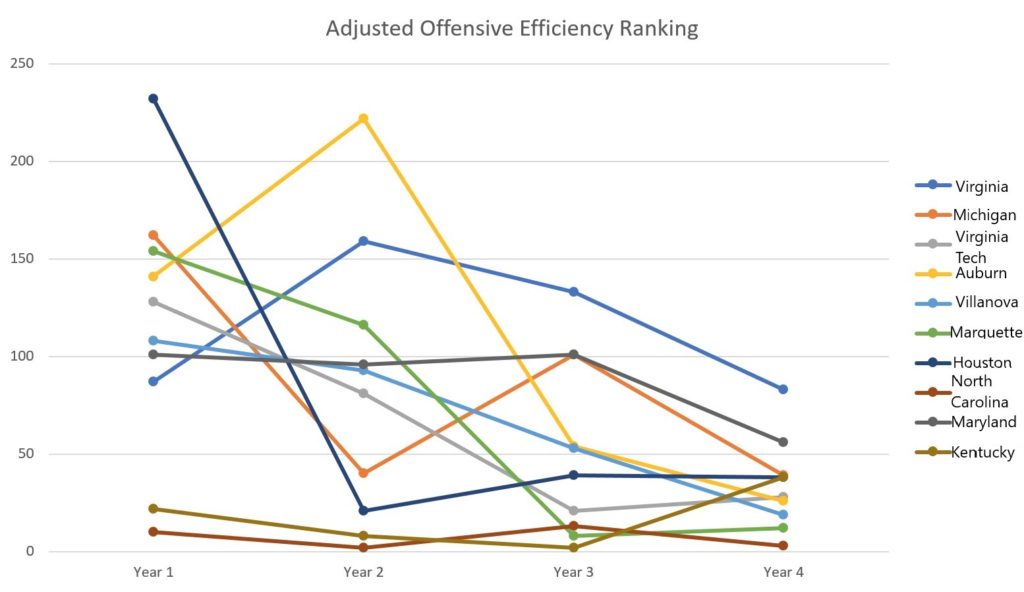 While there was larger year-to-year variance in adjusted defensive efficiency ranking in the first four seasons compared to offensive efficiency, eight of the 10 teams had a higher-ranked defense in Year 4 than Year 1 by an average improvement of 94 spots. 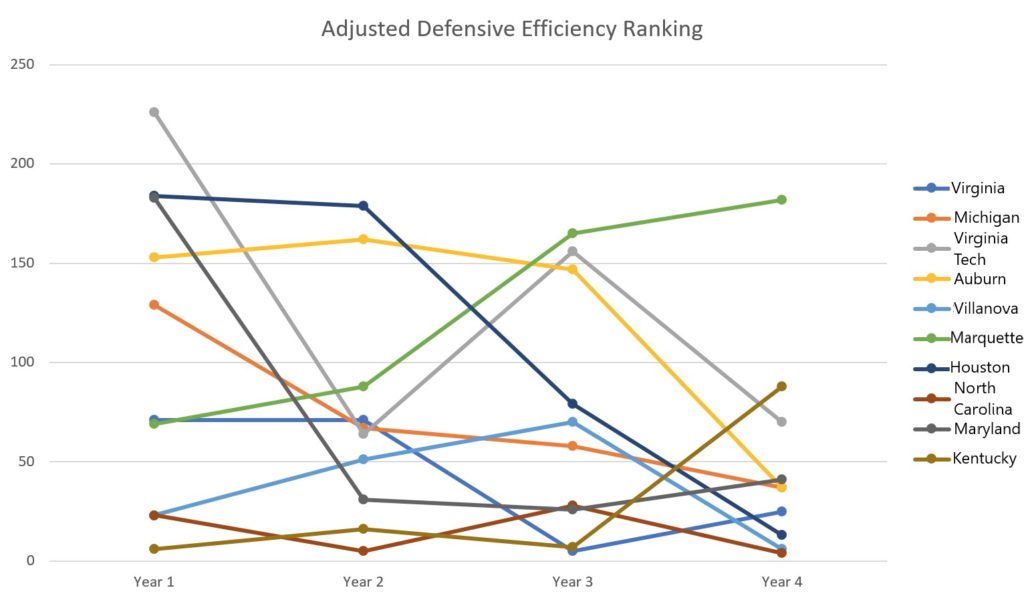 Beilein won just 10 games in his first season in Ann Arbor and the Wolverines went 15-17 in his third season after making the NCAA Tournament in Year 2. Michigan then played for the national championship in Year 6.

Virginia went 15-16, then 16-15 in coach Tony Bennett’s first two seasons. The Cavaliers missed the NCAA Tournament in Year 4. But from Year 5 through Year 9, they earned three No. 1 seeds and won the outright ACC regular season title three times.

In Jay Wright’s first three seasons at Villanova, the Wildcats never made the NCAA Tournament, were just six games over .500 and never cracked the 20-win mark in a season. Fast forward to now, and Villanova has made 13 of the last 14 NCAA Tournaments, including winning two of the last three national championships.

Each coach – and their school’s leadership who decided to stick with him – is a testament to staying the course and trusting that brighter days are ahead, despite a long losing streak or season that doesn’t live up to preseason expectations.