Six of the top 10 prospects from the 2018 recruiting class play for a national championship contender and the same could be said of 14 of the top 25 recruits, according to the 247Sports Composite rankings.

Duke, Kentucky, North Carolina, Nevada, Kansas and LSU are among the 16 teams with the best odds of winning the 2019 national championship, according to Vegas Insider, and they combined to enroll more than half of the 25 most highly-rated freshmen in the country.

But how much does elite recruiting impact which school ultimately cuts down the nets in April?

Quite a bit, actually.

Since 2001, national champions have had an average of roughly seven former top-100 recruits, including five ranked in the top 50, three in the top 25 and one in the top 10, according to the Recruiting Services Consensus Index (RSCI) that dates back to the 1998 recruiting class.

The last 18 national champions have had an average of roughly five future NBA players on their rosters, according to data compiled from Sports Reference. 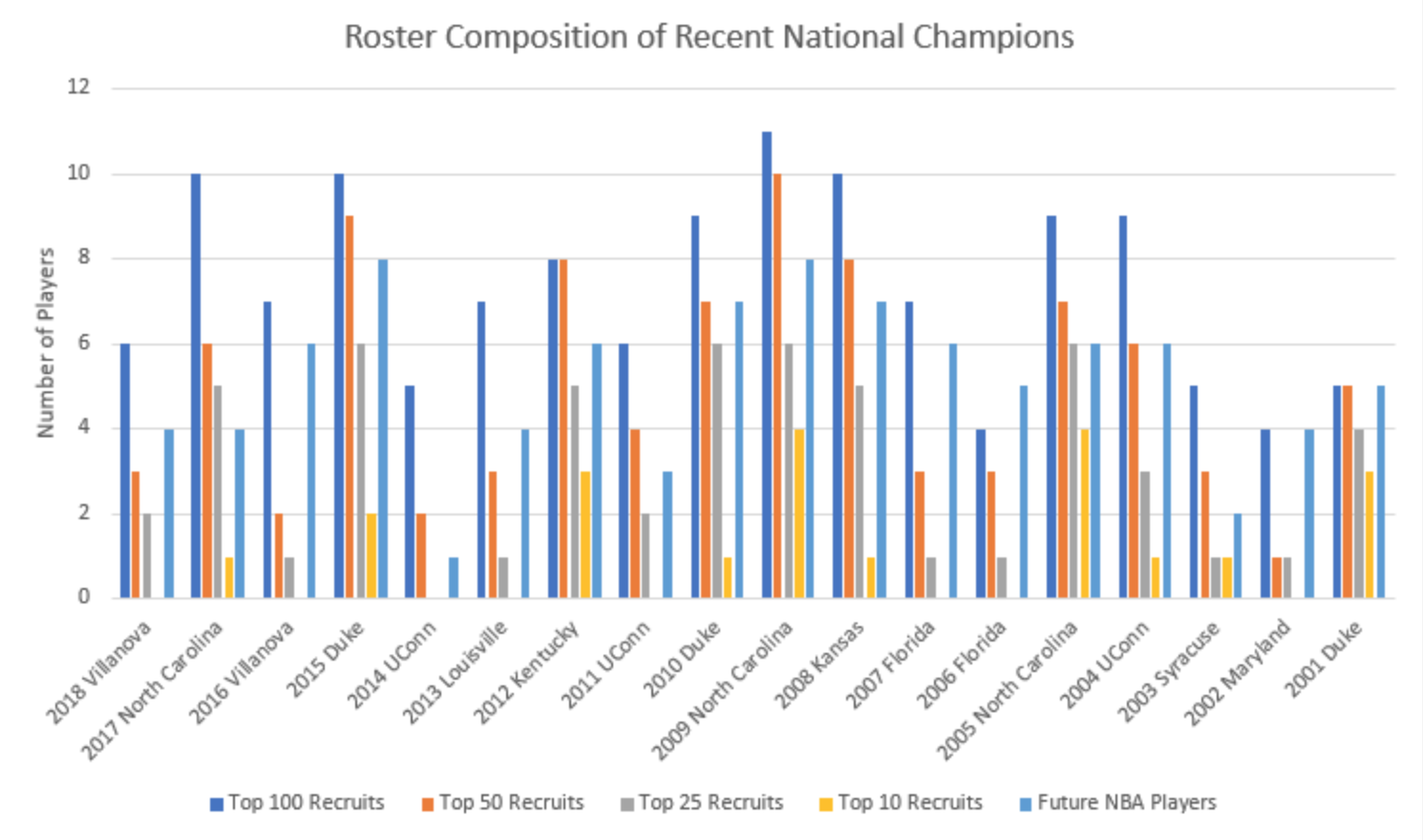 We’ve seen recent Final Four runs by Loyola-Chicago (whose four previous recruiting classes had an average ranking of No. 123 nationally, according to the 247Sports Composite rankings), VCU (one former top-100 recruit), Butler and Wichita State. But in order to win six consecutive games in the NCAA Tournament, history says there’s a talent barrier to entry.

Here’s the team-by-team breakdown of the top 100 recruits and future NBA players for the last 18 national champions.

*Players from these recent national champions are still in school, so these totals could increase

UConn’s 2014 team serves as the baseline of minimum talent to win a national championship. The Huskies had just one future NBA player, the Final Four’s Most Outstanding Player Shabazz Napier, and only two top-50 recruits – neither of whom were ranked in the top 25.

Every national champion since 2001 has had at least four former top-100 recruits. Maryland (2002) and Florida (2006) serve as the baseline in that regard with just four former top-100 recruits each but both schools were incredibly efficient at developing future NBA players. The Terrapins had four future NBA players – Juan Dixon, Lonny Baxter, Chris Wilcox and Steve Blake – and the Gators had five – Joakim Noah, Taurean Green, Corey Brewer, Al Horford and Chris Richard.

Maryland in 2002 and Florida in ’06 had just one top-25 recruit each, and neither had a former top-10 prospect. UConn is the only school since 2001 that didn’t have at least one former top-25 recruit.

Duke and North Carolina have often had a wealth of riches in terms of top-100 recruits. The Tar Heels had 11 former top-100 recruits on their roster in 2009, one more than the 2017 Tar Heels, 2015 Duke and 2008 Kansas. But you really only need half of that amount to find multiple instances of past national title winners this century.

Fifteen of the last 18 national champions have had at least four future NBA players. UConn in 2011 (three) and 2014 (one), plus Syracuse in 2003 (two) are the only exceptions and each was led by a March Madness icon.

Of course, the average of 5.1 future NBA players on the rosters of national champions since 2001 could still increase if players like Villanova’s Phil Booth, Dhamir Cosby-Roundtree or Jermaine Samuels, or North Carolina’s Luke Maye, Kenny Williams, Brandon Robinson or Seventh Woods, who are all still in school, appear in an NBA game in the future.

If we apply the data outlined above to this season, only two teams meet the average national championship roster composition of seven top-100 recruits, including five top-50 recruits, three top-25 recruits and one top-10 recruit, according to the RSCI.

It shouldn’t be a surprise that Duke and Kentucky are those two teams.

If we look at the absolute baseline level of elite talent on a recent national champion (Maryland’s 4/1/1/0 split of top-100/top-50/top-25/top-10 recruits on its 2002 team), there are eight schools in the top 25 of kenpom.com that fit that criteria: Duke, Michigan State, North Carolina, Kentucky, LSU, Kansas, Maryland and Louisville.

Some notable omissions are Virginia (5/2/0/0), Gonzaga (2/0/0/0), Michigan (6/1/0/0), Tennessee (0/0/0/0), Texas Tech (2/2/0/0) and Purdue (1/0/0/0), which speaks to the ability by each program’s ability to identify and develop talent. However, the high school recruiting rankings of the players on the teams listed above obviously don’t disqualify them from national championship contention.

The following table shows the top-100 recruiting breakdown for the top 25 teams on kenpom.com, as of Monday afternoon. The numbers below show the level of elite high school prospects each team would have when at full strength, listed in descending order of former top-100 recruits on each school’s roster.

Virginia, Texas Tech and Gonzaga each have a likely top-10 pick in the 2019 NBA Draft in De’Andre Hunter, Jarrett Culver and Rui Hachimura, respectively. The Cavaliers, Bulldogs and Volunteers have multiple potential first-round draft picks and that’s clearly a more important measure of national championship contention than having a player who was ranked in the top 10 as a high school senior.

As a reminder, the last 18 national champions have had an average of five future NBA players compared to an average of just one former top-10 recruit. Titles have been won with as few as one or two future pros.

Ultimately, there are two types of roster compositions that have led to national titles since 2001: having a high-usage, highly efficient Carmelo Anthony/Kemba Walker/Shabazz Napier-type standout or having at least four players who will someday play in the NBA.

If the team you pick to win the 2019 national championship doesn’t fit either of those profiles, you should probably take a second look at your other options.