Horizon League Coaches Rank the Best Jobs in the Conference

This is how polling in the Horizon League shook out among coaches who voted, with one being the best and 10 being the worst: 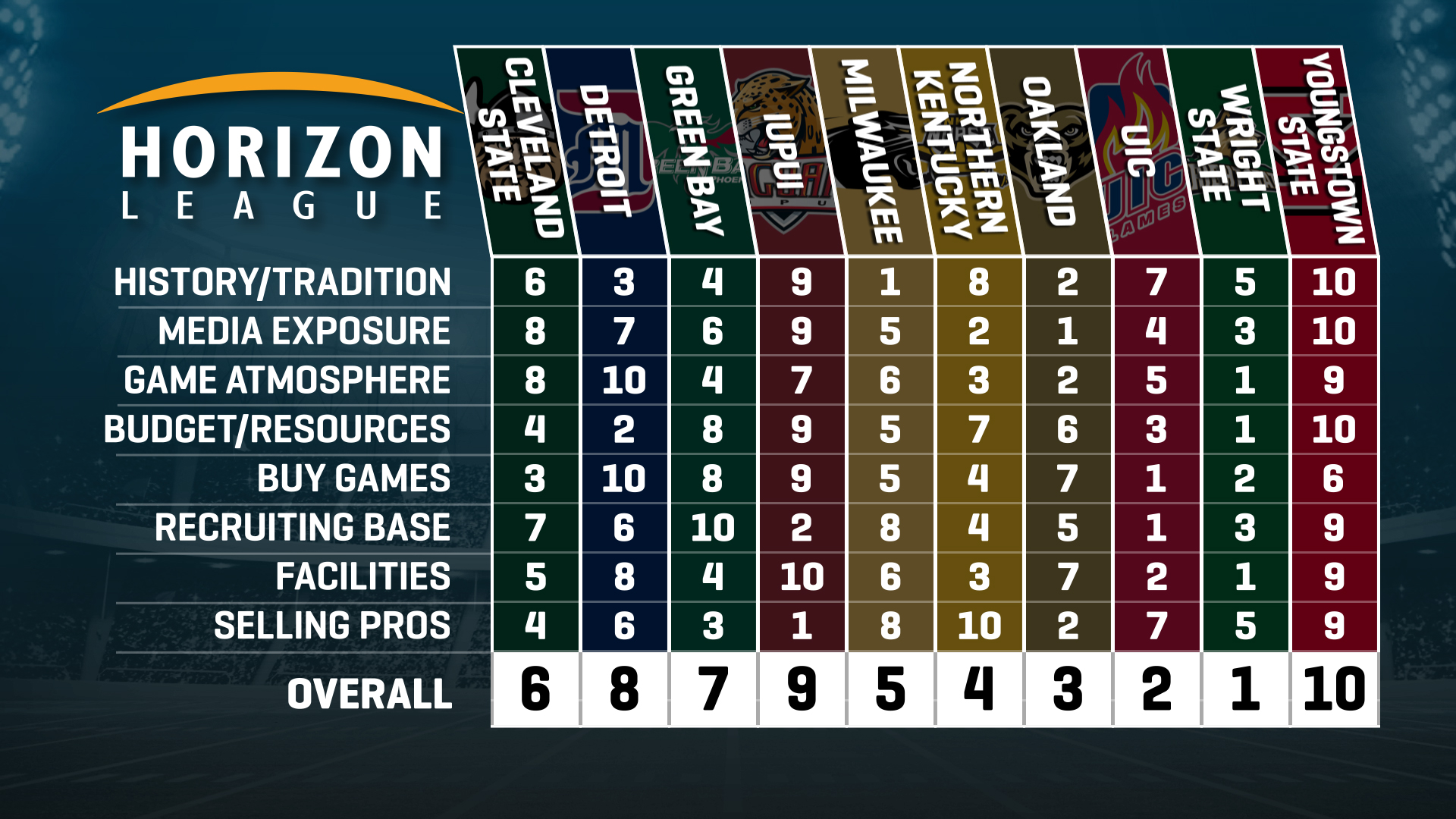 1. Wright State (67) – The history doesn’t blow anyone away, but the Raiders have been to a trio of NCAA tourneys – in 1993, 2007 and 2018. Ralph Underhill took them in 1993, Brad Brownell in 2007 and current coach Scott Nagy last season. Wright State has the best support, facilities and fan support in the league.

Where they win: “Basketball is the priority, it rules the roost. The fans are passionate, they have the best facilities in the league and it’s in a great location for recruiting because you’re close to so many places.” – Horizon head coach

The knock: “So many schools in the area to recruit against, and the Ohio kids that are good enough would rather go to the MAC schools. It’s a commuter school, and the expectations are somewhat unrealistic with them thinking they can be like Dayton.” – Horizon assistant

2. UIC (58) – There have been a trio of NCAA tournament appearances for the Flames – in 1998, 2002 and 2004. Last season was the first since 2004 that UIC finished with a better than .500 mark in league play. UIC has the resources and recruiting base to fare better than it has in recent years.

Where they win: “The city of Chicago is a huge selling point, not just for the city itself but also with all the players in the area.” – Horizon assistant

The knock: “The program just hasn’t had nearly as much success as it should with all it has to offer. There’s just no real tradition.” – Horizon head coach

Where they win: “Location and game-day atmosphere. It’s one of the best mid-major student sections in the country.” – Horizon head coach

The knock: “Facilities and budget. What Greg Kampe has done over there with what he’s had to work with is incredible.” – Horizon assistant coach

4. Northern Kentucky (48) – The program has only been in the D-1 ranks since 2012-13 and already have an NCAA tourney on its resume under current coach John Brannen. However, there’s not much tradition due to the novelty of the program at this level. Northern Kentucky has upper-tier facilities and one of the best atmospheres in the league, but there’s no history of pros to sell.

Where they win: “The arena and location. It’s in a suburb, but right next to a major city.” – Horizon head coach

The knock: “No tradition and a lack of resources.” – Horizon assistant coach

Where they win: “The city and a five-hour recruiting circle that’s better than people think.” – Horizon assistant coach

6. Cleveland State (43) – The Vikings are best-known for going to the Sweet 16 as a No. 14 seed back in 1986 under Kevin Mackey. They upset Bobby Knight’s Indiana Hoosiers. However, Cleveland State only went to the NCAA tournament one other time – in 2009. The Vikings have their pluses – they can sell former NBA guard Norris Cole – and their minuses (poor fan support).

Where they win: “Great arena, but the downside is that no one comes to the games. The city of Cleveland has made a comeback, although it took a hit with LeBron leaving again.” – Horizon assistant coach

The knock: “Cleveland State has a rep of developing good players, but they all leave for bigger programs. It’s hard to keep kids around at a school that doesn’t really have much of a campus.” – Horizon assistant coach

7. Green Bay (41) -The Phoenix have been to a handful of NCAA tourneys — including one in 2016 under current coach Linc Darner. But it was Dick Bennett who took the program to three tourneys in the early to mid-1990s. Green Bay can also sell one of the few active NBA players in the league in Alfonso McKinnie — who transferred from Eastern Illinois to Green Bay in 2013.

Where they win: “Good facilities and a three-hour drive to Chicago for recruiting.” – Horizon assistant

The knock: “It’s in Green Bay. There’s just not a lot of players in the area, and the other schools in the league are all close to a bunch of players. That makes it tough for them.” – Horizon head coach

8. Detroit (36) – The Titans have gone to a half-dozen NCAA tournaments — although just one since the turn of the century. There was a Sweet 16 way back in 1977. Detroit ranks towards the top of the league in history and resources, but dead last in terms of game-day atmosphere.

Where they win: “They can use the city of Detroit and they also have decent financial support in some areas, and history.” – Horizon assistant

The knock: “No one really comes to the games. The atmosphere stinks. Maybe Mike Davis will get it going, but they have to create some interest and also upgrade the facilities.” – Horizon head coach

9. IUPUI (32) – The biggest sales tool that IUPUI has is NBA veteran George Hill, and the recruiting base of Indianapolis. The program has been to one NCAA tournament in 2003, when it was in the Summit. IUPUI went from the Summit to the Horizon in 2017-18.

Where they win: “The city of Indianapolis and the fact that it’s close to the airport.” – Horizon head coach

The knock: “No practice facility and the budget. They have to step it up with resources if they are going to compete for league titles.” – Horizon assistant coach

10. Youngstown State (16) – The Penguins have never gone to the NCAA tournament, and have had just a pair of winning seasons since the turn of the century. Dan Peters couldn’t win, John Robic couldn’t get it done, and neither could Jerry Slocum. Youngstown ranks in the bottom two in seven of the eight categories.

Where they win: “Honestly, I can’t really think of anything. The job is brutal.” – Horizon head coach

The knock: “Where do you start? It’s by far the toughest job in the league, and it’s not even close. They don’t have support, tradition or really much to sell, to be honest.” – Horizon assistant