How Many Decades Will It Take for Virginia Tech & Wisconsin to Finally Play Each Other?

In the spring of 2004, then-Virginia Tech Athletic Director Jim Weaver and former Wisconsin Associate Athletic Director John Chadima spoke about scheduling a future non-conference series in football and they came to an agreement for their schools to play in 2016 and ’17.

“Best wishes for an enjoyable and relaxing summer,” Weaver wrote to Chadima on May 21, 2004 on Virginia Tech letterhead that had a watermark for “The BIG EAST Conference” at the bottom of the letter, along with a copy of the contract.

Not only did the Hokies play their first season in the ACC that fall but the Big East no longer competes in football, period.

Fast forward 15 years and the two schools still have never played each other in football, despite a verbal agreement in 2004 that led to a contract signed on June 16, 2006 by Weaver and less than two months later by Wisconsin AD Barry Alvarez.

The series’ serial postponement is a unique byproduct of the jigsaw puzzle that is college football scheduling as athletic directors and coaches want to maximize the number of home games for revenue purposes and to satisfy ravenous fan bases, and to create a schedule with marquee opponents but not one that’s too tough, especially in non-conference play. 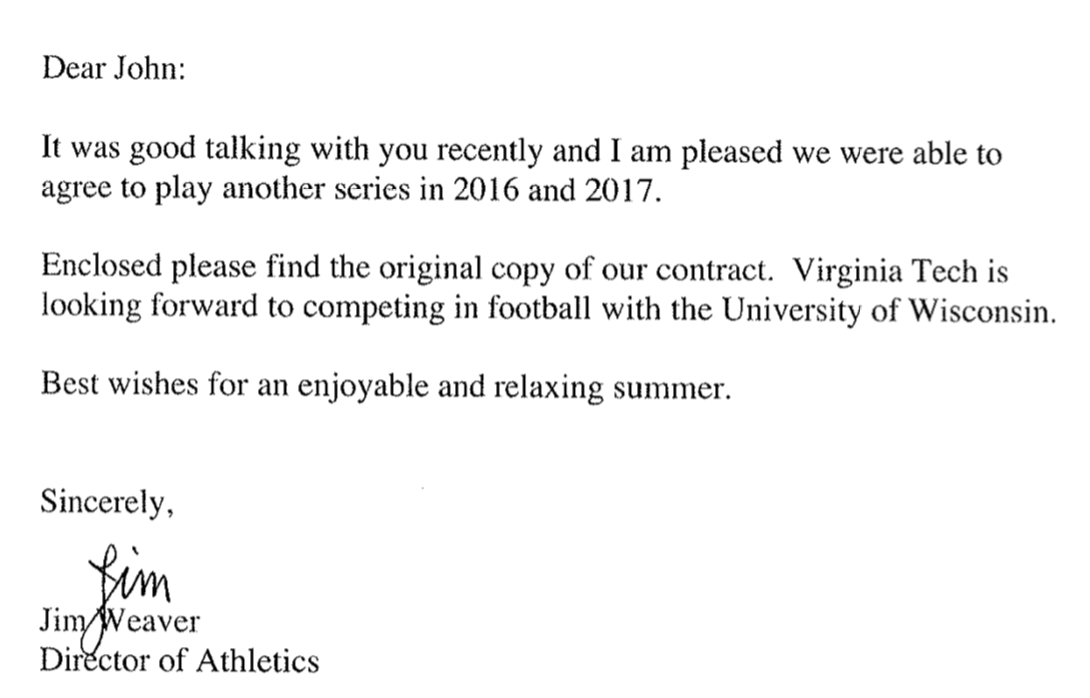 Virginia Tech was to set host Wisconsin on September 10, 2016 in a game with specified agreements, such as that kickoff was to be between 12 p.m. and 8 p.m. ET, and that it was to be officiated by Big Ten officials.

Virginia Tech agreed to make a return trip to Madison for a game on September 9, 2017.

In the last six years, there have been three amendments to the original contract as the long-awaited Badgers-Hokies series has been pushed back to the 2019 and ’20 seasons, then 2024-25, and most recently, 2031-32.

That means the Virginia Tech and Wisconsin players who will compete in the non-conference series in 12 years, barring another amendment, are somewhere between six and 10 years old right now, born years after the original contract was signed.

They won’t get on the radars of college coaches for another five to nine years.

Both Virginia Tech and Wisconsin declined to comment on the series through a school spokesman.

Weaver, the former Virginia Tech AD whose email we referenced at the top, passed away in 2015 and his successor, Whit Babcock, has now spent more than a half-decade in his current role.

Wisconsin is on its fourth head coach since the verbal agreement in 2004, not including its athletic director and former head coach Barry Alvarez twice stepping in to coach one game in the 2012 and 2014 seasons.

The chart below shows the evolution of the Virginia Tech-Wisconsin series. While the original contract lists the initial mutually agreed upon dates of series as taking place in 2016 and ’17, FBSchedules reported that the two schools were originally supposed to play each other in 2008 and ’09, which means the series has potentially been rescheduled on four different occasions.

The third attempt at the Virginia Tech-Wisconsin series, agreed upon in Amendment #2, had to be rescheduled when the Badgers scheduled a two-year series with Alabama.

Amendment #3, which was signed in July, replaced Article 15 of the original contract, which applies to the financial damages owed if the agreement is broken. Now, if either school fails to comply with the series that’s scheduled for September 13, 2031 and September 18, 2032, by “cancellation or failure to appear,” it’ll forfeit $1 million unless the cancellation is mutual – a forfeiture increase of $700,000 from the original contract. The two schools want the series to happen, clearly.

If the cancellation is mutual, the agreement is null and void.

It’s pretty incredible to think about the changes in college football (and college athletics as a whole) that have happened since Weaver’s 2004 letter and the potential changes that could come prior to the 2031 season, when Wisconsin is scheduled to finally make its trip to Blacksburg, Virginia.

In the spring of 2004, there had only been six years of the BCS. LSU and USC were the reigning co-national champions – the last time multiple teams were recognized by the NCAA as national title winners in the same season.

Miami (FL), Oklahoma and Tennessee had each won a national championship under the new system in the previous six seasons. None of those schools has won a national title since.

In May 2004, Urban Meyer was months away from leading Utah, then a member of the Mountain West, to an undefeated season, setting himself up to take the Florida job.

Boise State was still in the WAC and TCU was in Conference USA – a decade away from nearly making the inaugural College Football Playoff.

Speaking of the College Football Playoff, the CFP’s TV deal with ESPN runs through the 2025 season. By 2031, the CFP field could potentially double in size, meaning Wisconsin’s trip to Virginia Tech, and vice versa the next season, could have national championship implications.

After all, we identified Virginia Tech and Wisconsin as two of the four most likely schools to be college football’s next first-time national champion.

Now it’s just a waiting game to see if, and when, Virginia Tech and Wisconsin actually fulfill the agreement that was verbally agreed to 15 years ago and isn’t scheduled to be completed until almost 15 years from now.

MORE: This Is How Much It Costs To Land One Of College Football’s Top Recruiting Classes