How the New 3-Point Line Has Affected Efficiency, Debut of NET Rankings Delayed

Welcome to the first edition of And One, my weekly college basketball column, which will be used to discuss the goings-on in the sport — hopefully everything from X’s and O’s to data visualizations, NCAA Tournament resumes and a whole lot more.

This week’s column covers the delay of the debut of the NET rankings (and why that was probably smart for the sake of reactionary fans and from a statistic perspective), a breakdown of a set that Kansas ran eight times against Duke (or at least a variation of it), why UCLA arguably provides Mick Cronin his most talented roster but a uniquely constructed one that could leave it vulnerable to 3-point shooters, and a look at how the extended 3-point line has affected the projected offensive and defensive efficiency ratings compared to years past.

This marks Year Two of the National Championship Arc, a concept I created last season. The SparkNotes description of the Championship Arc is that most national champions fit a similar profile in terms of having an elite offensive and defensive efficiency.

You’ll often hear that a team needs to rank in the top 20 or 25 on both offense and defense, and while that’s true, it’s not necessarily specific enough.

When I graphed the Final Four teams and national champions from 2002 to present based on their pre-NCAA Tournament adjusted offensive and defensive efficiency, according to kenpom.com, I found that most national champions are either generationally great on one end of the floor (2013 Louisville on defense, 2018 Villanova on offense) or they’re really good on both ends of the floor.

If you draw an arc from 2013 Louisville to 2018 Villanova, 13 of the last 18 national champions fall inside the arc and several others fall just outside. Before the NCAA Tournament last year, there were nine teams that fell inside the arc and all of them made the Sweet 16, five made the Elite Eight, two made the Final Four and Virginia won the national championship, so the concept held water in its first season.

While we acknowledge that there is an incredibly small sample size for us to go off of through the first week of the season (some Division I teams still hadn’t played a game as of Monday morning), only one team — Michigan State — is close to falling inside the Championship Arc, based on its adjusted offensive and defensive efficiency ratings from kenpom.com.

The red dots below show the top 10 teams on kenpom.com (through Tuesday night) compared to past Final Four teams (blue dots) and past national champions (gold stars) since the 2002 season. 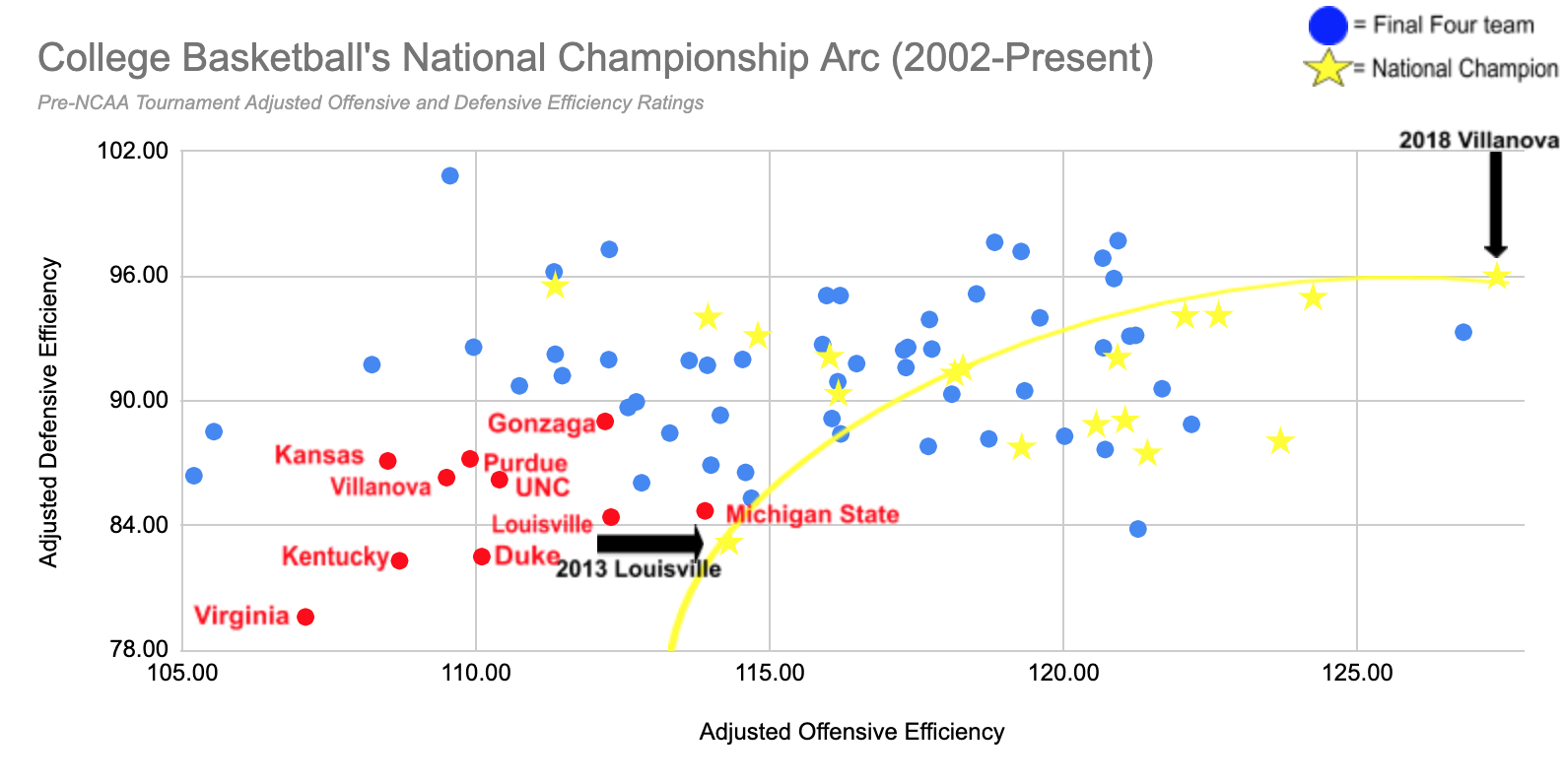 It’s worth noting that kenpom.com’s preseason ratings take into consideration a program’s last nine seasons, and preseason ratings are still factored into a team’s current rating, which is to say that there’s still a long way to go until we truly know what this season holds for the best teams in the country.

Ken Pomeroy, the namesake of kenpom.com, actually addressed this in a tweet on Tuesday.

Not too early at all. Offense and shooting will improve, but this will still end up as the worst offensive season (by points per possession) since the shot clock went to 30 https://t.co/6L78PFcpsX

I even had to adjust the y-axis to fit this year’s Virginia team on the scatter plot — the Cavaliers held each of their first two opponents to 34 points — and the ‘Hoos are one of three teams, along with Kentucky and Duke, that currently have a better adjusted defensive efficiency rating than the elite defensive squad of 2013 Louisville, which has been used as the defense-first goal post for graphing current teams in comparison to the Championship Arc.

NCAA Director of Media Coordination/Statistics David Worlock, who’s the Media Coordinator for the NCAA Tournament, tweeted on Friday that the NET rankings and team sheets will become public on Dec. 16, then updated daily through Selection Sunday.

Last year, the NET rankings made their debut on Nov. 26, so this will give college basketball fans and the privately held NET formula roughly 2.5 more weeks than last year, when people lost their minds when Ohio State started at No. 1 and Loyola Marymount was No. 10.

If you know anything about statistics, you know that a five-and-a-half-week sample size is going to be much more accurate than a three-week one, and I would guess that the public outcry from fans last November — even if it was misguided — had something to do with the later reveal this season.

I rewatched Kansas’ offensive possessions from its 68-66 loss to Duke in the Champions Classic and found eight possessions that the Jayhawks ran a double pindown set, or some variation of it, with bigs Udoka Azubuike and David McCormack setting pindown screens for Kansas’ wings.

The Jayhawks scored their first basket of the game off of it on a backdoor cut from Ochai Agbaji after Duke’s Jordan Goldwire and Cassius Stanley switched when Agbaji and Marcus Garrett crossed in the paint. Goldwire came to a jump stop, briefly turning his back to the baseline, allowing Agbaji to cut to the rim and receive a well-placed bounce pass from Azubuike.

Channeling my inner @hoopvision68, who you should definitely follow if you want to become smarter about basketball.

Sped through Duke-Kansas a second time and found eight possessions that KU used this double pindown set with Azubuike/McCormack. Led to eight points, one turnover. pic.twitter.com/02a5U4fOLu

Agbaji later burned Goldwire again on the exact same play early in the second half.

Including free throws scored off of fouls drawn from this action, Kansas scored eight points from this set and committed one turnover on a shot-clock violation on a possession when Duke doubled Azubuike.

Both in terms of this season and the near future, I’m curious to see what Mick Cronin’s tenure looks like at UCLA. He’s going to have more talented rosters than he’s ever had — the Bruins’ 2018 recruiting class alone includes four former four-star recruits who are on their current roster — so can his already stout defense get even better?

I watched UCLA’s season opener against Long Beach State, and the Bruins were at serious risk of starting 0-1. The Beach had a 57.3 percent chance of victory with five minutes remaining, according to kenpom.com.

Long Beach State made 9-of-19 threes while UCLA went 5-of-19. Washington transfer Michael Carter and Chance Hunter, who are 6-5 and 6-6, respectively, each made four 3-pointers and they’re the type of players — big wings or modern, small-ball fours — who could give the Bruins trouble from distance this season.

I’m intrigued to see what Mick Cronin (produced a top-30 defense annually since ’11) can do with the talent of UCLA.

On two of Carter’s threes, he was being defended by UCLA point guard Tyger Campbell, 5-11, and he was freed on a third one when Campbell was unable to fight through a ball screen at the top of the key.

On the other end of the height spectrum, Chris Smith (6-9) and Alex Olesinski (6-10), who have started both of UCLA’s games this season, as well as Cody Riley (6-9) and Jalen Hill (6-10), provide tremendous size, defensive rebounding and shot-blocking ability, especially when three of them share the floor at once, but they could be vulnerable to smaller, athletic wings who can shoot from outside.

Smith, especially, seemed vulnerable to shot fakes and ball fakes, one time falling to the ground on a jab step by Hunter and later getting put on skates on a crossover by Carter.

UCLA has a unique roster composition in regards to its size with only four players who are taller than 5-11 and shorter than 6-9 who have seen game action — but two of them have played less than 25 percent of the team’s available minutes.

The reality is that UCLA’s 3-point defense could be something to keep an eye on against players like Oregon’s Anthony Mathis (6-4, 9-of-13 from three), Arizona’s Josh Green (6-6, 5-of-11 from three) and Washington’s Nahziah Carter (6-6, 4-of-6 from three) in conference play if Tyger Campbell or one of UCLA’s bigs get switched on to them defensively.