Dylan Talley finally broke down, begging and pleading for the string of deaths to stop, wondering why he was always the one to find the dead bodies, the one performing CPR with no success.

“I’ve done it three times in the last month or so, and no one has come back to life,” said Talley, the former Nebraska standout who has played professionally in Europe since graduating in 2013.

On Friday, Talley found his 48-year-old mother, Yvette, unresponsive in her bedroom in Camden, New Jersey.

A couple days earlier, Dylan had noticed that Yvette’s leg was swollen, following a Mother’s Day celebration where she’d told him how much fun she had dancing and laughing with family. He tried to convince her to go to the hospital, but Yvette fought him. He picked up medicine for her the next afternoon, and when he came back later to get Yvette dinner, he found her.

Losing your mom just days after Mother’s Day would have been devastating enough. But Dylan Talley has experienced enough heartbreak in the past two and a half months to last a lifetime.

Not even a month before that, his brother, Donovon Guess, succumbed after what the family thought was an abscessed tooth turned out to be an infection that attacked his heart. Guess, a JUCO basketball All-American and Division I prospect, was 20 years old.

But this unthinkably tragic chapter began on Feb. 28 when Gwendolyn Talley, Yvette’s mom and a mother figure to Dylan, lost a battle with cancer that she had kept hidden from the family.

That’s four close family members Talley has had to bury in a span of 76 days.

The financial burden of helping with funeral arrangements for his relatives has fallen largely on Talley — all amid an inherently challenging time due to the COVID-19 pandemic. And that’s before you get to the emotional toll that Talley has suffered, which is incalculable.

“I’m always the one who finds the bodies,” he said.

Talley grew up in South Jersey, bouncing around between living with his grandmother in Pennsauken, his late grandfather in Mount Laurel, and his mother in Camden. His father was in and out of jail during his childhood, though Dylan saw him occasionally.

It was Gwendolyn, Dylan’s grandmother, whom he credits with taking care of him during his early years.

She was a major reason why he’d been able to play Division I college basketball, first at Binghamton and then at Nebraska. As a senior under Tim Miles in 2012-13, Talley averaged a team-high 13.7 points and 4.8 rebounds, earning an honorable mention All-Big Ten nod.

“He’s an unbelievable kid,” said Doc Sadler, who recruited Talley to Nebraska. “He always had a smile on his face.”

Dylan has fond memories of his grandmother, like when she’d host the whole family for holiday gatherings during Christmas and Easter. And thanks to her refusal to sugarcoat advice, she’d also become Dylan’s go-to family member for when he needed help solving a problem.

But Gwendolyn started to experience excruciating abdominal pain, and the 72-year-old, who hated hospitals, finally checked into Cooper University Hospital in February. The family believed she was there just to undergo hernia surgery.

They were in for a shock.

“She had cancer, but hid it from us,” Dylan said. “I didn’t know that until we were in the hospital. She didn’t tell anyone.”

Against the advice of the medical personnel, Gwendolyn checked herself out of the hospital and returned home to recover on Feb. 25. Three days later, she died in her home.

“It hit me hard,” Dylan said. “She was basically a mother to me.”

Dylan was still reeling from his grandmother’s death when the COVID-19 pandemic triggered national lockdown efforts in mid-March, but the presence of family helped him carry on.

One of the main reasons why 30-year-old Dylan had remained in New Jersey last fall, instead of continuing an overseas career spent mainly in Eastern Europe, was to keep an eye on his brother, Donovon Guess. 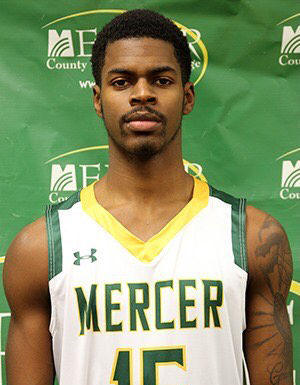 Guess averaged nearly 40 points per game at Leap Academy in Camden before spending two seasons at Mercer County Community College, where he became an NJCAA Division II All-American in 2018-19. Guess was taking classes this past year in order to graduate and become eligible to play Division I basketball in 2020-21.

Dylan, who is nearly a decade older than Guess, said he hadn’t even been aware of his younger brother’s talent on the court until late in his high school career. Having played overseas in countries like Germany, the Czech Republic, Luxembourg and Georgia, it was challenging for Dylan to watch his brother play in person.

One Christmas break, though, Dylan remembers coming back from Nebraska and watching Donovon put up 50 points against Pennsauken High.

“People were starting to compare him to me, and watching him that night reminded me of myself,” Dylan said. “I couldn’t believe how much better he’d gotten.”

Guess had been dealing with an abscess in his tooth through much of March, and it was finally Yvette who persuaded her youngest son to go to the hospital. Due to the coronavirus outbreak, Donovon visited a virtual health center and then quickly checked into Cooper University Hospital, the same place his grandmother had been admitted not even two months earlier.

But what sounded like a simple procedure wound up being far more complicated, according to Dylan, who said his brother spent nearly a week in the hospital before returning home with a swollen jaw.

A few days later, Donovon died in his sleep when the infection shut down his heart. Dylan found his brother when he went upstairs to check on him. He called 911 and tried to perform CPR, but it was too late.

“I was beyond devastated,” Dylan said. “That’s my little brother, and one of my best friends. It didn’t make any sense — I didn’t understand it.

Dylan has another younger brother, Louis Guess, and a 16-year-old sister, Infaney Gibbs, who gave birth to a son, Javonte, on Jan. 26.

“We didn’t know she was pregnant,” Dylan said of Infaney. “She didn’t even know.”

Yvette Talley nicknamed Javonte “King,” and helped her daughter take care of her new baby. Yvette, who was injured in an escalator malfunction while at work and forced to retire from her social services job in Camden after multiple surgeries to her neck, back and legs, was excited to help raise this surprise of a newborn.

Then, just a few days after celebrating Javonte’s three-month birthday, Dylan heard his sister screaming with terror from the third floor of their three-story apartment in the middle of the night.

Javonte “King” Burns died on May 1 of Sudden Infant Death Syndrome. Dylan and his family would have to attend a third funeral.

Stunned by the death of his nephew, Dylan called his best friend, Tayron Wells.

“This is a nightmare,” he told Wells. “There’s just no way it can get worse.”

Then his mother died.

After Yvette’s passing, DePaul assistant coach Marc Hsu, who recruited Dylan to Binghamton when he was on staff, helped set up a GoFundMe for Dylan’s family. While the page has currently raised a little over $10,000, that money just scratches the surface of what the family needs for four different sets of funeral arrangements in less than a three-month span.

Dylan had been working at a warehouse over the past year while he was home, but that job has been shut down due to safety concerns during the pandemic.

“We have no money,” Dylan said. “All of this was unexpected, and I can’t even work.”

Meanwhile, Talley is understandably numb. He’s attempting to process it all.

“This is just a nightmare,” he added.

“A complete nightmare. I don’t even know what to do anymore.”