This is how polling in the Ivy League shook out among coaches who voted, with one being the best and 8 being the worst: 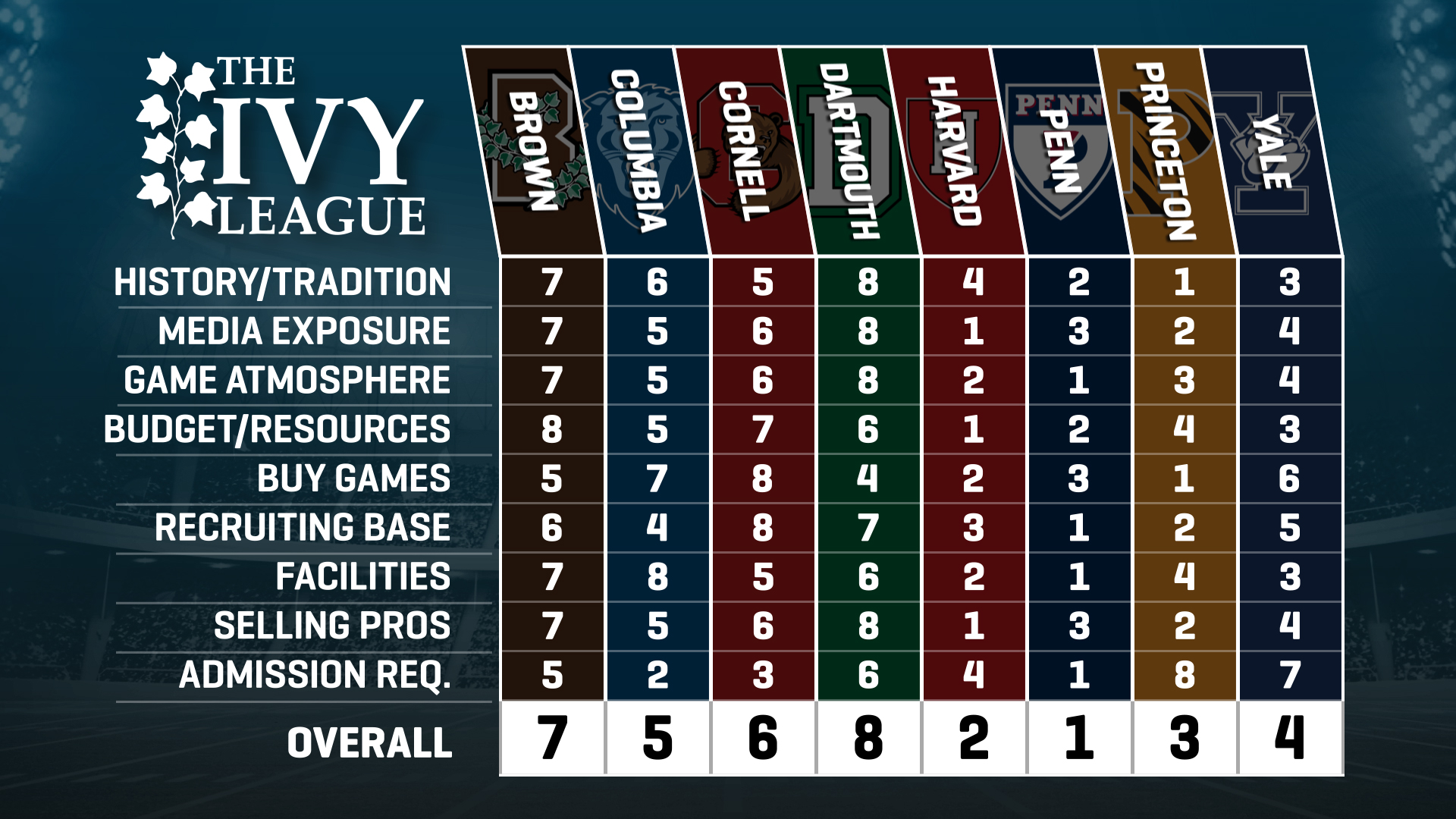 1. Penn (64) – The Quakers went to the Final 4 in 1979, and have gone to three Elite Eights and a handful of Sweet 16s. Penn has won 26 Ivy League regular-season titles, and after a lengthy NCAA tourney drought, the Quakers went for the first time since 2007 last season under Steve Donahue. The Quakers rank in the top three in all nine categories.

Where they win: “The Palestra, the Big 5, history and support.” – Ivy assistant coach

The knock: “You always have a tough non-conference schedule because of the Big 5.” – Ivy head coach

2. Harvard (61) – The Crimson have been terrific over the past decade or so, but there wasn’t a ton of success prior to the arrival of Tommy Amaker. Harvard has gone to the NCAA tourney four times in the past seven years after not going since 1946. Harvard also won a share of the Ivy League title in 2010-11 – the first since the league was formed in 1956-57.

Where they win: “It’s Harvard. The name speaks for itself. Parents want their kids to go to Harvard because of the name.” – Ivy assistant coach

The knock: “There’s not much — especially with them upgrading their arena. It was a dump before, and now it’s decent.” – Ivy League head coach

3. Princeton (54) – The program has a ton of success, going to 24 NCAA tournaments and a Final Four in 1965. The Tigers had it rolling under Pete Carril (1967-1996) and Bill Carmody (1996-2000), and also went to a pair of NCAA tourneys under John Thompson III. Carmody’s 1997-98 team was ranked seventh in the country at one point and earned a No. 5 seed in the NCAA tourney. However, Princeton hasn’t been nearly as dominant over the past decade or so, going to a pair of NCAA tournaments in the past 14 years.

Where they win: “The university is ranked No. 1 by US News & World Report for eight straight years. Great campus and terrific basketball tradition.” – Ivy League assistant

The knock: “Admission requirements. They are the toughest in the league.” – Ivy League head coach

4. Yale (42) – The Bulldogs have gone to the NCAA tourney four times – in 1949, 1957, 1962 and 2016. James Jones won the Ivy outright in 2016 and advanced to the NCAA tourney for the first time in 54 years, and then wound up upsetting Baylor in the first round. However, there hasn’t been much high-level success in the program until recently.

Where they win: “Central location in the northeast close to everything, one of the best universities in the world with brand-name recognition to go anywhere, and they have had some recent success.” – Ivy assistant coach

The knock: “Lack of tradition and going against brand names.” – Ivy League assistant

6. Cornell (27) – When Steve Donahue took the Big Red to the NCAA tourney in 2008, it was the first trip in two decades. Cornell went three straight years, but hasn’t been since. Not only that, the program hasn’t had a winning record since 2010. Cornell ranks dead last in two of the nine categories.

Where they win: “Big campus and college town feel that’s unique within the league. It’s almost like a Big Ten-type of feel as a school.” – Ivy assistant coach

The knock: “The location. The campus is nice, but it’s hard to get any kids to visit. It’s four hours from everything.” – Ivy assistant coach

7. Brown (24) – There have been just a pair of NCAA tourney appearances – in 1939 and 1986. Since 1986, there have been just five seasons with a winning record, including a three-year run from 2000-03 under Glen Miller. Brown ranks in the bottom two in six of the nine categories.

The knock: “Lack of tradition, facilities and not enough resources. It’s a tough job, one of the most difficult in the league.” – Ivy assistant coach

8. Dartmouth (20) – The Big Green haven’t had a winning record since 1999 when they went 14-12 overall and 10-4 in Ivy play under Dave Faucher. Dartmouth ranks dead last in four of the nine categories, and is considered the most difficult job in the league.

Where they win: “Probably the lack of expectations. No one expects anything, so anything you do is a bonus.” – Ivy League head coach

The knock: “Location. It’s literally in the middle of nowhere.” – Ivy assistant coach