The NBA Draft is finally upon us. This is my fourth and final mock draft, featuring my third different No. 1 pick — but I have Georgia’s Anthony Edwards being the first name called.

This year’s draft is short on transcendent talent, but here’s what I see each team doing in the first round.

It’s not an easy decision for Gersson Rosas and the T-Wolves, but ultimately Edwards has too much natural ability to pass on here. He’s a big, strong, powerful, athletic guard who was extremely erratic and inefficient as a freshman at Georgia, but he’s also got a ton of upside. Edwards only shot 40 percent from the field and 29 percent from 3, and there are also some off-court concerns from NBA teams. However, he’s a guy who has great size and an NBA-ready body for a wing — and he should be able to get buckets quickly in the NBA.

He only played three games at Memphis due to an NCAA-imposed suspension, but it was clear that he’s different than just about everyone else. He’s a legit 7-foot-1, runs the floor extremely well and can be an impact guy on the defensive end due to his ability to rebound and block/alter shots. Bob Myers will likely try and move this pick and a $17 million trade exception for an established player, but if he can’t, Wiseman makes sense to pair with Steph, Klay, Draymond and Wiggins.

You can’t teach his court vision and passing ability, but there are concerns about the youngest Ball brother — ranging from the shooting mechanics, inefficiency and selection with his perimeter shot (he shot 25 percent from 3 this past season) to his lack of interest on the defensive end. But Ball does have high, high upside and is worth rolling the dice for the Hornets because he’s a point guard with length who can score and also make his teammates better.

He’s a versatile forward who possesses a high IQ, is athletic and can really pass the ball. The concern comes with his ability to shoot the ball, but that’s also the area in which guys can improve easily with work. New GM Arturas Karnishovas has some pieces in place, and Avdija can give new coach Billy Donovan another weapon to try and get the Bulls back in the postseason.

Toppin was the National Player of the Year this past season at Dayton, and many NBA execs view him as maybe the safest pick. He’s an athletic forward who thrives in transition, and showed he can step out and make shots from the perimeter, but there are concerns about him on the defensive end. He isn’t in the conversation for the No. 1 pick, but the Cavs could certainly use someone like him up front after taking Collin Sexton and Darius Garland the last two years.

The Hawks need guys who can defend, and there may be no better guy in this year’s draft on that end than Okoro. He’s an elite defensive wing who will bring a high IQ to the table and also will be dangerous in the open court. The big question is whether he’ll develop a reliable perimeter shot. If he does, he could be an All-Star caliber player.

Don’t worry about his numbers as a freshman. They were modest, but he played on a Florida State team that plays a ton of guys. Williams is a versatile forward who can play in the NBA immediately due to his size, strength, athleticism and willingness to defend. He’s got a high ceiling as his offensive game evolves. The Pistons need talent, and Williams could wind up being the best player in this draft one day.

Haliburton is a pass-first floor leader whose shot mechanics aren’t picturesque, but he’s shot it extremely well in his two seasons in college — and it’s no secret the Knicks are desperate for a point guard. He’s long and lanky, and not a high-end athlete, but he’s a guy who makes quality decisions. The keys for Haliburton are strength and his ability to get past defenders and finish around the rim.

Wizards GM Tommy Sheppard would be ecstatic if Okongwu is still on the board here. He’s got Bradley Beal and John Wall, and took Rui Hachimura last year. He needs a hard-playing big, and that’s exactly what Okongwu is. He wasn’t guaranteed to be a one-and-done guy, but he was so productive in his lone season at USC that he quickly turned into a guy who could leave after one season. Okongwu will be a quality rebounder in the NBA and also should be a high-end defender due to his ability to switch and also protect the rim.

The worry was that Achiuwa wanted to show he was a small forward last season as a freshman at Memphis, but that wasn’t the case — especially after James Wiseman decided to leave after playing just three games. Achiuwa is an athletic power forward who plays hard, rebounds and runs the court well for someone his size. The hope is that he’s a Bam Adebayo-type. Deandre Ayton and Achiuwa could be a tough 1-2 punch up front.

Vastly under-recruited coming out of high school, Vassell is one of the best pure shooters in the draft, and he’s also a guy who can really defend at a high level. He made a jump this past season at Florida State and should be a guy who can fill a need on the wing as an NBA starter due to his ability to space the floor and also guard.

The Kings could use another floor spacer and that’s exactly what Nesmith will bring to the table, but he’s more than just a one-dimensional shooter. He can also put it on the floor, and defend. Nesmith only played 14 games last season due to injury, but he shot a sizzling 52 percent from deep and that will translate to the next level.

David Griffin gets a high IQ, versatile wing who can shoot it and defend. He’s a guy that won’t blow you away, but you can throw out on the floor and he can help in several different ways – including spacing the court around a guy like Zion Williamson.

Kemba Walker has been banged-up the last year or so, and Danny Ainge needs to make sure he’s got someone in place in case Walker gets hurt. Lewis has game-changing speed, an improved jump shot and can both find his teammates and score in a variety of ways.

The Magic need a front-line point guard, and Hayes could be just that down the road. He isn’t a great athlete, but he’s a point guard who has good size and just knows how to play. He knows what decisions to make with the ball in his hands. The concern, however, is whether he can make enough shots to be a high-end floor leader in the NBA.

The Rockets could be on the verge of a rebuild, and they need to swing. Hampton has a tremendous amount of ability, but he’s not ready — physically. He went to New Zealand last season, and he’s a versatile guard whose biggest weakness is his strength and shooting ability.

If you are the T-Wolves, roll the dice on this long and talented big man from Greece. It’ll take some time for him to fill out, but he’s got incredible upside. He’s a long, skilled frontcourt player with a 7-foot-3 wingspan that could wind up being a nice complement to Karl Anthony-Towns up front.

Maxey is an interesting case because he’s a small off-guard who doesn’t shoot it great. He showed glimpses last season at Kentucky, but was inconsistent. He’s a guy who is best at getting into the lane, but he’ll need to become a more consistent shooter from deep in order to become an NBA starter. The Mavericks could take a chance, hoping that Maxey is a guy who can help put up points, even coming off the bench.

He was considered one of the top incoming freshmen a year ago, but he battled through injuries and some inefficiency. Anthony has an alpha-dog mentality and would be best coming off the bench on a second unit, where he could be utilized as more of a scorer. Anthony has to work on his efficiency from deep and learn to become more of a point guard who sets up his teammates.

If there’s an organization that could take a chance on a guy like McDaniels, it’s the Miami Heat. McDaniels looks the part; he’s long and skilled, but there are red flags with his motor and his attitude. There are some who think he will be a star, and many others who feel as though he could be out of the league in a few years.

It may look like a reach, but the Sixers desperately need a wing who can shoot it, and Bane shot 43 percent (249-575) from three over his four-year career in the Big 12. Bane is a big, strong guard who would be ideal for a 76ers team that has to add shooters.

Smith is a combo forward who would give the Nuggets even more versatility. He’s athletic, runs the court well and is able to score around the basket and also from mid-range.

Bolmaro is a wing forward with size who needs to improve his perimeter shot, but can make plays off the bounce and also knows how to set his teammates up with his passing ability. It’ll likely take time for Bolmaro, but he’ll probably go somewhere in the back half of the first round.

You won’t find many big men who play harder than Stewart. What he does is score in the paint, rebound at a high level and know his role. Stewart can bring energy, toughness, and a big-time rebounder to the Pelicans.

Tillman is a smart, versatile big man who is terrific in ball-screen situations – both on the offensive and defensive end of the court. New coach Mark Daignault can throw Tillman on the floor immediately and he’ll have someone who can help on the second unit.

The Celtics have some decent bigs in Daniel Theis and Robert Williams, but Nnaji could wind up better than both. He’s long, plays hard and has made huge strides the last couple of years. He’s certainly worth the risk for the Celtics at No. 26.

The Washington State transfer was terrific last season in leading the Aztecs to a Top 10 ranking all year long. He scored from deep, he got into the lane and finished, and also made life easier for his teammates. The Jazz need to get younger at the point guard position, and Flynn can learn from Mike Conley.

Green is an athletic wing originally from Australia who can become an elite defender, and he’s shown the ability to thrive in transition and knock down enough shots from the perimeter to keep defenses honest.

He’s a guy who can play both backcourt positions and just does everything well — but nothing spectacular. He would give the Raptors more length in the backcourt, especially if they lose Fred VanVleet. He’s a cerebral player who could help the Raptors in a variety of ways.

Oturu made a huge jump and had a heck of a season. He’s long, skilled, mobile and has a high ceiling. He can score inside and out. Danny Ainge loves multi-dimensional forwards, so why not take a shot here — if the Celtics keep the pick. 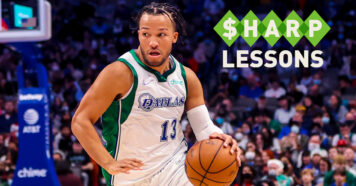 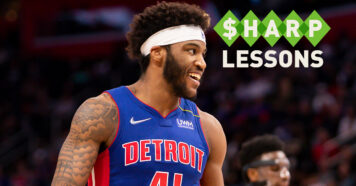