These conference tournaments will provide teams the opportunity to earn automatic bids to the NCAA Tournament and bolster their resumes with neutral-court wins. For one team, it could mark the start of a long undefeated run to end the season that includes both a conference tournament title and a national championship, which is something Villanova accomplished last season.

Most conference tournaments, at least for high-major conferences, require teams to play on consecutive days until they lose or until they win the tournament title. For many teams, it might be the only time all season that they have games on back-to-back days.

One-day turnarounds can’t be found in the NCAA Tournament.

So we wondered, which coaches that lead the best teams in the country this season have the best history of success in coaching games after a one-day turnaround?

We examined every coach whose team is currently ranked in the AP Top 25 and calculated his win/loss record in games that immediately followed a game played the previous day.

Of course, the most common source of one-day turnarounds in college basketball are conference tournaments, where teams have the potential to play games on up to five consecutive days. But early season non-conference events, such as the Maui Invitational where teams play three games in three days, also provide opportunities for coaches to scout their next opponent, develop a game plan and get their teams ready on a one-day turnaround.

The following chart shows how coaches of teams that are currently ranked in the AP Top 25 have fared in games after a one-day turnaround. Winning percentage is graphed on the X-axis, while the number of games is on the Y-axis. 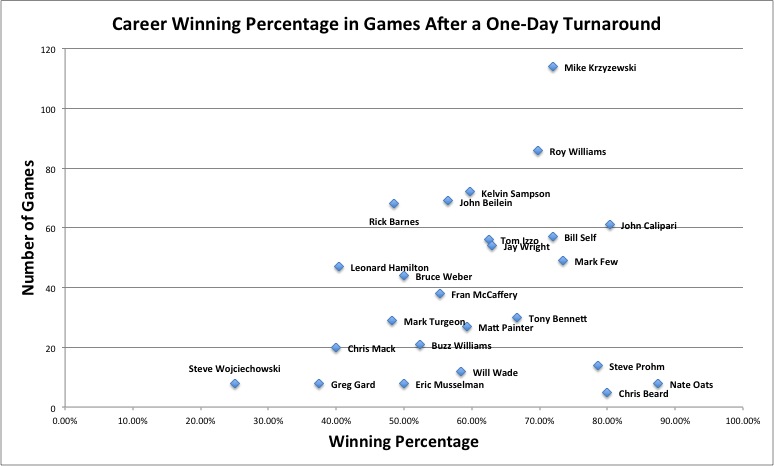 Seventeen coaches whose teams are currently ranked in the AP poll have won more than half of their games after a one-day turnaround. Buffalo Coach Nate Oats, who’s in his fourth season with the Bulls, leads all coaches in this study with an 87.5 percent winning percentage, although he has coached in just eight such games. Time will tell if he can maintain a John Calipari-esque trajectory as the Kentucky coach has won 80.3 percent of his teams’ 61 games following a one-day turnaround.

It shouldn’t be a surprise that the upper-right quadrant of the chart above includes some of college basketball’s most successful coaches. Duke Coach Mike Krzyzewski has coached in 114 games after a one-day turnaround – almost 30 more than North Carolina Coach Roy Williams, who has the second-highest total among this group of coaches – and he has won roughly 72 percent of them.

Williams isn’t far off with a 69.7 percent winning percentage.

Here’s the data from the chart above listed in a data table format, listed in descending order of win percentage.

Nineteen of the 25 coaches have won at least one conference tournament, led by John Calipari and Mark Few with 15 titles apiece. In total, this group has won 94 conference tournament titles and it’s very likely that the coaches of the teams that win this season’s ACC, Big 12, Big East, Big Ten and SEC are listed above.

Buffalo, Gonzaga, Houston and Nevada will likely be the favorites in the MAC, WCC, AAC and Mountain West tournaments, respectively. 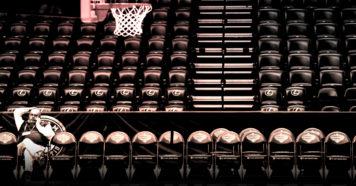 “I’m cautiously optimistic,” said one AD. “But let’s be honest. It’s probably going to depend on whether or not we have football.”