Justin Verlander had 45 minutes to make one of the biggest decisions of his life.

After debating a trade for months, the Tigers had agreed to give up their star pitcher to the Astros in exchange for a handful of prospects just hours before the August 31 waiver-trade deadline. Both teams would get what they wanted; the Tigers could start their rebuild, while the Astros would acquire a pitcher that could be a pivotal piece in a World Series run.

All Verlander had to do was say yes.

“I hadn’t heard anything all day,” Verlander told Jayson Stark in the latest episode of Baseball Stories, “and sure enough my phone rings and it was [Tigers GM Al Avila] saying, ‘You’ve been traded to the Houston Astros. You need to decide whether you want to waive your no-trade clause.’”

Things were going just fine for Verlander in Detroit. He’d been to two World Series and had a Rookie of the Year, MVP and Cy Young on his resume. He was signed through 2019, earning $28 million a year.

But despite his accomplishments, he never quite looked like the pitcher who took the mound when he started his career. After his Cy Young-winning 2.40 ERA in 2011, his ERA hovered over the 3.00 mark. Sure, his numbers weren’t bad, but they certainly weren’t going to win him the MVP again on a Tigers team that hadn’t seen the postseason since 2014.

Why stay and lose for the unforeseeable future with a playoff-bound team beckoning?

With seconds to spare, Verlander agreed to waive his no-trade clause and move to Houston after 13 seasons in Detroit.

It ended up being a perfect fit.

Thank you to Detroit for an incredible 13-seasons, a city that will always be important to me. But now I couldn’t be more excited to join the Astros and am looking forward to getting started right away. I am committed to making an impact off the field, especially during such difficult times. My Foundation, Wins for Warriors, will continue to do the great work we have started in Detroit, but will also expand to Houston effective immediately and get involved with aiding the #HurricaneHarvey disaster relief efforts. @winsforwarriors

No one saw the trade coming. Sure, the Tigers had made it clear they were gearing up for a rebuild and shopping their ace, but Verlander had only agreed to waive his no-trade clause for the Dodgers (he and his wife, Kate Upton, have a home in Los Angeles), or the Cubs. The Dodgers, who had recently acquired Yu Darvish, weren’t interested, and the Cubs didn’t have the farm system to give the Tigers what they wanted.

“Could you ever have envisioned what was about to unfold that day?” Stark asked Verlander.

“To be honest, no,” he responded. That morning I woke up and I had been in conversation with Al Avila, our general manager, and I knew that it looked like the prospects of me getting traded were pretty slim.”

The Astros weren’t exactly desperate for a pitcher — an expensive one at that — when they acquired Verlander. At 80-53, they had the best record in the American League, and had Carlos Correa and Jose Altuve lighting up the middle of the batting order.

Not to mention that the Astros and general manager Jeff Luhnow weren’t chomping at the bit to give up any of their coveted prospects, especially not pitcher Franklin Perez, who had been off the table for all previous trade talks.

But Luhnow was looking for that ace to bolster his rotation, led by Dallas Keuchel and Lance McCullers Jr., but with unsteady fourth and fifth options. As the team careened towards the postseason, it was clear: Verlander was his man.

While Verlander didn’t have a standout 2017 season with the Tigers, his numbers in the seven games before the trade cemented the Astros’ interest in acquiring him. He compiled 56 strikeouts in 48 innings with a 2.06 ERA in those starts.

Just the type of stability Houston was looking for during a playoff push. And just the right time for the city of Houston, which had been decimated by Hurricane Harvey just days prior to the trade.

“I think it will bring hope,’’ head coach A.J. Hinch told reporters at the time, “something to look forward to while we rebuild the city, and rebuild parts of the city that some of us can’t fathom that’s been destroyed. We are a baseball team. We will keep it in proper perspective, and provide entertainment for a lot of people in our community.

“I think this team will work really hard to make this city proud, make this city feel good when there are a lot of people going through tough times.’’

In his final regular season appearances before the playoffs, Verlander went 5-0 with 43 strikeouts in 34 innings, earning a 1.06 ERA.

His playoff performance was equally impressive, winning four of the five games he started with just nine earned runs and 38 strikeouts. His playoff run included a 13-strikeout complete game against the Yankees in Game 2 of the ALCS.

After 13 seasons with the Tigers, after just two months as an Astro, Verlander finally got his World Series ring. 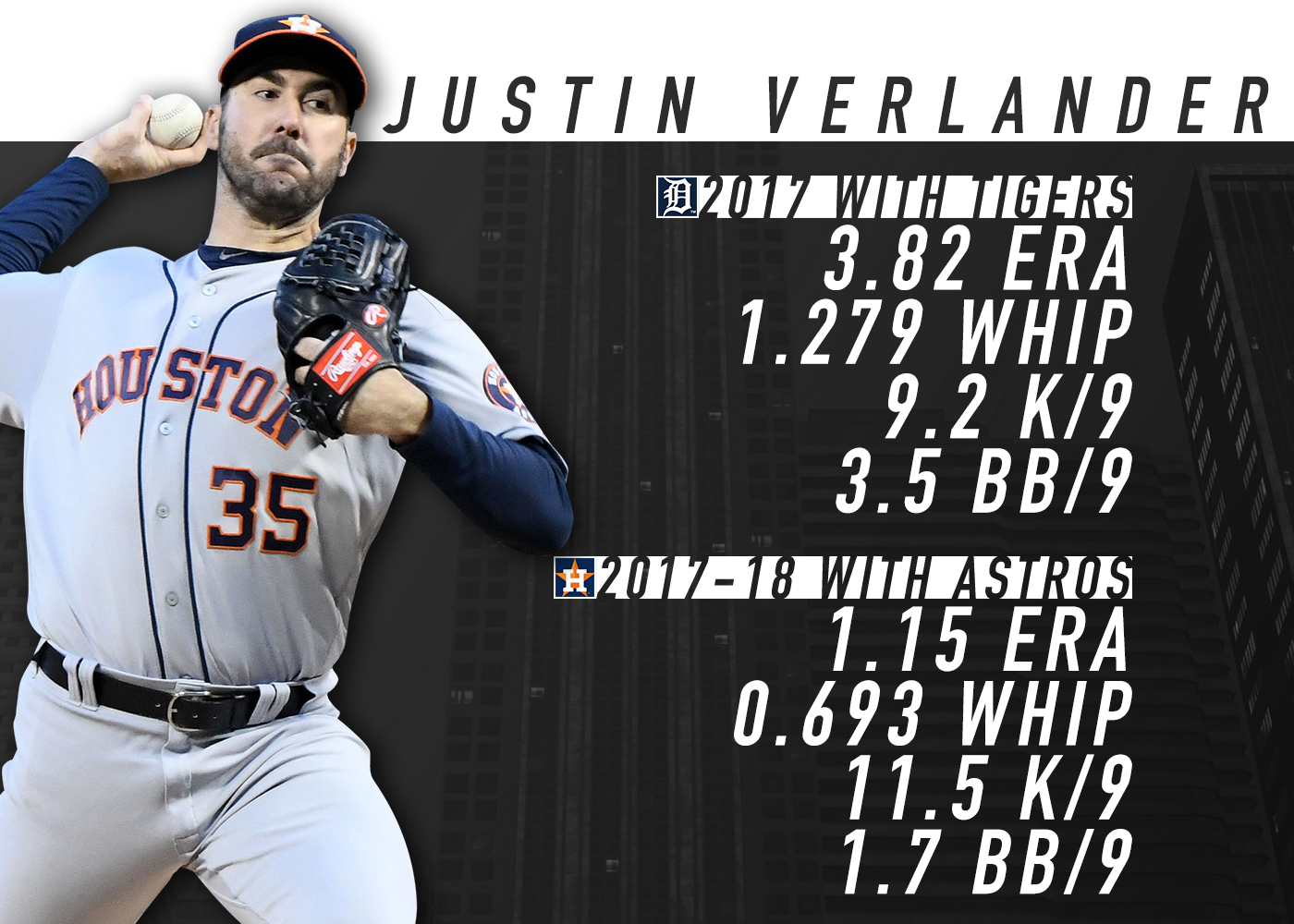 This season, Verlander looks even better. With a league-leading 1.05 ERA and 0.714 WHIP, he’s on pace to win his second Cy Young at age 35. After 10 starts, he has a career-high strikeouts per nine and career-low walks per nine.

He has also switched some things up with his pitch selection. He didn’t implement a slider until his fifth season in the league, but is now throwing one every fourth pitch. He’s also been throwing his changeup and curveball less than ever, just 1.8 and 13.2 percent of the time, respectively.

He may be 35 now, but the changes he’s made make him lethal as the Astros march towards repeating as World Series champs.

But the last-minute trade didn’t just help Verlander flourish. It was the final piece of a years-long rebuild for a team who lost nearly 600 games between 2009 and ’14. 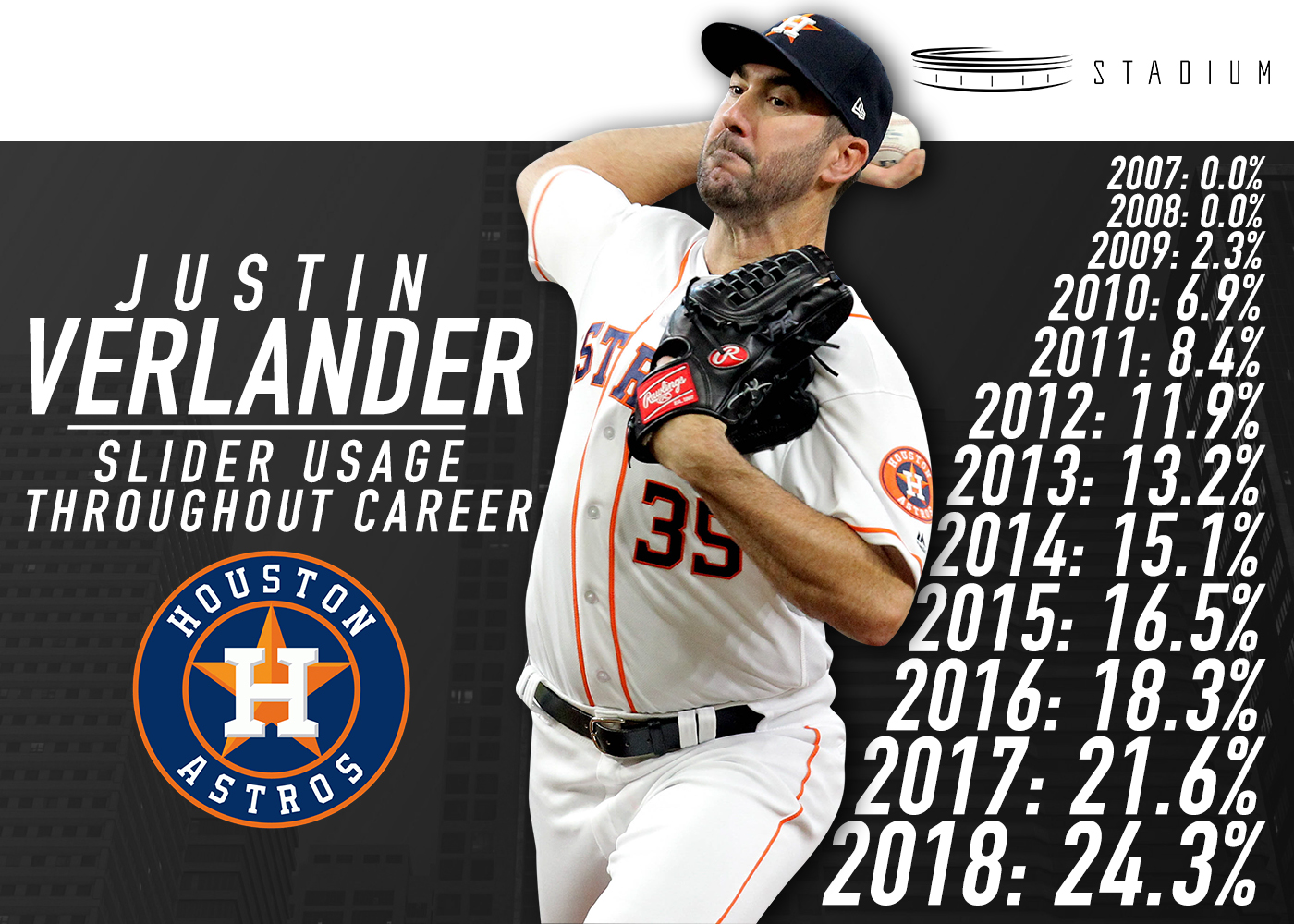 Only four Astros currently remain on the roster from the pre-2014 days: Altuve, Marwin Gonzalez, Keuchel and Brad Peacock. A few players, they let walk or retire. Everyone else? Traded away for prospects or picks, three of whom wound up being traded to the Tigers for Verlander.

But while the team was flopping, Houston’s farm system was thriving, producing George Springer, Correa, Keuchel, McCullers and Chris Devenski. After hiring manager A.J. Hinch, the team went 86-76 in 2015 and reached the postseason for the first time since 2005. The run was bolstered by Keuchel’s Cy Young Award-winning season and a Rookie of the Year performance by 2012 top pick Carlos Correa.

Fast forward two years, and the Astros’ home-grown players are some of the best in baseball. The money they saved helped them pay for players like Carlos Beltran and Josh Reddick. They had everything they needed — except a shutdown ace.

And to think, after six years of rebuilding, the final piece was added with just two minutes to spare.