Kansas’ Silvio De Sousa Is Guilty, But Worthy of a Second Chance

I’m not here to make Silvio De Sousa into the victim. He’s more than deserving of a lengthy suspension after throwing punches and waving a photographer’s stool over his head in the midst of Tuesday night’s melee against Kansas State.

Kansas’ junior big man made a mistake, but let’s not crucify him and send him packing from college basketball.

Talk to just about anyone who has come across De Sousa, whether it’s in high school, on the AAU circuit or at Kansas, and they’ll say the same thing:

“He’s a great kid,” they repeated.

“One of the best teammates you could have,” another person told me.

Should De Sousa have stood over K-State guard DaJuan Gordon, taunting the freshman, after blocking his last-second layup with a 20-plus point lead?

Heck no, but De Sousa wasn’t going to allow Gordon to show him up, not after a Monmouth player did it to Kansas earlier this season in the closing moments, and certainly not after De Sousa has seen his role decrease to the point where he played a total of four minutes in the previous two games.

This may have been resolved quickly if De Sousa was hit with a technical for taunting, forcing the altercation to never escalate beyond the yapping stage. Instead, Kansas State had a couple players storm in to defend their teammate — and that’s when all hell broke loose. The trash-talking turned to shoving and then fists were flying.

It’s still unclear who threw the first punch, but through one camera angle it looked as though Kansas State freshman Antonio Gordon was the guilty party after running off the bench. There are some who will claim that De Sousa was just defending himself, others will say he was the aggressor.

But regardless of your view, it all changed when De Sousa lifted the stool.

It wasn’t the thrown haymakers that people will remember; instead, the defining image will be De Sousa holding the seat up high with everyone in the vicinity shell-shocked about what might lie ahead as his next move.

Did cooler heads prevail with De Sousa or did someone grab the stool? That’s also somewhat hazy from the video, but whatever the case, thankfully he didn’t swing the stool and make contact with anyone.

After seeing this video from several different angles, this one in particular makes me think Silvio De Sousa was reacting to being engaged as opposed to initiating the brawl. pic.twitter.com/2IGIay4HsO

The silver lining in all this is that it was a blowout, so those that were in the handicapped section were already on their way out of the building by the time the final buzzer sounded. Fortunately for Bill Self and Kansas, no bystander was injured because that would have escalated this to another level.

But now Kansas will have to deal with the aftermath. On the court, the loss of De Sousa won’t really affect the Jayhawks since the once-heralded recruit has now become an afterthought in KU’s hopes and plans of winning a national title this season.

Maybe it’s an earlier conversation I had with current Los Angeles Lakers big man DeMarcus Cousins in the locker room prior to Monday’s matchup against the Boston Celtics that allowed me to see this incident with a different lens than I would have in the past.

You see, I’ve watched Cousins since he was a sophomore in high school, and I haven’t been shy to criticize his every move over the years.

We talked about some of the mistakes he made when he was younger, and how he can’t shed the reputation no matter what he does. While Cousins and De Sousa are obviously different players and different people, they have both made mistakes at a young age.

Let them try and learn from them.

According to multiple sources, De Sousa is extremely remorseful for what he’s done, even shedding tears for his actions on Tuesday night. The Angola native has already dealt with plenty of adversity throughout his college career, missing a full season due to an NCAA suspension in which his mentor/guardian was caught taking money from an Adidas rep.

There was no evidence that De Sousa had any knowledge of involvement. In fact, the NCAA reduced what had been a two-year suspension to one season after Kansas’ appeal on the basis that De Sousa had no clue what was going on with his mentor taking money.

But he suffered the consequences, missing an entire season for something he couldn’t control. The former Top 50 recruit who played 26 minutes and grabbed 10 boards in an Elite Eight win over Duke in 2018 hasn’t looked anything close to that player since that game.

Now his reputation has taken another hit, this time one with merit.

A suspension is absolutely warranted, but let’s give De Sousa a break. He knows he screwed up, but there’s no reason to permanently remove him from college basketball.

Instead, let’s give him an opportunity to try and learn from his mistake. 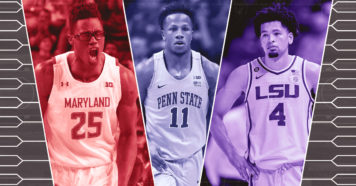 The current top 16 will be revealed Saturday. Here’s what we think it will look like. 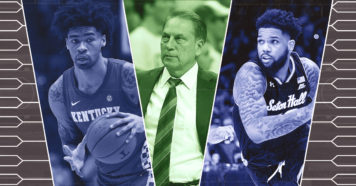 Why Michigan State earned a top-16 seed on Saturday, why they couldn’t keep it by Monday, and much more. 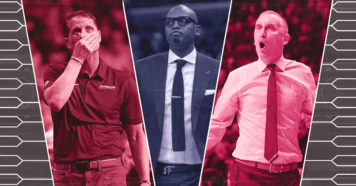 NCAA Tournament Projections As of Feb. 14

We always think this year’s bubble is the weakest it’s ever been. But this year… it really might be.