Earning a double bye in the Big Ten tournament likely would lock up an NCAA Tournament berth for a bubble team. We examine which squads need it most and delve into the weekend action in this edition of Livin’ B1G.

I’ll admit it’s a bit depressing that it’s late February and we can say that only three Big Ten teams are locks for the NCAA Tournament. That’s the reality we’re facing, though, and why it makes the upcoming Big Ten tournament one of the league’s most important in years.

The double bye, given to the top four league finishers since the Big Ten expanded to 14 teams, likely will be the measuring stick between having to fight for your NCAA Tournament life in Washington, D.C., and already having a bid secured prior to the first game tipping off. And the race is close.

Purdue, Wisconsin and Maryland are going dancing no matter how things play out over the last four regular-season games, and they currently hold the first three spots atop the conference. Depending on who you talk to, the teams fighting for fourth need that last double-bye position to guarantee a spot in the NCAA Tournament. Here’s a look at the contenders.

Northwestern is sitting in fourth place, and as of right now the Wildcats would be making their first-ever NCAA Tournament appearance. But as great of a story as that would be, the ‘Cats can’t afford to go winless — or even 1-3 — during the final stretch or the committee will have some thinking to do, especially if they don’t have a decent showing in D.C.

The Wildcats lost three of their previous four with double-digit defeats to Purdue and Maryland before surviving a tough 69-65 battle with last-place Rutgers on Saturday at home. Leading scorer Scottie Lindsey returned after a four-game absence, but his conditioning after dealing with mononucleosis still has to come around. Northwestern is looking good but isn’t out of the woods yet, and securing a top-four finish would remove any doubt from its NCAA Tournament fate.

Michigan State has been playing shorthanded all season with big men Gavin Schilling and Ben Carter sitting out the entire year. Star freshman Miles Bridges missed time with an ankle injury, and now the Spartans have to go the remainder of the season without senior Eron Harris, who will undergo knee surgery after being hurt Saturday against Purdue.

While those setbacks are valid excuses, that doesn’t mean the committee will give coach Tom Izzo his 20th consecutive NCAA Tournament berth. The Spartans have losses to Arizona, Kentucky, Baylor and Duke that came during a rigorous early schedule, but they also suffered a home loss to Northeastern and barely beat Florida Gulf Coast and Oral Roberts. Big Ten losses to Penn State and Ohio State don’t help, nor does being blown out by Indiana, Michigan and Purdue recently.

Michigan State needs to get some production out of Matt McQuaid with Harris out, rally around Bridges and finish strong to get a double-bye in D.C. and give the committee a reason to put it in the 68-team field. Holding tiebreakers over Northwestern and Minnesota helps.

The Gophers’ current five-game winning streak likely has them in the field at the moment, although four of those wins came against teams that will be watching the NCAA Tournament from their couches. The latest came Sunday in overtime against a Michigan team that’s not a lock for a berth, either. Not faltering at home against Penn State and Nebraska becomes even more important for the Gophers with road games against Maryland and Wisconsin still on the slate.

Minnesota looks fairly safe, though, with some projections having it as high as a No. 6 in the Tournament. But a rough go of it down the stretch and early exit in the Big Ten tournament could have the committee rethinking its status.

Record: 17-10, 7-7
Remaining games: at Rutgers, Purdue, at Northwestern, at Nebraska

The Wolverines and Spartans need the double bye the most to secure an NCAA Tournament berth. The schedule makers didn’t do Michigan any favors by sending it on the road for four of its last five regular-season games, but at least the toughest of the stretch against Purdue will be at home.

Michigan didn’t help its cause with that loss to Minnesota and needs to regroup fast. Finishing with an impressive mark with all those road games will certainly help the Wolverines’ chances for the double bye and a Tournament appearance. 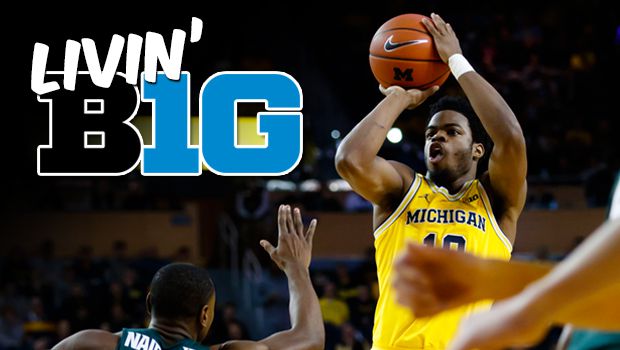 … Maryland coach Mark Turgeon came under fire for leaving Melo Trimble on the bench for the final 4:32 of the Terps’ 71-60 loss at Wisconsin on Sunday, but he had a reason behind it. Trimble scored 27 points and came out for good after missing the front end of two one-and-one opportunities.

“He was tired,” Turgeon said at his postgame press conference. “If we would’ve made some kind of a run on them, I would’ve went back with him. But we have four games in 10 days. Wisconsin was in total control of the game, so that’s why I did it.”

Trimble has played at least 30 minutes in 13 straight games for Maryland, which is 22-5 overall and 10-4 in the Big Ten, one game behind the Badgers and Purdue. The Terps have no more than two days off between games until getting a four-day break between contests against Rutgers (Feb. 28) and Michigan State (March 5).

… Eron Harris’ knee injury, which occurred during the Spartans’ 80-63 loss at Purdue on Saturday, is an awful way for the fifth-year senior to end his college career. An MRI revealed significant damage, but it was clear there was a major problem before Michigan State released the official word Sunday.

Watching Miles Bridges openly cry on the court for his fallen teammate was a touching and heartbreaking moment for a Michigan State squad that’s already gone through plenty of adversity. Get well soon, Eron.

… Indiana certainly needed the five-day break between games before facing Iowa on Tuesday. The Hoosiers currently sit at 15-12 overall and 5-9 in the conference, and only a miracle run to end the regular season and into the Big Ten tournament will help them get a shot at the Big Dance.

Indiana, much like Michigan State, has dealt with significant injuries, leading to some fans calling for Tom Crean’s job. NIT berths don’t cut it in Bloomington, but Crean has been working with a make-shift team with O.G. Anunoby out for the year and James Blackmon Jr. missing some time. We might want to give Crean a break.