Livin’ B1G: Sweet, But Not Quite Elite

Wisconsin, Purdue and Michigan made runs to the Sweet 16, but they all lost in multiple heartbreaking ways before the Elite Eight. We’ll take a brief look ahead to next season in Livin’ B1G.

Zak Showalter’s discount double check moment seemed to be something of destiny for Wisconsin. How could the Badgers, who had knocked off defending champion Villanova to advance to the Sweet 16 as a No. 8 seed, possibly lose after that incredible shot?

Chris Chiozza had the answer. His running 3-pointer as time expired in overtime gave Florida an 84-83 win Friday night and knocked the last remaining Big Ten team out of the NCAA Tournament with a heartbreaking thud.

There’s something to be said for the Badgers’ accomplishment of making it even that far, but the fact still remains – the Big Ten got shut out of the Final Four in back-to-back seasons. That hasn’t happened since 2003 and ’04. Pundits figured it would happen after giving the Big Ten a load of grief all year, although few believed the conference would have three representatives in the Sweet 16.

What seemed like a dud of a season for the Big Ten turned into one that supporters of the conference can at least be proud of considering no team had a seed better than No. 4. Sweet, for sure, but not quite elite.

Now that the 2016-17 is in the books for the Big Ten, let’s take a brief look ahead at how this year’s NCAA Tournament teams will look next season, and also delve into a couple other storylines in this edition of Livin’ B1G. 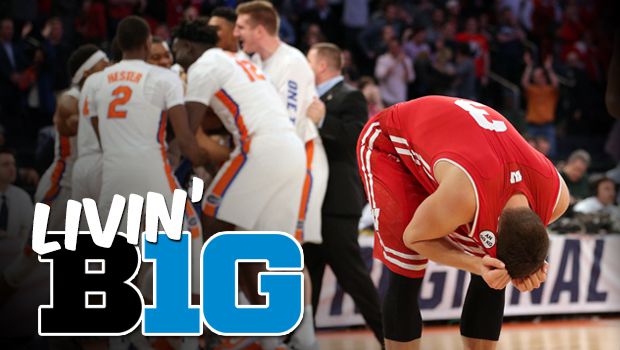 That loss to Florida is going to sting well into the summer, especially since it sent seniors Bronson Koenig, Nigel Hayes, Vitto Brown and Zak Showalter out in extremely disappointing fashion. That class is one of the most successful in Wisconsin history after advancing to two Final Fours, a national championship game and two more Sweet 16s.

Ethan Happ isn’t going to be considered a legit NBA prospect until he develops some sort of jumper, so he’ll be back next season. Coach Greg Gard has a pair of 4-star recruits coming in forward Nathan Reuvers and point guard Brad Davison, both of whom might have a lot on their plate with so many key players leaving.

It seems crazy now to think that Purdue led Kansas by eight points with less than six minutes remaining in the first half of Thursday night’s Sweet 16 matchup. The top-seeded Jayhawks outscored the Boilermakers 73-33 from that point on to walk away a dominating victory.

Caleb Swanigan is a first-round pick and will declare early for the NBA Draft, leaving a pretty sizable hole to fill. The good news is that Vincent Edwards, Isaac Haas, Dakota Mathias, Carsen Edwards, Ryan Cline and P.J. Thompson all should be back. Coach Matt Painter also has a commitment from 4-star Chicago-area forward Nojel Eastern, who could step in and start right away. Even without Swanigan, the Boilermakers could be a top-10 team.

It was a magical run for Michigan after its plane skidded off the runway prior to the Big Ten tournament, which it won before knocking off Oklahoma State and No. 2 seed Louisville in the NCAA Tournament. The Wolverines just didn’t have enough left to get past Oregon.

Derrick Walton Jr. and Zak Irvin were the catalysts for that surge, but they won’t be back next season. That doesn’t mean Michigan isn’t well-equipped for another run, though, with next season’s being less surprising. D.J. Wilson and Moe Wagner are budding stars. Former 5-star recruit and Charles Matthews will add another piece after sitting out this season following his transfer from Kentucky. Add in 4-star recruits Isaiah Livers and Jordan Poole, and the Wolverines could be very dangerous next season.

This was not the season Spartans fans expected from Tom Izzo after he brought in his most-heralded recruiting class, featuring Miles Bridges, Josh Langford, Nick Ward and Cassius Winston. But big men Gavin Schilling and Ben Carter didn’t play a second all season because of injuries, leaving Michigan State thin down low. That was exposed in its blowout loss to Kansas in the second round.

There’s slim hope that Bridges decides to return for his sophomore season, but that’s not likely to happen given that he’s a lock for the NBA Draft lottery. But if Izzo can get Ward, Winston and Langford to take steps forward and Schilling and Carter are granted another year of eligibility by the NCAA, the Spartans might be back. They also have 5-star recruit Jaren Jackson and 4-star Xavier Tillman coming in, and they might not be done on the recruiting trail.

A late-season swoon led to Maryland getting only a No. 6 in the NCAA Tournament, and it was bounced in the first round with a double-digit loss to Xavier. The Terps started three freshmen in Justin Jackson, Anthony Cowan and Kevin Huerter, though, and they’ll all be back next season.

The big question is whether Melo Trimble decides to return for his senior year. It’s been an offseason song and dance with him for three straight years now if he’ll declare for the NBA Draft. This year’s entrant pool is deep, and Trimble likely won’t be selected in the first round. He’s a solid college player, though, and might need to come back rather than risk having to fight his way onto an NBA team.

Northwestern got invited to its first-ever NCAA Tournament and beat Vanderbilt before falling to top-seeded Gonzaga in the most successful basketball season in school history. The best news? Most of its top players are coming back.

Bryant McIntosh, Vic Law, Dererk Pardon and Scottie Lindsey will be the driving forces for the Wildcats again next season, and they should be right up near the top of the conference again with that type of experience returning.

Coach Richard Pitino engineered a fantastic turnaround after the Gophers won only eight games last season, but they fell in the first round of the NCAA Tournament to No. 12 seed Middle Tennessee. Like Northwestern, though, Minnesota isn’t losing a ton other than Reggie Lynch and Akeem Springs.

Nate Mason should return, and freshman Amir Coffey could be a star. Jordan Murphy turned it on mid-season as well and showed what he’s capable of doing. Pitino also got a big commitment from 4-star point guard Isaiah Washington from the Bronx.

What else is new?

… Illinois missed the NCAA Tournament for the fourth straight season, and that was it for John Groce. Athletic director Josh Whitman made a surprising hire to replace Groce, bringing in Brad Underwood from Oklahoma State. I’m expecting the Fighting Illini to be in the Big Dance next season simply because of Underwood.