Dealing with the awful reality of Michigan State’s football season and other depressing developments around the conference in this week’s edition of Livin’ B1G.

Never in my life have I looked forward to college basketball season more than this year. And that’s saying something for someone who began recording every televised moment of the NCAA Tournament in third grade.

I’ve been through some rough Michigan State football seasons since I arrived there as a freshman in 2000, just after Nick Saban bolted for LSU. There was that 4-8 debacle in 2002 when Charles Rogers was a preseason Heisman favorite for what was supposed to be a solid Spartans team that wound up falling flat.

And, who can forget that other 4-8 campaign in 2006 as John L. Smith put a stamp on his inevitable firing, not long after having a meltdown on national television.

But nothing – I mean nothing – compares to this 11-month swing from the highs of a berth in the College Football Playoff to the lows of … well, whatever the hell this season has become. Mark Dantonio’s Spartans are 0-6 in the Big Ten for the first time ever, and they’re guaranteed to miss a bowl game following nine consecutive postseason appearances during Dantonio’s tenure.

Saturday’s loss to Illinois would be laughable if it weren’t so sad. The referees couldn’t even get through it. This lost season might be easier to accept if I knew the Spartans had simply given up weeks. It’s almost worse seeing that they’re actually giving maximum effort and realizing that they’re just really that horrible. I can’t keep from wondering how this all happened so quickly.

It’s no coincidence I wore my 2015 Final Four shirt to the office today. Tom Izzo and his stellar recruiting class featuring Miles Bridges begin the season on Friday night against Arizona in Hawaii, and I couldn’t be more excited for the tip-off that officially will shift my focus from this dismal football season into what should be a promising year of Michigan State basketball.

For the first time in years I don’t have the chance to root for two good Spartan teams around this point. And that’s depressing.

So, get ready to cry your way through this edition of Livin’ B1G, because we’ve got other depressing developments around the conference! 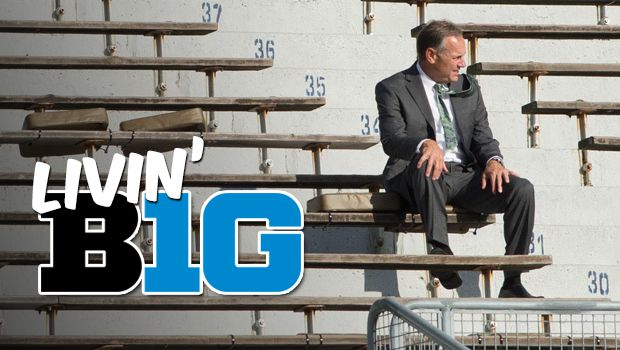 … I haven’t decided what’s worse – watching your team play out the string of a season gone by the wayside, or being a Nebraska fan and having to accept the fact their team isn’t nearly as good as some have made it out to be?

The Cornhuskers didn’t stand a chance against Ohio State on Saturday and got crushed, 62-3. It marked their second straight loss, and effectively removed the Cornhuskers from any College Football Playoff discussion – of which they shouldn’t have been involved in the first place. Nebraska didn’t beat anyone of significance before playing the Badgers and Buckeyes, and was finally exposed thoroughly in Columbus.

Sorry, Nebraska fans, but I don’t envy your position despite the Spartans being horrible. There will be a lot of people picking Minnesota in an “upset” this weekend – including me.

… But really, does it get any more depressing than Michigan State vs. Rutgers in the Battle of the B1G Winless Wonders?

… Michigan State’s fall from grace is definitely more significant than Iowa’s, but the Hawkeyes are quickly back to being a depressingly average football team. Saturday night’s 41-14 embarrassment at the hands of Penn State signaled just how far Iowa has fallen from last year, when it went undefeated in the regular season and was a defensive stop in the Big Ten title game from reaching the College Football Playoff.

Good thing Kirk Ferentz got what essentially amounts to a lifetime contract to remain in Iowa City, eh?

… Being a huge Big Ten supporter can be tough sometimes, especially working in an office full of SEC alumni and having them all think their brand is superior. But my colleague, Jonathan Bass, pointed out something to me this morning after he attended the Wisconsin-Northwestern game in Evanston that I couldn’t argue with – the Badgers aren’t very good, either.

It’s true that Wisconsin has a solid defense despite having to fight through injuries to that unit. But man, the Badgers’ offense is just terrible. Paul Chryst’s decision to play both Alex Hornibrook and Bart Houston is just flat out odd considering there wasn’t any consistency when only one was playing the entire game. I kind of feel bad Corey Clement is associated with the Badgers’ offense because he’s a good running back, but the opponents know he’s the only real threat when Wisconsin has the ball.

After the loss to Ohio State, I still believed the Badgers were the best two-loss team in the country. But after watching them struggle with Iowa and an overrated Nebraska team before needing three-and-a-half quarters to put away Northwestern, I can’t back up the argument that they should be in the top 10 of the CFP rankings.

… And now for some good news! From here on out, Livin’ B1G will be looking into both football and basketball around the conference. Five teams are ranked in the college basketball preseason AP Top 25.