Purdue’s Caleb Swanigan likely will be the Big Ten Player of the Year, but Ethan Happ is the force that drives the conference’s best team – the Wisconsin Badgers.

When I first set out to interview some of the top players in the Big Ten early last month, I made sure Purdue’s Caleb Swanigan and Wisconsin’s Ethan Happ were at the top of the list. Both were coming off solid first seasons and got off to great starts this year.

I don’t know if anyone realized just how good both players were going to be, though.

Swanigan put aside the NBA for at least another year, and that decision is paying off. He’s a candidate for national player of the year honors and almost certainly will win the Big Ten’s honor. Swanigan is averaging 19.1 points, is second in the nation in rebounds per game with 12.8 and leads the country with 20 double-doubles. He finished with 26 points and 10 rebounds in Saturday’s 73-72 win at Maryland, which helped Purdue jump seven spots in the new AP Top 25 to No. 16.

But sitting atop the Big Ten is No. 7 Wisconsin as Happ continues to emerge as a premier big man – not just in the conference, but in the nation. After Happ redshirted his first year with the Badgers, he won Big Ten freshman of the year last season and is currently Wisconsin’s leading scorer and rebounder.

Happ is averaging 21.6 points while shooting 64.2 percent over his last five games after netting 20 in the Badgers’ victory over Indiana on Sunday, which extended their winning streak to seven as they improved to 9-1 in conference play.

We see you Ethan Happ (@EthanHapp22), making it all HAPPen for @BadgerMBB against Indiana. #OnWisconsin pic.twitter.com/EszUzwSaDO

Swanigan gets most of the attention as the Big Ten’s top player – and rightfully so – but the two had an exciting head-to-head matchup Jan. 8. Swanigan finished with 18 points and 13 rebounds as Purdue dealt Wisconsin its most recent loss – 66-55 in West Lafayette – but he also committed eight turnovers. Happ, meanwhile, had 17 points and six steals.

Unfortunately, there’s no chance of a rematch unless the Boilermakers and Badgers meet in the Big Ten tournament. 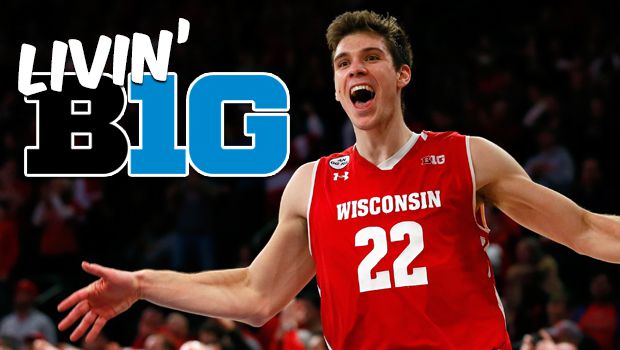 … Everyone tip your cap to Rutgers, which won its first Big Ten road game – ever. The Scarlet Knights went 0-23 away from home in conference play through their first two-plus seasons in the B1G before Saturday’s 70-68 victory at Penn State. Sure, Rutgers is still only 5-42 in Big Ten action since joining the league, but let’s not take away from its accomplishment. Rebuilding a program has to start somewhere.

… Yogi Ferrell played four fantastic seasons at Indiana, but the diminutive guard wasn’t selected in last summer’s NBA Draft. He got a couple of tryouts before latching on in the D-League. But Ferrell has been outstanding since signing a 10-day contract with the Dallas Mavericks, when he was forced immediately into a starting role because of injuries.

Ferrell has averaged 17.8 points and 5.0 assists in those contests after finishing with 32 points in Friday’s win over Portland. That earned him a two-year contract for the league minimum, but I’m sure Ferrell isn’t exactly complaining about the money. He’s just happy to be getting a shot in the NBA.

… How is Indiana faring without Ferrell? Not so hot. The Hoosiers entered this season as one of the most talented in the Big Ten, but they’re squarely on the NCAA Tournament bubble and are dealing with injuries to O.G. Anunoby and James Blackmon. Indiana dropped to 15-9 and 5-6 in the conference with Sunday’s loss to Wisconsin, its third loss in four games.

Blackmon is out indefinitely with a lower leg issue, and there hasn’t been an update on if he’s progressing. The Hoosiers host rival Purdue on Thursday.

… If you’re a gamblin’ man/woman, you might want to have Maryland on your radar. The Terps were 8-0 when entering games as the underdogs until the Boilermakers beat them Saturday. Still, Maryland covered the 1 1/2-point spread (or if you were lucky like me, you got the Terps plus-3 when the spreads came out) and have been the underdog in seven of its last eight games.

If Vegas wants to keep giving points to this solid 20-3 Maryland team with plenty of talent, I’ll just have to keep taking them.

… Northwestern jumped into the AP Top 25 in the final spot heading into last week, and promptly was left out of this week’s poll. But how many voters actually realize that the Wildcats played without leading scorer Scottie Lindsey in Wednesday’s 80-59 loss at Purdue?

Lindsey’s absence was huge blow to Northwestern as it leaned on Bryant McIntosh, who scored 22 points in 37 minutes. Research should be conducted prior to filling out the ballot rather than simply looking at wins and losses from the previous week. I’m guessing that some of the voters didn’t, and that’s the reason the Wildcats made only a one-week stay in the poll.