MAAC Basketball Coaches Rank the Best Jobs in the Conference

This is how polling in the MAAC shook out among coaches who voted, with one being the best and 11 being the worst: 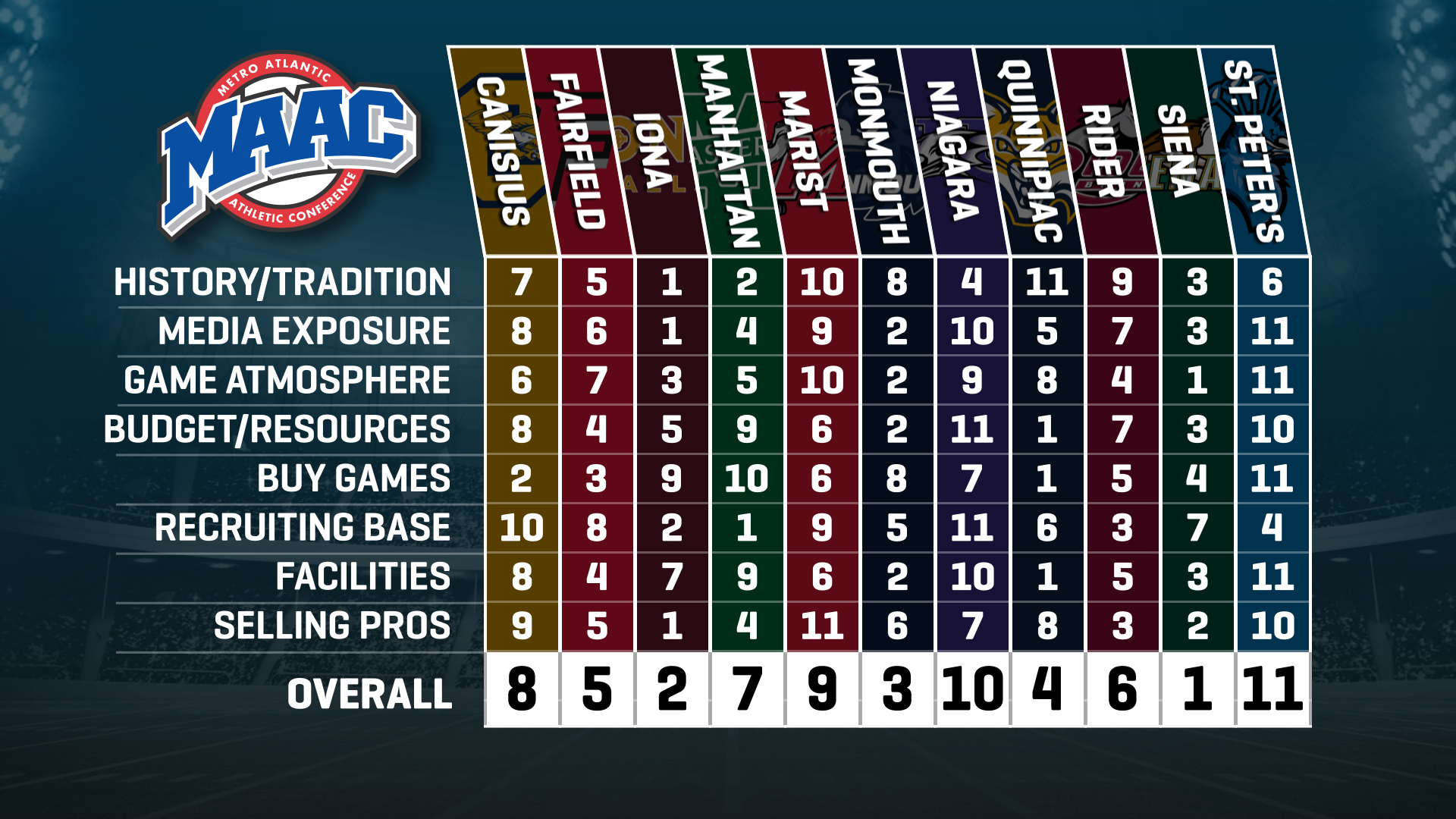 1. Siena (70) – The Saints have gone to the NCAA tournament six times. Mike Deane took them in 1989, Paul Hewitt a decade later, Rob Lanier in 2002 and Fran McCaffery three consecutive seasons from 2008-10. McCaffery won back-to-back first-round matchups against Vanderbilt and Ohio State. Siena ranks in the top four in seven of the eight categories, and is tops in game atmosphere.

Where they win: “The arena and the fans. The support is great all around.” – MAAC head coach

The knock: “The area. There just aren’t a lot of players close to Albany. That’s really the only major downside to the job, though.” – MAAC head coach

Where they win: “Tradition of success and the location in the New York City area. When you combine the history and the ability to recruit kids in NYC, it’s one of the best jobs in the league — maybe the best.” – MAAC assistant coach

The knock: “Facilities and fan support. It’s a commuter school, so that hurts. It doesn’t have the same type of support as a school like Siena.” – MAAC assistant coach

3. Monmouth (61) – The Hawks haven’t gone to the NCAA tourney since 2006, but King Rice had a big-time two-year run in which he won 55 total games from 2015-17. There have been four NCAA tourney appearances, with three of them coming with Dave Calloway (1998-2011) at the helm. Monmouth checked in second in four categories: TV exposure, game atmosphere, budget/resources and facilities.

Where they win: “Facilities and the support. Fans come to the games and the administration really supports the program.” – MAAC head coach

The knock: “Lack of tradition. They’ve had some recent success, but there have also been a lot of really bad years.” – MAAC assistant coach

4. Quinnipiac (55) – The program was in the NEC from 1998 to 2013 before moving into the MAAC. There’s yet to be an NCAA tourney appearance, but the Bobcats came close several times under Tom Moore, who had a trio of 20-win seasons in his decade at the helm. Quinnipiac ranks first in resources, facilities and buy games — and last in tradition/history.

5. Fairfield (54) – The Stags have gone to the NCAA tourney three times: twice under Mitch Buonaguro in 1986 and 1987, and once in 1997 under Paul Cormier. There have been some successful seasons since, but it’s been more than 20 years since Fairfield has been back — and that spans a trio of coaches (Tim O’Toole, Ed Cooley and Sydney Johnson).

Where they win: “Beautiful campus, high academic school, close to the beach, can get into New York City in an hour and one of the best facilities in the league.” – MAAC assistant coach

The knock: “Resources. They need to step it up from a commitment standpoint to be able to compete with the top programs in the league.” – MAAC assistant coach

7. Manhattan (52) – There have been eight NCAA tourney appearances, including a half-dozen since 1993. Fran Fraschilla took the Jaspers in 1993 and 1995, Bobby Gonzalez in 2003 and 2004 and current coach Steve Masiello in 2014 and 2015. Manhattan ranks high in history and recruiting base, but low in resources and facilities.

Where they win: “Tradition and the city. It’s a great place to live and also recruit with so many kids within a short ride.” – MAAC head coach

The knock: “The resources compared to the expectations. People expect them to compete for the league title every year, but they haven’t poured in the resources to be able to compete with the upper-tier programs.” – MAAC assistant coach

Where they win: “It’s a tough job, so you have to be creative. I guess Buffalo might be a selling point for some, but right now you aren’t beating UB for any local kids.” – MAAC assistant

9. Marist (39) – The Red Foxes went to the NCAA tourney in 1986 and ’87 under Matt Furjanic and Dave Magarity, but haven’t been since. They went from the NEC to the MAAC in 1997, and have had five coaches since 2007. They rank in the bottom three in five of the eight categories. John Dunne is in his first season since coming over from Saint Peter’s.

Where they win: “Academics and a beautiful campus on the Hudson.” – MAAC head coach

10. Niagara (28) – The Purple Eagles went to the NCAA tourney way back in 1970 under Frank Layden, and twice more with Joe Mihalich in 2005 and 2007. But this is a tough job. Other than history (Niagara produced Calvin Murphy and has also gone to the NIT 13 times with most of them coming in the 1950s), Niagara ranks in the bottom half of the league in every other category.

Where they win: “History is amazing, but a lot of it dates way back with Calvin Murphy and Hubie Brown.” – MAAC assistant

11. St. Peter’s (22) – The Peacocks have gone to the NCAA tourney three times: twice under Ted Fiore (1991 and 1995) and once under now-Marist head coach John Dunne (2011). Shaheen Holloway is in his first season at the helm, and has the most difficult gig in the league. St. Peter’s ranks in the bottom two in six of the eight categories.

Where they win: “Location. It’s in Jersey City, and you can get into NYC easy. The best thing about it is that there are players in the area, but other than that it’s a brutally tough job.” – MAAC assistant coach

The knock: “You name it. The resources, facilities, just about everything. Shaheen has a tough job ahead of him, but John Dunne proved that you can be competitive there even with all the drawbacks.” – MAAC assistant coach