This is how polling in the Mountain West shook out among coaches who voted, with one being the best and 11 being the worst: 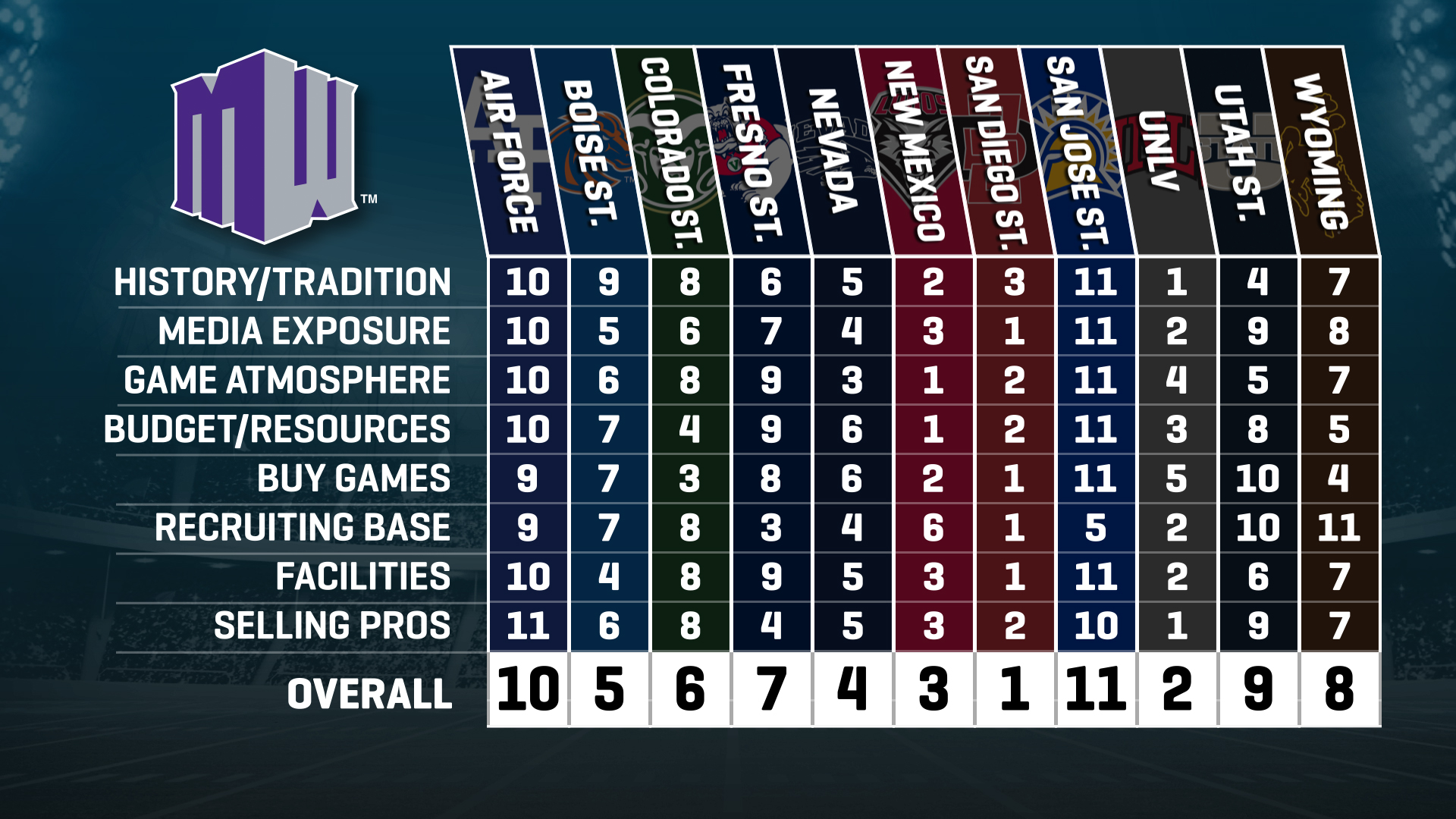 1. San Diego State (83) – The Aztecs program was irrelevant until Steve Fisher took San Diego State to the NCAA Tournament in 2002. Then the Aztecs went dancing for six consecutive seasons from 2010-15. San Diego State originally entered D-1 in 1970, but joined the Mountain West in 1999 after a long run in the WAC. San Diego State ranks first in TV exposure, recruiting base, facilities and also buy games.

Where they win: “Kawhi Leonard is huge for them to sell, they have a great atmosphere and obviously you’ve got the city of San Diego.” – Mountain West assistant

The knock: “Maybe the cost of living in the city, but the administration has stepped up in terms of staff salaries. The hard part for them now is they recruit against a lot of high-majors — Pac-12 schools — for players.” – Mountain West assistant coach

2. UNLV (76) – When Jerry Tarkanian was in Vegas, UNLV was considered one of the top programs in the country – winning the national title in 1990 and playing in the Final Four in 1977, 1987 and 1991. Tark went to the NCAA Tournament a dozen times during the stretch from 1975-91, but the program has been up and down since. Bill Bayno coached in the tourney twice, Lon Kruger made it four times in seven seasons and Dave Rice had a pair of appearances, but former coach Marvin Menzies didn’t get to the tourney in three tries. UNLV ranks in the top five in all the categories — including in the top two in history, TV exposure, recruiting base, facilities and selling pros.

Where they win: “Facilities, summer league and USA Basketball in town and tradition of success — even if it was a while back. There are also plenty of former pros.” – Mountain West assistant coach

The knock: “Revolving door of leadership, the investment doesn’t match the expectation and they are a victim of Tark’s success. No one can live up to that. And now pro sports teams are invading the city.” – Mountain West assistant coach

3. New Mexico (75) – There is history, but the Lobos haven’t been past the first weekend of the NCAA tourney since 1974. Dave Bliss (1988-99) went to the NCAA Tournament seven times while Steve Alford went three times in six years, but Fran Fraschilla (0-for-3), Ritchie McKay (1-for-5) and Craig Neal (1-for-4) weren’t able to get it rolling. The lone category in which New Mexico doesn’t rank in the top three is recruiting base.

Where they win: “The facility, the Pit and the fan support that comes with it.” – Mountain West head coach

The knock: “Unrealistic expectations and the pressure that comes with it, coupled with the fact that the resources aren’t what they used to be — including coaches’ salaries.”

4. Nevada (58) – The Wolf Pack had minimal success until Trent Johnson led them to the NCAA Tournament in 2004. Mark Fox then took Nevada dancing three times in five seasons before leaving for Georgia. The program took a dip before Eric Musselman arrived, guiding the Pack to the tourney each of the past three seasons.

The knock: “They don’t charter as much as many of the teams in the league, and it’s a fickle fan base. It’s a tougher job than people think – and Reno as a city doesn’t exactly have a lot of curb appeal.” – Mountain West assistant coach

The knock: “Got to get on a flight to get a player. There aren’t guys in Idaho. Budget and resources aren’t at the top of the league, but they are solid.”

6. Colorado State (43) – The Rams have played in the NCAA Tournament 10 times, registering Sweet 16 appearances in 1954 and 1969. There have been just a pair of appearances in the past 16 seasons – one from Tim Miles and one from Larry Eustachy. Colorado State’s budget and resources are towards the top of the league, but ranks in the bottom four in five different categories — history, game atmosphere, recruiting base, facilities and selling pros.

Where they win: “Best thing is the location and the campus. The city and downtown area is so unique.” – Mountain West assistant coach

The knock: “Fan support isn’t very good, and school is more difficult than most of the schools in the league academically.” – Mountain West assistant coach


7. Fresno State (41) – The Bulldogs have made the Big Dance six times, but only have one appearance since 2002 — under Rodney Terry in 2016. Fresno has a strong recruiting base and can sell Paul George, but it ranks in the bottom three in four categories: Game atmosphere, budget/resources, facilities and buy games.

Where they win: “The arena, Paul George, tradition and also the location – especially for recruiting.”

The knock: “Low operating budget, facilities and resources compared to much of the league, and the city of Fresno and the Central Valley isn’t where you would choose to live.”

8. Wyoming (40) – The Cowboys have made 15 NCAA Tournament appearances in program history, but only twice since 1989. There was a national championship way back in 1943 under coach Everett Shelton, as well as success in the 1980s when the ‘Boys went to the tourney four times.

Where they win: “Only D-1 school in the state, so the fan base is rabid, and they get plenty of resources from the state. The facilities are high-level.” – Mountain West head coach

The knock: “It’s a small college town about two hours away from a major city, and the weather is cold and snowy when the college hoops season is going on.” – Mountain West assistant coach

9. Utah State (34) – People forget how Stew Morrill had the Aggies rolling during his tenure — Utah State played in the NCAA Tournament eight times in a 12-year span from 2000 to 2011. Another dominant stretch could be right around the corner, as Craig Smith led the Aggies to the tourney this past season – his first at the helm. Utah State’s recruiting base is one of the worst in the league, but it has a committed student section and also can sell its history.

Where they win: “The student section is ridiculously good, the best in the league, and the program is supported at every level – administratively, financially and with the campus and community.” – Mountain West assistant coach

The knock: “It’s the third-best job in the state, and out-of-state recruiting is hard. No social life, and weather isn’t great.”

10. Air Force (17) – There have been four NCAA Tournament appearances for Air Force — in 1960, 1962, 2004 and 2006. The Falcons probably don’t belong in the league to be honest, and that’s what makes it one of the most difficult jobs in the entire country. Air Force ranks in the bottom three in every category.

Where they win: “They can sell academics and a guaranteed job after graduation. They are also unique within the league, and the kids they recruit aren’t being recruited by anyone else in the Mountain West.” – Mountain West head coach

The knock: “Academic requirements and even medical requirements. They have a strict schedule every day, so the program isn’t for everyone. There are strict rules while they are there, and they also don’t have as much time to devote to practice as other programs due to the cadet commitments.” – Mountain West head coach

11. San Jose State (15) – There’s not a whole lot of history with the Spartans. Just three NCAA Tournament appearances with the last one coming back in 1996 under Stan Morrison. The other two were in 1951 and 1980. Current coach Jean Prioleau is the fifth head man since Morrison to try and get San Jose State back to the tourney.

Where they win: “Weather. That’s it.”

The knock: “No support – financial or just about anything. I don’t think they care at all. It’s just not important. There are too many other things to do around there — San Francisco, the beach, etc.”